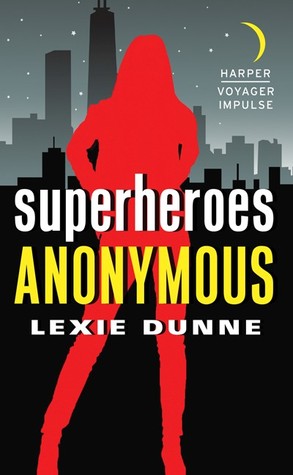 Everybody in Chicago has a “superhero sighting” story. So when a villain attacks editorial assistant Gail Godwin and she’s rescued by superhero Blaze, it’s a great story, and nothing more. Until it happens again. And again.

Now, the media has dubbed her Hostage Girl, nobody remembers her real name, and people are convinced that Blaze is just Gail’s boyfriend Jeremy in disguise. Gail’s not so sure. All she knows is that when both Jeremy and Blaze leave town in the same week, she’s probably doomed. Who will save her now?

But when the villains miraculously lose interest, Gail is able to return to her life…until she wakes up strapped to a metal table by a mad scientist who hasn’t read the news. Escaping, and now more than human herself, she’s drawn into a secret underground world of superheroes. She’ll have to come to terms with her powers (and weakness) to make it in the new society, and it’s not easy. After all, there’s a new villain on the rise, and she has her sights set on the one and only Hostage Girl.

As big a fan of superheroes as I am, I’ve actually read very few books that are superhero focused: Jennifer Estep’s Bigtime series, After the Golden Age by Carrie Vaughn, Shatter Me by Tahereh Mafi . . . maybe one or two others that didn’t immediately spring to mind, but that’s pretty much it.

Of those, Superheroes Anonymous is most similar to Bigtime, but that’s a very kind comparison . . .

“But why is Gail Godwin always getting taken hostage?” you ask.

And even Gail herself doesn’t know if that’s true. Her incredibly hot (but somewhat slacker) boyfriend Jeremy certainly could be her habitual rescuer Blaze, but . . . for whatever reason, Gail doesn’t think so.

But what she thinks becomes irrelevant when Jeremy breaks up with her, accepts a job transfer to Miami, and Blaze is seen rescuing new damsels in distress in the same city.

But at least she’s no longer getting kidnapped several times a week, right?

Someone didn’t the memo, and when evil Dr. Mobius snatches Gail from a local coffee house with the intent of performing Mad Scientist experiments on her, Blaze isn’t there to stop him.

After spending an indeterminate amount of time weighing the pros and cons of attempting to launch her own breakout vs. continuing to feel sorry for herself and waiting to be rescued, she eventually escapes (under dubious circumstances), stumbles into a bank robbery, and spineless-ninny-that-she-is, manages to occupy the villain until the superheroes arrive.

Then she blacks out.

She wakes up at Superhero Headquarters where she’s to be tested to determine the extent of the new villain-occupying abilities she now has thanks to Dr. Mobius’ aforementioned experiments.

And that’s pretty much all that happens in this book. Yeah, she finds out, once and for all, Blaze’s true identity, and yeah, the previously mentioned bank robber is part of a bigger sinister plot, but do we find out anything about that plot?

The book ends in a cliffhanger of DOOM, with us knowing neither what the Bad Guy is after, nor why it’s important, and with Gail being accused of being a Bad Guy herself.

Seriously. It’s like the book was cut in half, and that’s all we got.

Add to that Gail being a chump who calmly embraced her Hostage Girl status for years, and well . . . her incremental character growth wasn’t quite enough to overcome that less than flattering first impression.

Still, it was a highly entertaining read, and if you like mousy heroines who struggle with self-doubt, but (presumably) go on to eventually discover their self-worth, then I would definitely recommend Superheroes Anonymous. Whether you want to wait for the next installment, or dive in right now is your call.