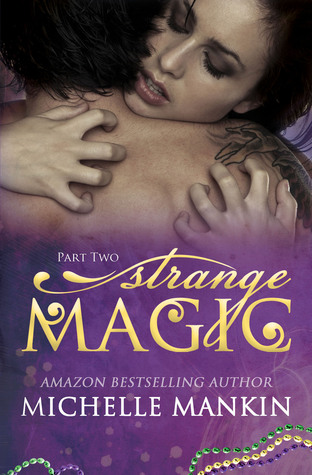 Billy Blade is a hardworking, hard living, razor sharp musical force. Mysterious behind his dark shades, the rough around the edges Texan mesmerizes with his haunting harmonica and tantalizes with his dangerous looks and smooth country charm. His latest album is topping the charts. He’s the newly crowned King of the Bacchus Krewe. He’s definitely living the rock star dream.

Exotic Creole beauty Thyme Bellerose couldn’t be more content. She has it all. An adoring grandmother. A handsome Tulane medical student beau. A satisfying job in the heart of New Orleans’ French Quarter. Her life is as rich as the ice cream she creates. She’s got everything under control.

But control is an illusion. Dreams can turn into nightmares. And now during Mardi Gras, otherworldly powers stand ready to shape their destinies in ways they could never imagine.

Shadow and light. Magic and mystery. Reality and myth. All come together in a place where rules bend and lines blur. Even those between life and death.

I had such a good time reading part one of this book, and because it ended with such a big cliffhanger, I continued on with the read as soon as I finished part one. Normally I don’t continue on immediately, unless I am totally loving the read, and this one had me invested almost from the beginning of part one. I should mention that if you have not read part one, and want to, then you probably should not read this review due to spoilers. And this one will make so much more sense if you read part one first, as this is not a stand alone book.

This one starts out ten years after the end of part one. Billy Blade is on vacation until his next country music concert, and has picked New Orleans for a place to both rest and take part in the Mardi Gras celebrations. He has rented an apartment, and it’s not long before he realizes that it’s haunted by a beautiful young woman. Thyme died ten years before, and haunts the apartment she shared in life with her grandmother. This is the beginning of Billy and Thyme’s love story. A ghost love story not your thing? This is very different I promise you, and well worth the read.

As in part one, I loved the character of Thyme. Even as a ghost, she hasn’t lost her caring personality, and her capacity to love. Only the object of her love is no longer Shane, but instead Billy. Shane is no longer in the picture-and that’s a whole other story which I won’t go into. Billy is a country mega star, but really down to earth. He’s had his own tragedy in the past. I really loved Billy as well, and the romance between them was so sweet and tragic, you know because she’s dead and all, and is what is known as a shade in this supernatural world. The villain of this story, as in the first part, is Leon. He is the embodiment of evil itself, and not human. To make it even more interesting, Zeus and Hades also show up in this installment.

New Orleans as a setting of a supernatural story is perfect. This takes it one step further, and puts the opening to the Underworld there. The Underworld depicted here is so different, and I found it fascinating-not something I usually am while reading stories featuring mythology. In this world, vampires, shades, demon dogs..the list goes on and on, all reside in the Underworld during the day, and spend their nights up above. That is just part of the excellent world building by this author. And there is quite a bit of world building-always a good thing in my opinion. There’s even a glossary at the end if you need any further explanation. While I didn’t need it with this book, there sure have been a few books that I wished had one!

As in part one, there are plenty of obstacles to overcome, villains to fight, and lot of new characters are introduced-most of which figure prominently, and either further the story or add to the main characters back story.

To me, this was a wonderful paranormal romance. It had all the elements I need in one, the supernatural couple, good sexy times, the paranormal elements, problems to overcome, fantastic world building, and just as important, no cliffhanger. Pretty perfect.