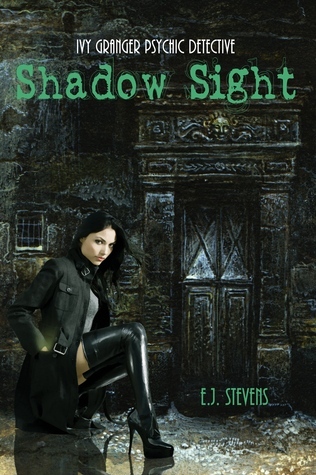 Some things are best left unseen...

Ivy Granger's second sight is finally giving her life purpose. Ivy and her best friend Jinx may not be raking in the dough, but their psychic detective agency pays the bills--most of the time. Their only worry is the boredom of a slow day and the occasional crazy client--until a demon walks through their door.

A demon attorney representing the water fae? Stranger things have happened. And things are about to get very, very strange as a bloodthirsty nightmare hunts the city of Harborsmouth.

There's blood in the water...

Kelpies have a reputation for eating humans. Unfortunately, kelpies are the clients. When an Unseelie faerie this evil stalks the waterways of your city, you have to make hard choices.

The lesser of two evils...

Shadow Sight is the first novel in the Ivy Granger urban fantasy series by E.J. Stevens.

One word. Fascinating. That describes this book to a tee. Other descriptions? World building that doesn’t quit. Wonderful heroine. And so much more. I first read, Hunting in Bruges, by this author, and loved it. I bought this book as soon as I finished that one and was just now able to get around to reading it. I found it worth the wait.

Ivy Granger is a private detective of the supernatural sort. She is able to touch an object, and learn things. Like where an object is, or who has the object. She has visions, and some are horrific. Due to those, she can never touch another person or even an object without getting a vision. That’s where the gloves come in, she has to wear them, no matter how hot the weather is, all the time, pretty much. Relationships with any man is pretty much not going to happen either, and she has learned to not yearn for one. When a demon lawyer comes to her for help, life in the city of Harborsmouth, will never be the same.

There was so much to love about this read. I absolutely adored Ivy. Her voice, while telling her story, in the first person, was nothing short of perfect, if you love a character with snark and just all around wit for days. Her roommate and business partner is Jinx, named that because she’s a complete klutz. However, she is excellent at her work-which is scheduling Ivy’s appointments, and doing all the paperwork. Equally important to this story is Kaye, an elderly witch that owns an emporium, and is a good friend to Ivy. Rounding out Ivy’s friends are Hob, Kaye’s kitchen brownie(and quite the character)and a young troll, named Marvin, who I promise will win your heart. I must add that there is someone that just might change Ivy’s dating life. I’ll leave that for you to find out!

I have honestly never read a book with this much world building. Some people might not like that, but I was fascinated by all the different species of creatures from the supernatural world that are explained in detail. A lot of these creatures are ones I have heard of, but there possibly(probably) are others that the author has dreamed up, and my does she have quite the imagination, if that is true!

Harborsmouth seems to be the hub for the supernatural in this part of the world. They live side by side unsuspecting humans. Most of them are Fae, and use glamour to hide what they really are. One of Ivy’s talents is to see past the glamour. Not only do they walk among humans, but I sure wouldn’t go in the water there. Water creatures and monsters abound there. A truly magical city, and not necessarily of the good kind.

The only young adult in this story is Marvin the troll, but I believe this is considered YA. However, there is plenty of violence, and gory deaths to be had in this read, so I would recommend this to older teens, up to adults. I enjoyed the whole read, and plan on buying the next one titled, Ghost Light.