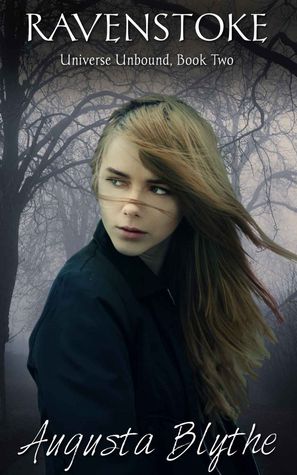 In WINTERBORNE, Loie and Mia's seventeenth birthdays brought more drama and surprises than they ever expected. Now, in Ravenstoke, they are adjusting to the aftermath and struggling to keep those newfound powers in check. When Andreas is called away to England under mysterious circumstances, a new guy is sent to Salcey Ridge in his place. Cian is smarmy and cocksure and Loie wants nothing more than to unleash a hellhound on him. Unfortunately, Cian isn't the only complication in their lives as the girls must also contend with the reappearance of Mr. Winterborne himself and Loie's most dreaded fear of all - a part in the school musical. Can the girls survive the rest of junior year unscathed?

Winterborne is the first book in this series, and I pretty much jumped straight into this second one as soon as I finished that one. There are going to be major spoilers ahead if you plan on reading Winterborne.

Now that Loie knows about what she is-a Universal-and knows about her powers, her life pretty much changes completely. Universals are humans who have evolved into a superior human being. They live among other humans, for the most part, although some do live in Sanctuary, a place in another world that is loosely connected to our world. Ancients are other supernatural creatures that hate the Universals, and cause huge problems for Loie and Mia. Loie spends most of her time in training for all her new powers as Andreas has taken on the role of her trainer. Loie is still crushing on him, but he loves Mia, Loie’s best friend. Mia is trying hard to embrace a world with no powers, now that she realizes she isn’t special. When Andreas has to go back to England for a top secret mission of sorts, Loie thinks she is alone in her training. When Cian shows up to train her, things get really interesting.

I really enjoyed Loie’s character in this book. She spent most of her life as Mia’s best friend and thought that Mia was going to be the special one. Now she is totally embracing what she is, and the powers she has, and how she controls them, was a fun part of this read. I did still like Mia as well, but the author didn’t shy away in showing Mia’s disappointment due to the loss of what she thought she was going to be. Andreas on the other hand lost a bit of his luster for me, and as Loie starts to think of him, he’s pretty vanilla. This is shown after Cian starts showing Loie all she can do, while Andreas was taking it all too slow. If Andreas is vanilla in his actions, then Cian is wonderfully chocolate. Speaking of Cian(pronounced Keane), he is like the bad, but fun hero, and Loie rebuffs him almost every step of the way. The banter between the two was a highlight for me in this part.

A change of scenery this time around, just added another dimension to this read. The girls travel to London, supposedly for the drama club, but Mia is just wanting to find Andreas. All kinds of adventures are had there by Loie, and more characters are added to the mix. But it’s when they get home that ramps up the story even more.

As with the first one, I found the writing to be good, the editing pretty exceptional for an indie read, and the premise, both unusual and perfect for a young adult(or adult)reader. The pacing was good, and the characters personalities fully developed. Of course that is all true of the first book as well. This is all just part of how well written this series is. Both of these were quick reads for me, and I am sure that is due to all the action, adventures, supernatural creatures, and of course Loie’s snark. Next up, is the last part of this trilogy titled, The Yawning Void, which I am planning to read soon. Did I mention there may be a war coming up between the Universals and the Ancients? Can’t wait to see where that goes.

Just a heads up, this is not a stand alone, and the books should be read in order.