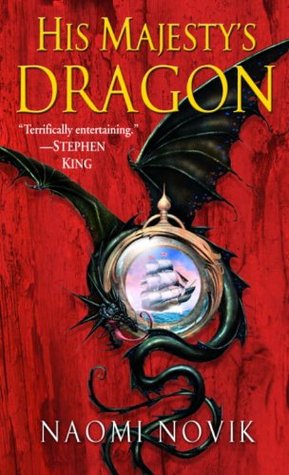 Aerial combat brings a thrilling new dimension to the Napoleonic Wars as valiant warriors ride mighty fighting dragons, bred for size or speed. When HMS Reliant captures a French frigate and seizes the precious cargo, an unhatched dragon egg, fate sweeps Captain Will Laurence from his seafaring life into an uncertain future – and an unexpected kinship with a most extraordinary creature.

Thrust into the rarified world of the Aerial Corps as master of the dragon Temeraire, he will face a crash course in the daring tactics of airborne battle. For as France’s own dragon-borne forces rally to breach British soil in Bonaparte’s boldest gambit, Laurence and Temeraire must soar into their own baptism of fire.

This isn’t my first Novik read. In fact, the whole reason I finally got on with reading His Majesty’s Dragon is b/c I read and absolutely adored Uprooted. But Uprooted isn’t being released until May, so this is the first Novik review I’ve posted.

Laurence is a Captain in the British Navy. He is a perfect gentlemen. He is ostentatiously dull.

And while there is significant character growth throughout the book, it is completely in regards to the small-mindedness that comes with his gentleman status, having no impact whatsoever on the dull, dull, dullness of his disposition.

And maybe this is irrelevant, and maybe it isn’t. I don’t know. What I do know is that b/c I have James Norrington in my head, every time Laurence is on the page—and that’s pretty much all the time—all I can think is:

Why on earth would you write a Norrington-like character, when you could write a Will Turner: Especially, when the Norrington-type character has a DRAGON? B/c really? What would Norrington do with a dragon?

Funnily enough, I now feel qualified to answer that question: not much.

That’s not to say it didn’t have its moments. Obviously, it did. B/c dragon.

Temeraire was probably my favorite part of the book. BUT. I couldn’t completely enjoy his character, b/c Novik states early on that Chinese dragons are bred for intelligence, and after establishing that fact, uses him to spout insightful and ahead-of-his-time political ideals. BUT. For an “insightful” character to be perceived as insightful (for me, anyway), he needs to be spouting universal truths, timeless wisdoms, or exposing easily overlooked, but once pointed out, clear flaws in a majority mindset.

“Some of the laws which I have heard make very little sense, and I do not know that I would obey them if it were not to oblige you. It seems to me that if you wish to apply laws to us, it were only reasonable to consult us on them, and from what you have read to me about Parliament, I do not think any dragons are invited to go there.”

Which, yes, is amusing, but not particularly clever.

I also enjoyed Laurence’s pragmatic observations, which were quietly humorous and made me snicker at regular intervals. Like when it’s discovered that the dragon egg they acquired will hatch before reaching land and one of the crew will have to bond with the hatchling, meaning that he’ll be forced to leave the respectable Navy to join the disreputable Dragon Aviators.

Laurence is determined—as any gentleman would be—to proceed in all fairness:

. . . though if Fanshawe had not spoken in so unbecoming a way, Laurence would have liked to keep Carver out of it, as he knew the boy had a poor head for heights, which struck him as a grave impediment for an aviator.

But regular though those intervals were, they were not enough to overwhelm the blah.

Most of the blah was the result of Laurence’s stodginess, but while it’s one thing to accurately reflect the attitudes of the period in which a book is set, it’s quite another to tacitly endorse them:

View Spoiler »“Laurence bowed to them both, though he had a sense of awkwardness for the first occasion since he had grown used to Harcourt. She was leaning with no appearance of consciousness against Choiseul’s shoulder, and he was looking down at her with undisguised warmth; she was quite young, after all, and Laurence could not help feeling the absence of any suitable chaperone.”

She was young. And in need. Of a chaperone.

The suggestion is bad enough, but when Harcourt was indeed taken advantage of by the dastardly Choiseul, thus justifying Laurence’s backward thinking . . . « Hide Spoiler

I also found it difficult to believe that a man so distraught over the inability to pursue elements essential to his own happiness—like a wife, children, and a quiet life in the country—after becoming saddled with a dragon, could transition into his new life so completely, even going so far as to compare overzealously praising Temeraire to the exasperating drivel spewed from men too enamored of their own relations:

With difficulty he restrained himself from boasting further; nothing, he was sure, could be more irritating, like one of those men who could not atop talking of the beauty of their mistress, or the cleverness of their children.

Then there were the inconsistencies. Like how Temeraire’s egg managed to survive aboard a cold, damp boat for a month or more, and afterwards being told that the dragon eggs are kept in hottest part of the training facility’s Roman baths, b/c the female dragons have neither the time nor inclination to sit on them until they hatch, and they can’t be buried in the hot ash at the base of a volcano, b/c no volcanoes.

I heard a sermon once where the pastor quoted something about the saints crying out, “How long?” in reference to church-services-that-never-end, and it was both shocking and hilarious enough to stick with me.

And when I found myself crying out, “How long?” several times while reading His Majesty’s Dragon, I was surprised b/c it’s not a particularly lengthy book.

SO. If you like novels of manners, the Napoleonic Wars, and dragons, then by all means, read this book. I am a lone quantity. Everyone else seems to LOVE His Majesty’s Dragon, it won all kinds of awards, and even I will admit that it is incredibly well written. Novik is a superb method writer, if there is such a thing. HOWEVER . . . if you aren’t crazy about the idea of a gentlemanly account of said war, but think it might be okay b/c DRAGONS . . . I strongly suggest that you are mistaken.

11 responses to “Review: His Majesty’s Dragon by Naomi Novik”