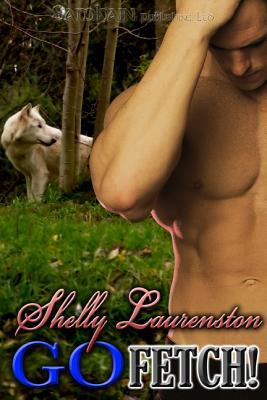 How much trouble can one small female be to a modern-day shapeshifting Viking? Well, it really depends on local gun laws. Conall Vga-Feilan, direct descendent of Viking shifters, never thought he'd meet a female strong enough to be his mate. He especially didn't think a short, viper-tongued human would ever fit the bill. But Miki Kendrick isn't some average human. With an IQ off the charts and a special skill with weapons of all kinds, Miki brings the big blond pooch to his knees - and keeps him there.

Miki's way too smart to ever believe in love and she knows a guy like Conall could only want one thing from her. But with the Pack's enemies on her tail and a few days stuck alone with the one man who makes her absolutely wild, Miki is about to discover how persistent one Viking wolf can be.

This book has been previously published and has been revised from its original release.

I read the first book in this series, Pack Challenge, last summer when I picked it up as a free read on Kindle. I had already been listening to the Pride series by Laurenston, so I knew I would enjoy the story. I was not disappointed. It took me entirely too long before I picked up book two of the series. Go Fetch! picks up about six months after Pack Challenge ends.

Go Fetch! features Miki, who was probably my favorite character in book one. She is a no holds barred human woman who tells it how it is. As much as I loved her in Pack Challenge, I like her even more as the star of her own story. We get to learn a lot more about her. Not only is she snarky, take no crap from no one type of girl; she is also extremely smart. She is working on her doctoral thesis. We also get to see a different side to her when she goes to a gamer party with her friends.

Conall Vga-Feilan, aka the Viking, is a werewolf and best friends with the Magnus Pack alpha. He gets smitten with the tiny, foul-mouthed black girl in the first book. He hasn’t been able to stop thinking about her since he met her. He can hardly wait for her to come for her visit on the way to give her dissertation.

This is a fun series with a lot quotable, make you chuckle lines. The characters are fun and well developed. There is even a cameo from a Van Holtz from the Pride series. The only issue is with some parts of the plot. There are some things that were left unexplained. I don’t know if these are wrapped up in the next book or not. I guess I will have to pick it up and find out.

“Good boy.” He could hear the condescension in Miki’s voice. “Now sit pretty.”

Sara slapped her hand over Miki’s mouth and shoved her back with the rest of the Pack. It amazed him Miki had lived this long.

“There are these fascinating places with books in them. They’re called libraries. When you’re not chasing your tail or balancing a ball on your nose, you should think about going to one.”

“Well, so you don’t get too cocky, I myself often complete the TV Guide crossword puzzle.” He puffed out his chest. “In pen.”