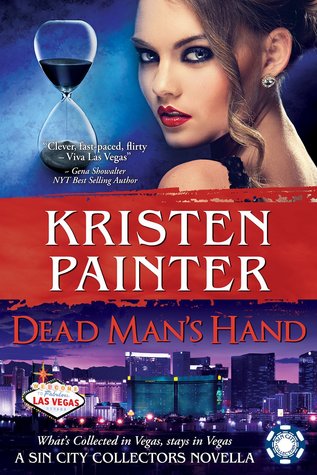 Demi-goddess and muse Seraphina Kostos has been tasked with bringing her employer’s wayward teenage daughter home. Not the hardest job Seraphina’s ever had. Until her boss calls in a favor in the form of extra help. The man who arrives is unlike any she’s ever encountered.

Sin City Collector Ares rarely goes on typical Collections. Mostly because his skill set involves taking lives, not saving them. As the son of a vampire and a grim reaper, his touch holds the ability to reap souls. Sure, it makes for a lonely existence, but he’s learned to deal with that. Or has he?

Beautiful Seraphina has him questioning everything he’s ever known. Living the rest of his life alone suddenly seems impossible. But what kind of future is there with a woman he can’t touch or hold or kiss?

This is the last book in the Sin City Collectors series (of all the novellas published as of this posting, anyway). I read this book out of order. I had the later books in the series already, so I went ahead and read them first. While the heroine for Double or Nothing is introduced in this book, I didn’t feel like I missed anything by reading out of order.

In Dead Man’s Hand, we have our hero, Ares, who is a wraith. In this world, wraiths are half reapers and half vampires. He is pretty much used by the Collectors for just one thing, his touch will kill anyone he touches with his bare skin. This had lead him to live a very lonely life.

The heroine, Seraphina, is a muse, or well, part muse. Her mother is a full muse and is a goddess,which makes Seraphina a demi-goddess. Seraphina knows little of her father and her mother has left her life. She now taken up residence with the artist that she works for and inspires. Her life is pretty lonely too. She never knows if it is her magic that is making someone drawn to her or if the person truly likes her.

These two are brought together to find the artist’s daughter after she had been kidnapped. They are very quickly drawn together. Ares constantly pushes her away, afraid that he would kill her if he touched her. While trying to find out if Seraphina is immortal, the story kind of takes a side trip. While, I didn’t love this side aspect to the story, there was a very interesting twist that comes up.

Dead Man’s Hand was another great addition to this series. The thing I like the most about this series are the unique species of supernaturals that appear in the stories. Yes there is a vampire and werewolf in the series, but mostly, it is mostly species you don’t see in other paranormal romance novels or even urban fantasy stories. They have all been quick and fun reads. They can each be read in any order you choose, as the stories are truly as stand alone set in the same world. I really hope that more stories come up in this series.