Hey-hey! I don’t get to feature Canadian authors very often, let alone ones that write kickass Urban Fantasy, so please give it up for Sierra Dean! BAYOU BLUES, the first installment in her SECRET MCQUEEN spin-off series is out today, and she’s here to shed some light on the heroine. The floor is all yours!

When I wrapped up the final book of the Secret McQueen series my first thought was: “I’m not ready to be done yet!” I almost changed my mind on ending things at book 8, but I knew that was the natural conclusion of Secret’s story. I’d put my vampire-werewolf hybrid through the ringer, and it was time for her to hang up her katana and have a happy ending.

But still, I’d spent almost a decade building her world. I loved my little urban fantasy universe and all the secondary characters who populated it. So, before the final “The End” was written on A Secret to Die For, I had already started planning a spin off.

There were plenty of characters I could have chosen from: Clementine, the snarky, independent young vampire we get to know in the final Secret book; Mercedes, a tough-as-nails NYPD Detective who knows the truth about monsters; or Kellen, Lucas’s human sister who married a fairy. As I write this list more and more come to mind: Ingrid, Sig’s daylight servant, or Rebecca, Holden’s maker. Any of these women could hold their own as a lead (and quite frankly, I might still write a series about any of them). But the character who I immediately gravitated towards was Secret’s little sister Genie.

Genie was introduced in Keeping Secret, the fourth book in the series, and my favorite to write. She was shy but independent, living in the woods with the her great-grandmother. Genie had a lot to learn, and I wasn’t able to delve into her character as much as I wanted to over the books she was in. We saw her pop up a couple times, but it wasn’t until the final book we got to see what she was capable of.

When I started plotting the spin-off, Genie was a natural choice for the heroine. She’s young, she’s smart, she’s more powerful than even she knows. I also liked the idea of exploring another hybrid story. Secret was challenged by her dual werewolf-vampire nature, and Genie is likewise learning how to balance her werewolf and witch heritage. She’s less conflicted about who she is than Secret, but is no less challenged by her powers.

In the Secret McQueen series we were instantly introduced to a character who believed she was strong and powerful and people loved her for her snarky, no-nonsense approach to the paranormal world she lived in. With Genie, things are different. She isn’t Secret, as she’s often reminded. She’s a softer, kinder character, and time will tell whether or not the supernatural world changes her, or how she evolves along with it.

I, for one, am so excited to get to spend this time with Genie, to learn more about her and have my readers dive back into the McQueen universe with a new tour guide.

Sierra Dean is a reformed historian. She was born and raised in the Canadian prairies and is allowed annual exit visas in order to continue her quest of steadily conquering the world one city at a time. Making the best of the cold Canadian winters, Sierra indulges in her less global interests: drinking too much tea and writing urban fantasy.


Ever since she was a young girl she has loved the idea of the supernatural coexisting with the mundane. As an adult, however, the idea evolved from the notion of fairies in flower beds, to imagining that the rugged-looking guy at the garage might secretly be a werewolf. She has used her overactive imagination to create her own version of the world, where vampire, werewolves, fairies, gods and monsters all walk among us, and she’ll continue to travel as much as possible until she finds it for real.


She’s also a book lover (of course!), obsessive collector of OPI nailpolish and the owner of way too many pairs of shoes. 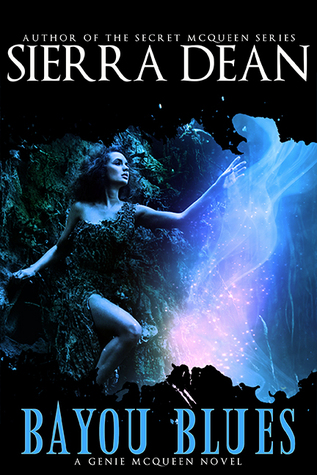 When your sister has saved the world, you have a lot to live up to.

Genie McQueen thought she’d seen it all after helping her big sister Secret stop the Apocalypse. The dead walked, New York City burned, and things nearly went to hell in a hand basket. After it was all over, the world knew about vampires and werewolves, and Genie’s life would never be the same.

But now, three years later, someone doesn’t want werewolves or any supernatural creatures to live alongside humans. A new anti-werewolf church with a charismatic leader and a cult-like following has declared open season on Genie’s whole species. When a member of her pack is kidnapped, she decides it’s time to stop going with the flow and to step up and fight for her people.

Tagging along for the ride is a handsome troublemaker, Wilder Shaw, a pack outsider who just wants to save his brother, but will leave Genie’s head spinning in the process.

Equally troubling are the ghosts of her past she can’t quite shake, the nightmarish figures who haunt her even when she’s wide awake, and a dark magic inside her she hasn’t yet learned to tame.

Things are about to get messy in the bayou.


March 20th couldn’t come soon enough as far as I was concerned because not only do I adore Sierra Dean’s writing and humour, but this spin-off series also promised more werewolf action than its big sister. I sometimes forget that SECRET MCQUEEN started out as 4-star reads, and didn’t wind up on my favourites pile until book 4, so when I loaded BAYOU BLUES up on my Kindle, my hope burned eternal. The story itself was tip-top, however like all younger siblings; I suspect that it’s going to take several installments for Genie to get out from underneath Secret’s shadow.

This novel had everything that I look for when I suss out Urban Fantasy titles: a resilient heroine, plot twists, budding romance, super-duper secondary characters, and dynamite paranormal elements. I wasn’t keen on the overdone anti-supe thread, although the author did modify it enough that the story didn’t suffer too much. The dialogue was shockingly snark-free; I missed the punchy one-liners that Dean’s other series is well-known for, and despite the odd funny bit, I found that the narrative was kinda stiff. I didn’t expect this spin-off to be a twin, but I did count on similarities.

Genie had some good, and bad traits; in the earlier chapters she was portrayed as doe-eyed, and naive, however as the book moved forward I found that she got her footing, and showed signs of being a protagonist that I could get behind. This installment transitioned her from spoiled royalty to fledgling leader; McQueen’s motivations were pure and well-intentioned, and it’ll be interesting to see how she handles Callum’s gift, her brother’s ambitions, and Pack politics. As a Princess, she needs to be more diplomatic than her sister, so Genie will doubtless be a different kind of heroine.

I was happy that the Church of Morning plot was dealt with in its entirety, and hopefully won’t be an on-going theme in this series, although I wouldn’t bet on it. Humans and supernaturals rarely coexist in harmony, but at least the author won’t be able to use this particular trope again. Still, it was an apt introduction to the new world order, and I enjoyed the smoke screens. I fully back Genie’s taste in men—Wilder Shaw, NOT Cash—and was crazy about fictional me’s debut even though it was short lived. I always knew that I wouldn’t last 2 seconds in UF!

My Urban Fantasy debut! And, of course I get offed. LOL Still cool! #BayouBlues #SierraDean