Hello! As a long time fan, and reader of Amber Lynn Natusch’s CAGED novels, I’m thrilled to be participating in today’s release day celebration of CONCEALED, installment #6.5 in one of my absolute top Urban Fantasy werewolf series. Please join me in wishing this gifted indie author a very happy book birthday! 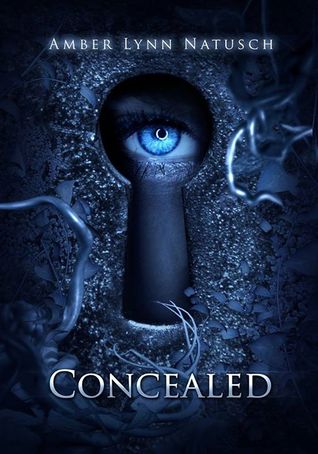 Our perceptions create our reality, even when they're wrong. Nobody understands this better than Gavin. Nobody.

To most, he is a shadowy agent of chaos. His motives are questionable, his methods bizarre. But his journey is one of both protection and redemption, and his story is yet untold. Until now. The past and present you think you know are about to change.

And you’ll never see Ruby, Gavin, or their relationship the same way again.

Caged, by Amber Lynn Natusch is one of my very favorite paranormal series. It takes the standard werewolf plot line, and amps it up to almost unrecognizable. Yes, this is about a werewolf, but one that is different from just about any of them out there-well, that I know about anyway. I do read a lot of werewolf shifter books, and when one of them is really different, that stays with me. I was lucky to find this series when I first started reading paranormal books again a few years ago, and have waited pretty impatiently for each to be released. There were three released when I started, and those three were read in a few days time. Couldn’t put them down.

Now that there is five books, and one novella, the plot has thickened to about the size of a redwood tree. This one is the second novella, and while short and easily read in an afternoon-I received it and read it all in a couple of hours today-it contains so many answers to so many questions that fans of this series have, and they are going to appreciate every word. Usually a novella is a short story about something not that important to the gist of the series, or a holiday read about the people from a series. Not so, when this author is writing. This novella is a very necessary part of the Caged experience. A must read in the order that the series goes in. Not a stand alone.

Answers. If you read Strayed, then you did get a lot of answers. Personally, I loved Strayed because it did answer so many of my questions-in addition to loving Ruby’s story as well.This is Gavin’s version of the events of the Caged series. Gavin has always been an enigma to Ruby(the main character)always alluding to things, or using veiled innuendos-anything he could do to keep Ruby guessing. In Strayed, we found out what Gavin is to Ruby’s, and really so much more. If I thought Strayed was the answer book, well this one is the answer book with the cherry on top.

Ruby. As a rare werewolf-actually the only one of her kind left alive, she is one of my favorite female characters to read about. She’s got snark for days, and for a long time, had no idea she was supernatural in any way shape or form. She also has an alter personality inside her-her wolf named Scarlet. Now she knows the back story of everything she has been through, the reasons, who she really is, all of it. Her love, Sean, is a son of the god of war, Ares, and has been tasked with destroying the very thing that Ruby is. Not going to happen of course.

So with this installment, Gavin, and all he is, and all his reasons finally come to light. The story behind the story, if you will. I have hated him pretty much since the first book he appeared in, and always wondered what his purpose was, and what he was as far a the supernatural aspect. Now with his story told, we are ready for the last installment, Betrayed, due sometime in 2015. And by the way, I no longer hate him!