Nice to be here on the Rabid Reads blog today! Carmel invited me over to share my upcoming release, Diamond Moon.

Diamond Moon is part of Decadent Pub’s Black Hills Wolves line, a multi-author series featuring the Tao Wolf pack of Los Lobos, South Dakota. Ross and Darci, my hero and heroine from Diamond Moon, decided to tag along and let me interview them.


Hi Ross and Darci! Thanks for joining me here at Rabid Reads. Please state your names. Also, do you have a nickname?

[box]Darci: “Hi, I’m Darci Diamond. When I was little, my dad used to call me DeeDee. Ross calls me Moonbeam. He says my pale skin reminds him of moonlight.


Ross: ::levels a heated stare at Darci:: Indeed it does, baby. Ross Luparell here. No nickname. Well, Darci calls me some interesting names when we’re intimate, but why don’t we let the readers learn that for themselves?[/box]


Fair enough. What is your hair color? Eye color?

[box]Darci: “My hair is black and short and a bit curly on the ends, styled in a pixie cut. I have green eyes, like my dad.”


Ross: I have brown hair with a lot of red in it. Shoulder length with some layers. My eyes are brown. Darci likens them to milk chocolate.”[/box]


I’d have to agree with Darci on that one. How old are you both? Oh, and occupation?

[box]Darci: “I’m 25 and fresh out of grad school, with a degree in Computer Science.”


Ross: “I love a girl with brains. I’m 29. I own a software company, though I’m currently overseeing some construction projects in Los Lobos. Building homes for the pack members who need them.”


Darci: “He’s being modest. He’s a freaking computer genius. And those homes? They’re gorgeous and he’s paying for all of them.”[/box]


Where were you born? Where have you lived since then? Where do you currently call home?

[box]Darci: “I was born and raised in Ashland, Oregon. I came to Los Lobos to get some help with my…well, I suppose that’s another thing for our readers to discover on their own.”


Ross: “That’s right, Moonbeam. I was born and raised in Southern Indiana. Used to run with the Wolf packs in Hoosier National Forest. I returned to Los Lobos to help families in need and make a home here with the Tao pack. My parents were Tao pack members when the former pack leader Magnus still lived.”[/box]


What is in your refrigerator right now? On your bedroom floor? On your nightstand? In your garbage can?

[box]Darci: “LOL, well, this should be fun… Okay, fridge first. The one back in Ashland, Oregon. I lived with my human aunt and she’s vegan so basically vegetables and fruit. She stocked local, organic milk, eggs and cheese for me since she figured my Wolf side would need some protein. Yep, it’s true—I’m a vegetarian shifter. I’ve never eaten meat in my life. As to your other questions…Nothing but the rug on my bedroom floor and garbage can is empty. I’m a bit of a neat freak. Computer tablet on my nightstand. I like to play video games before I sleep.”


Ross: “I’m a carnivore.” ::arches a brow at Darci:: “As it should be. You’ll find red meat, coffee, cheese, and beer in my fridge. Plus some veggies and fruit for Darci. My bedroom is fairly tidy, though you’ll find an array of cat toys on my floor. Books, too. Nothing in the bedroom wastebasket as my cat likes to push it over and attack any contents I’m foolish enough to leave in there. Don’t get me started about the ton of tissue he shredded the other day. What a mess…[/box]


Who are the people you are closest to?

[box]Darci: “My aunt. She raised me after my parents died. I was six when they…”


Ross: ::squeezes Darci’s hand:: Family is everything to me. My parents live in Indiana. I also have a brother and sister. Haven’t seen them in a while. Hope to rectify that soon.[/box]


Which words or phrases do you most overuse?

[box]Darci: ::grins:: “Well, I have no idea what I say, but Ross definitely goes overboard with the whole Moonbeam deal.”


Ross: “Hey! I resemble that statement. So there you have it: Moonbeam. That’s not likely to change. Ever.”[/box]


Thanks for chatting today, Ross and Darci! And thank you, Rabid Reads for having us all over for a visit!

He reached out with his Wolf senses. The feedback froze his fingers on the doorknob. Female. Damn, she smelled good. Human. Wolf. Wait…both? The copper tang of blood hit his nose. And injured.

He flung open the door. His abrupt move caught his visitor off guard, one small, white fist raised to knock. The woman startled and fell forward. Catching her, he pulled her inside, kicking the door shut with his foot.

She sagged against him, a shivering bundle of wet woman. Underneath the dampness, her scent drop-kicked his gut. Apples and cinnamon. Roses and honey. His body perked up, taking extreme notice. He fought the growl of possession threatening to tear out of his throat. Holy hell, had his potential mate just walked into his home in the middle of a storm?

The scent of her blood jump-started his brain into action. He lowered her gently to the floor. “Jesus. You okay?”

His instincts urged him to check her for wounds, but he was a stranger and didn’t want to spook her. But goddamn, he wanted to touch her. Peel off her wet clothes. See all of her. With a jacket covering her torso, tight jeans hiding her legs, and her ball cap pulled low on her face, all he’d seen so far was her quivering pale chin, full red lips, and those delicate, trembling hands.

“S-s-sorry, d-dripping all ov-v-ver your f-f-floor,” she said, teeth chattering. Her snow white fingers curled on the hardwood, arms trembling with her effort to keep herself upright. Blood streaked the wood. A line of liquid crimson slid down her jaw and dripped from her chin onto her jacket.

To hell with propriety. “You’re injured. Let me help you.” He pulled off her cap and damn near swallowed his tongue.

Big green eyes blinked up at him from a face so pale it made him think of moonlight. Drenched, short black hair lay plastered to her head, the ends framing features reminiscent of the fairies his sister loved to draw for the hidden-object games she designed. Ethereal beauty. My beauty. He stroked a knuckle down her cheek then ran his thumb over her soft, full lower lip.

She flinched and batted his hand away, falling to her side in the process.

Ross snapped back to reality with a healthy hit of guilt. “Shit. Sorry.” 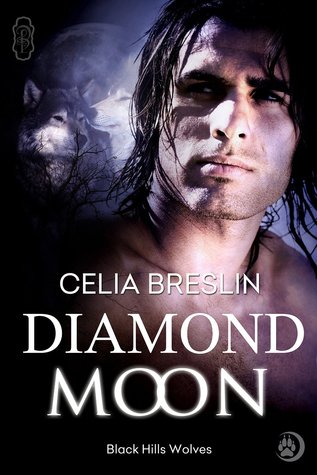 Human-wolf hybrid Darci Diamond spends every full moon locked in auntie’s basement in Southern Oregon. Her excruciating shifts terrify her, the last one causing her heart to stop beating. Seeking a cure, she journeys to Los Lobos.

Ross Luparell returns to the struggling Tao pack, using his millions made in the tech industry to build homes for pack families in need. He never imagined he would also find his one true mate. But when a hybrid with the biggest green eyes he’s ever seen lands on his doorstep in the middle of a wicked summer storm, there’s no denying it. She’s the one.

She wants a normal human life, free from pain-filled shifts. He won’t give up on her Wolf, and will do whatever it takes to help her accept her true nature. But can he convince her to trust him with her heart?


Having read and enjoyed two other books by this author, I was more than willing to read this one, in exchange for a fair and honest review. When I realized it was about wolf shifters, well that was just the icing on the cake for me. From what I can tell, this is the twelfth novella in the Black Hills Wolves series, all written by different authors. And yes, those are some novellas I will looking at when I want another good, shorter read in the future.

Darci Diamond is a wolf/human hybrid that pretty much grew up with only her human aunt, from the age of six. Therefore, there was no one to teach her about shifting, or about being a wolf in general. After shifting with each new moon in agony for years, she decides to go in search of her deceased father’s pack for help. She has some misadventures from the beginning, and ends up at Ross Luparell’s house in the middle of a bad storm. She thinks she is at a bed and breakfast(not), he thinks he has just met his mate.

I enjoyed both Darci’s character, as well as Ross’s. Darci has pretty much come close to death on many occasions due to shifting so she is pretty desperate. Ross is a super nice guy, rich, but using his money to build houses for homeless wolf families-of the shifter type. The villains come into the story due to who Darci’s father was, and what his job with the pack was-I won’t go into details but he wasn’t popular, to say the least. Since it was a novella, I don’t want to tell anything more about this story.

This read was a super sexy read, and I really enjoyed the main characters, and their romance. I was actually wishing for a much longer story, but since this is a novella series, I was okay with that. I would recommend this to adult shifter romance fans. All of this authors books have been good reads for me, and I look forward to my next one by her.

One more thing? I love this cover-one of my favorites of all the shifter books I have read!

18 responses to “Review and Character Interview with Celia Breslin, Author of Diamond Moon”