Good Morning, Rabid Readers! I’m pleased to welcome C.T. Adams, co-author of the A Tale of the Sazi and the Blood Singer series, who was accommodating enough to take the time from her busy schedule to answer a few questions about her new book, The Exile, the first installment of The Fae series.

1. In a lot of Fae-focused fiction, there are multiple Courts with the inhabitants of each being characterized by that court: Summer comprised of seelie, or light, Fae, Winter with unseelie, or dark, Fae, and Autumn and Spring somewhere in between. What made you decide to have one very diverse court instead?

[box]It occurred to me that it would be very interesting indeed if everyone had been in the position where they were forced to get along and, then later, to explore what happens when the system breaks down and they don’t. So I went there, and am finding myself enjoying the journey.[/box]

2. Brianna is half Fae, half human, and early in the book, it’s made clear that David, Brianna’s human employee and friend, is more than simply human as well. Is this just a coincidence, or will more humans/Fae of mixed heritage emerge to play a vital role in the series.

[box]In this world there used to be far more people of mixed heritage, but when Helena Jefferson closed off the veil it shut that down for a bit. But the Fae were a randy bunch and they do love babies, so there are probably more than a few people who have no idea . . . sort of makes you wonder about those folks who don’t seem to age at all hmnn?[/box]

3. Will the wall between the human and Fae realms come down? And if you can’t tell us that, what are some of the pros and cons of the wall coming down that we should be taking into consideration?

[box]It will come down at least briefly when Brianna lowers it to let refugees through to stay in places that had been prepared for them in advance by her father. And it is going to cause no end of interesting situations having that many Fae running around on earth. LOL.[/box]

4. You have a very interesting setup in regards to how Fate works in your world, with a new soul taking over for the maiden aspect when the crone is sacrificed (retired?), and the former maiden and mother aspects becoming their immediate elder. How much of the new soul’s personality is retained when it becomes part of the Fate entity?

[box]Quite a lot, actually. Which means that occasionally there are struggles for control within Fate herself. [/box]

5. It’s mentioned that Brianna trained as a guard, but her father removed her from duty. Can you tell us why?

[box]He wanted her to be available as a possible heir. Her mother didn’t. So the King overruled Helena and Brianna’s own wishes.[/box]

6. There also appear to be oracles that are separate from Fate. Both deal directly with foresight and prophecy, so how connected are they to each other? What are their specific roles?

[box]They overlap a bit. The Oracles are meant to only observe (and inform the King and the people, particularly with regard to suitable heirs); Fate is more hands-on.[/box]

7. How many installments do you have planned for The Fae?

[box]I’ve been contracted for 3 thus far, but there may well be more, particularly if it is well received.[/box]

8. Your Blood Singer series has been on hiatus for awhile now. I saw in your newsletter that you’re working on a short story from that world, but will there be any more full installments in the immediate future?

[box]Actually, I’m in the middle of editing the next book in the series. It’s called ALL YOUR WISHES, and I’m very excited about it.[/box]

C.T. Adams is a USA Today bestselling author writing individually and with Cathy L. Clamp. The two of them are now also co-writing under the pen name CAT ADAMS!
Website, Blog, Facebook
[/author_info] [/author]
My Review 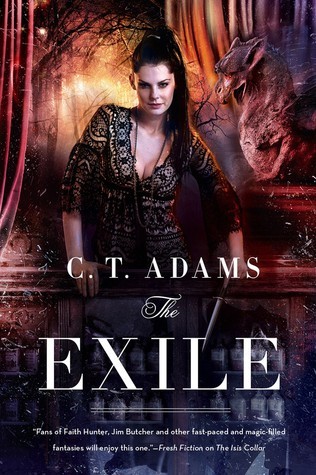 Brianna Hai runs an occult shop that sells useless trinkets to tourists—and real magic supplies to witches and warlocks. The magical painting that hangs in Brianna's apartment is the last portal between the fae and human worlds.

A shocking magical assault on her home reveals to Brianna that her father, High King Liu of the Fae, is under attack. With the help of her gargoyle, Pug, her friend David, and Angelo, a police detective who doesn't believe in magic, Brianna recovers what was stolen from her and becomes an unwilling potential heir to the throne.

A suspenseful urban fantasy with a hint of romance, The Exile is the first solo novel by C. T. Adams, who is half of USA Today bestselling author Cat Adams. Like the Cat Adams Blood Singer novels, The Exile is set in a world where magic is real and contains Adams's trademark blend of suspense, action, humor, and strongly emotional writing.


So. The Exile got off to a bit of a rocky start for me.

Actually, that’s not true. The very, very beginning was excellent. There was a truly spectacular prologue involving the High King of the Fae and this really cool Fates/triple-faced goddess mashup person . . .

YES. That does sound awesome, doesn’t it?

BUT. Between the awesome prologue and the first 7 chapters, there were 7 POV changes, and 6 different POVs.

That’s a lot. Even for me, and I’m used to the multiple and frequent changes in perspective that come with reading high fantasy.

Then there was this weird altercation with the High King (Leu) and some pixies . . .

We come in after it’s over and a multitude of pixy corpses and one dead guard are on the ground. Leu’s friend (a DRAGON) shows up, and almost immediately, Leu is attacked again, this time by High Fae, with the pixies fighting on his behalf.

So the pixies attack Leu, he kills them, then he’s attacked AGAIN, but this time they’re all on the same team?

To be fair, some kind of discussion transpired between Leu and the surviving pixies between battles, but it took place so quickly that the transference of allegiances was unclear, and then, “Oh no, more assassins!” so we’re forced to just roll with the punches.

I like to have a clear understanding of what is going on and why.

Not confusing, but still aggravating were the numerous asinine detailings of random and ordinary car-type things:

He hit the button to unlock it and climbed behind the wheel, shivering a little. The temperature had dropped with the sunset, Starting the engine, he turned the defroster all the way to high so that it would clear the fog from the windows as it heated the cabin.

There were several other drawn-out, worthless car-thing descriptions, as well as numerous throwaway comments about car alarms beeping in time with flashing brake lights and the like, AND WHO THE HELL BLOODY CARES?!

Stranger still were the awkward metaphors like, “Shaking herself like a dog shedding water,” and the use of dated jargon like, “She was one tough customer.” The love interest restrains himself from “giggling” b/c it would be “very unmanly.” *rolls eyes*

It wasn’t all bad. It wasn’t even mostly bad, and once Adams found her groove, the distracting and unnecessary details, the inelegant turns of phrase, and jarring changes in perspective became fewer and further between.

There were several especially interesting characters, my favorite being one of Brianna’s many half-sisters, a full-blooded Fae who lets her other brothers and sisters believe she’s as dimwitted as her lovely, but less-than-clever mother had been, and for once that type of behavior is okay, b/c it’s about survival.

The various types of trolls and other lesser Fae have a lot of potential too, and if it strikes you as an unlikely coincidence that Bri, a half human who doesn’t look down her nose at them, is the most attractive choice of leader for those scorned and often mistreated Fae, LKH is listed as one of Adams’ favorite authors on her blog page.

Overall, The Exile by C.T. Adams is a satisfactory start to my FAEvorite type of Urban Fantasy series. Full of plotting and scheming High Fae, a variety of clever, bloodthirsty trolls, and kittens in need of rescue from BBQ-happy doxies, this first installment of The Fae will ensure that you stick around for the next chapter. Recommended.

20 responses to “Author Interview & Review: The Exile by C.T. Adams”