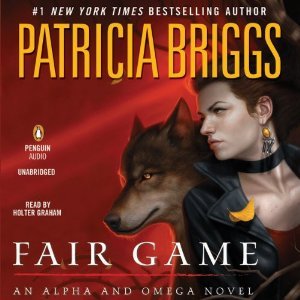 It is said that opposites attract. And in the case of werewolves Anna Latham and Charles Cornick, they mate. The son—and enforcer—of the leader of the North American werewolves, Charles is a dominant Alpha. While Anna, an Omega, has the rare ability to calm others of her kind.

When the FBI requests the pack’s help on a local serial-killer case, Charles and Anna are sent to Boston to join the investigation. It soon becomes clear that someone is targeting the preternatural. And now Anna and Charles have put themselves right in the killer’s sights…

I’m used to the events in series installments taking place a few weeks, if not days apart, so I was a little disconcerted by the fact that FAIR GAME jumped two full years into the future. In HUNTING GROUND Bran was still contemplating bringing the werewolves out to the public, but in this audiobook it was a done deal, and Anna & Charles are now dealing with the fallout. As a result, I experienced some mild growing pains while getting up to speed; luckily I had Briggs’ MERCY THOMSON series to help make the drastic shift in gears less jolting. I was chagrined to learn that one of my favourite werewolf couples were no longer in a happy place, however the decade’s long murder spree, and smoothly crafted fae mythology proved to be satisfying distractions.

Up until this point, Charles & Anna have been flying solo with regards to their investigations, so it was a hoot watching them join their efforts with various federal organizations in order to stop a killer. Latham was Cornick’s designated handler, and the outcome was quite comedic as you can probably imagine. I especially liked Anna’s list of do’s & don’ts around her mate, and the PR tangent was good for a few laughs too. As previously mentioned, these two have hit a rocky point in their relationship, mostly because Charles’ enforcer role is beginning to wear on him thanks to stricter penalties towards misbehaving werewolves. I love how even when this couple is at their lowest they still continue to communicate, and resolve their problems angst free.

The fae have always played an active role in Briggs’ universe, and I was excited to finally learn the real reason why they retreated to their reservations in her MT books. I never realized that such an important segment was missing until this newsflash roared to life, and forced me to revisit everything that I’ve learned to date in both worlds. This author sure knows how to give her protagonists a deserving foe while also ensuring that all of the secondary characters have a big impact on the overall story. I liked how Leslie’s plot thread popped up throughout the novel when you least expected it to, and I really hope that she makes an encore appearance in this series.

The moment I hear Holter Graham’s voice, I immediately slip back into the ALPHA & OMEGA frame of mind. He’s brought something extra to every installment, and in this latest one it was his Boston accents. His attention to detail never ceases to amaze, from the consistency of the protagonists, to the slight differences between Charles and Brother Wolf’s tones. Several new characters were added, and he made it easy to identify each and every one of them. Graham’s delivery has improved a great deal when compared to the first audiobook which I still adored, and as a result, he’s now among my top three male narrators.

FAIR GAME was an experience that bears repeating; I don’t do re-reads very often, but this series is worthy!