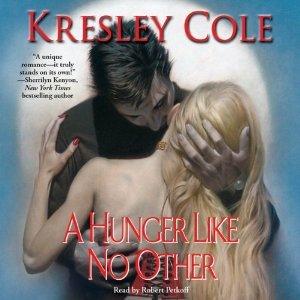 A mythic warrior who'll stop at nothing to possess her....

A vampire captured by her wildest fantasy....

Sheltered Emmaline Troy finally sets out to uncover the truth about her deceased parents - until a powerful Lykae claims her as his mate and forces her back to his ancestral Scottish castle. There, her fear of the Lykae - and their notorious dark desires - ebbs as he begins a slow, wicked seduction to sate her own dark cravings.


Thank you Melanie from Hot Listens for the recommendation!

After a lot of arm twisting by fellow readers, getting hooked on Cole’s writing via THE ARCANA CHRONILES, and listening to a sample of Robert Petkoff’s orgasm worthy narration; I finally caved and committed myself to yet another series addiction. I enjoy Paranormal Romance, although somewhat sparingly because action is my one-and-only true love. Ok, that’s not entirely accurate, werewolves are but the two go hand-in-hand, and this audiobook has both AND toe curling hooks ups, so really A HUNGER LIKE NO OTHER was win / win / WIN!

You know an author is truly adept when she manages to take two elements that rank fairly low on your list of awesome, and makes you love them. I strongly dislike immortal virgin heroines because honestly, how can one live for centuries and NEVER get it on? Granted, Emmaline hasn’t hit the 100 year mark, however Cole spun her innocence in such a way that even I was completely sold. And secondly, Valkyries have become more common in Paranormal than vampires and the female protagonist just so happens to be a mix of the two, and yet I couldn’t have cared less because her character was so well developed that I saw her as a person rather than just the sum on her preternatural parts.

Lachlain was barbaric, offensive, and presumptuous; he whisked unwitting little Emma away to his Scottish castle, tried to force himself on her, and strong-arm her into becoming his werewolf queen—I loved it! The chemistry between them was downright savage. MacRieve hates himself for being unable to resist his mortal enemy, Troy is repulsed by his Lykae nature, and yet they are inexplicably drawn to each other like moths to a flame. Their relationship and the mind blowing romp that followed were indeed show stoppers, however the praiseworthy world-building surrounding the Lore wasn’t too far behind. The plot wasn’t exactly cutting-edge, but enough secondary threads were brought in to keep IMMORTALS AFTER DARK going for a good long while.

As much as I enjoy Cole’s writing style, it was Robert Petkoff’s come-hither brogue that made thirteen+ IAD installments seem like a walk in the park. Yes, the number of pages involved is intimidating, but when you convert them into hours upon hours of listening ecstasy, the only conceivable answer becomes “Where do I sign-up?” His female voices were surprisingly genuine, and there’s no denying the sex appeal of his Scottish accents. Lachlain as a character was… abrasive, however Petkoff’s rendition made him ridiculously irresistible. Now I finally understand why all of my reviewer peers are fawning over this narrator; he truly is in a league all of his own.

A HUNGER LIKE NO OTHER made me want to give real life the middle finger, and get drunk on IAD until I overdosed.

19 responses to “Audiobook Review: A Hunger Like No Other by Kresley Cole”