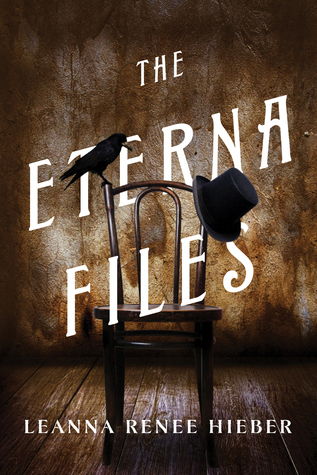 London, 1882: Queen Victoria appoints Harold Spire of the Metropolitan Police to Special Branch Division Omega. Omega is to secretly investigate paranormal and supernatural events and persons. Spire, a skeptic driven to protect the helpless and see justice done, is the perfect man to lead the department, which employs scholars and scientists, assassins and con men, and a traveling circus. Spire's chief researcher is Rose Everhart, who believes fervently that there is more to the world than can be seen by mortal eyes.

Their first mission: find the Eterna Compound, which grants immortality. Catastrophe destroyed the hidden laboratory in New York City where Eterna was developed, but the Queen is convinced someone escaped—and has a sample of Eterna.

Also searching for Eterna is an American, Clara Templeton, who helped start the project after the assassination of Abraham Lincoln nearly destroyed her nation. Haunted by the ghost of her beloved, she is determined that the Eterna Compound—and the immortality it will convey—will be controlled by the United States, not Great Britain.

But it wasn’t just the early years, I loved Anne’s adult years too.

If Anne Shirley were a real person alive today, and had an interest in paranormal alternate history, this is the kind of book she would write:

“Is that all, milord? I’ve left my dear wife anxiously awaiting her surprise: a trip to Paris. She’s impossible when she’s impatient . . . and she’s never patient,” he added with a smile that spoke of the throes of young love.”

The Eterna Files was resolutely Victorian, at times being whimsically funny, floridly embellished, and frustratingly redundant on points of feminine equality.

I feel like it’s important to say that this book was well-written and entertaining enough that I didn’t lose my patience with it until the very end.

What was so dreadful about the end?

*harrumphs* Only that it ended mid-climax. That’s all. No big. *shrieks* *gnashes teeth* *glowers*

I kept pushing the arrow button, over and over, half a dozen times, thinking my kindle had chosen an inopportune moment to go wonky, before I realized that, NO, it was over.

And ending mid-crisis highlighted how, for more than one reason, it felt like half a book.

Steampunk is not a genre that I’ve had much success with. There have been a very few exceptions, but mostly I’ve found it to be tech-heavy and plot-lite, and I assumed that was what prevented me from enjoying it more.

But here’s the thing—The Eterna Files is not steampunk. In fact, it’s so absolutely not steampunk that I had to add “alternate history” to our genre list. But still . . . I found my eyes glazing over in the manner to which I’d become familiar, b/c bored with the flowery descriptions of corsets, petticoats, and fascinators.

And while I am (of course) sympathetic to the plight of women who had yet to be seen as equal and independently worthwhile human beings . . . finding new and creative ways to highlight that point every few pages became tiresome.

There. I said it. All the “woe-is-me, corsets” and “unfair, unfair, unfair” got tiresome, I was tired. *straightens backbone* (b/c no corset).

And b/c of the era’s preoccupation with ghosts and communicating with ghosts, nine times out of ten any paranormal elements in this type of book are going to be in relation to that obsession, which in turn lends a gothic feel, neither of which am I very fond. *sighs*

So that’s something to take into consideration—if you like Victorians and Victorian things, there’s a strong possibility this book will go much better for you. I consider it a lesson well-learned.

Back to the earlier point, two stories are taking place simultaneously, one in New York, the other in London. In both places a team of scientists trying to find “a cure for death” have gone missing. For some reason, the London powers that be believe the Americans have greater and more extensive research on the subject, so they dispatch a spy to recover said information, b/c much like the Space Race of the ’60s, both countries are determined that they be the one to succeed, this time in thwarting death, a concept that I found completely ludicrous. I mean, how can you even say, “a cure for death,” without Phantom of the Opera-like organ music blaring in the background?

Regardless, the teams are working in tandem, each trying to beat the other, each trying to discover what happened to their scientists, a circumstance that cannot be unrelated, so you know that they will eventually, inevitably overlap . . . but it never happens. Just before the end (mid-crisis, and NO, I will not let that go), plans were finally in place for the English to cross the pond, but this was not a particularly short book, and I can’t help but feel that ultimately . . . not much happened.

Overall, not for me, but maybe for you. If you prefer Ann Radcliffe or the sisters Brontë to Jane Austen, I say give it a shot. Likewise, if you like ghosts and melancholy, or you think stealing (or making) corpses for nefarious experiments is deliciously creepy, rather than grotesque, The Eterna Files by Leanne Renee Hieber could very well be your next great read. However, if you are like me, and all of those things are at best “meh” and at worst “ick” then I would move on to less dreary cityscapes. Recommended, with qualifications.

54 responses to “Review: The Eterna Files by Leanna Renee Hieber”