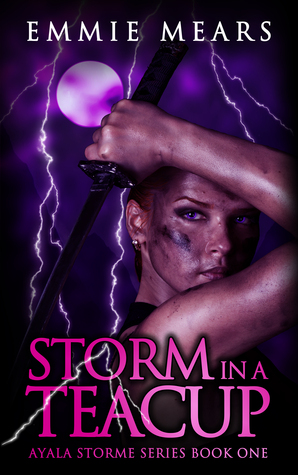 Mediator Ayala Storme kills demons by night and handles PR by day. She avoids Mediator luncheons and a fellow Mediator who’s been trying to get in her pants for years. She does her job. She keeps her sword clean and her body count high. But when a rash of disappearances leads her to discover that Nashville’s hellkin are spawning a new race of monster on human hosts, Ayala will be the first line of defense against these day-walking killers. That is, until one of them saves her life. Dodging the Mediators and the demons alike, Ayala’s new knowledge of the hybrids’ free will challenges everything she’s ever known about her job. Racing the clock and trying to outrun her comrades and enemies alike, she’s not sure who will catch her first…

Brand new Urban Fantasy series? Gimme! I hadn’t heard the first thing about this book until the other day. I read the synopsis, immediately bought it, and had it read by the next day. I could hardly put it down.

Ayala Storme is a mediator, otherwise known as a demon hunter, with a wicked side of snark, and a love of bunnies(there’s a story there-I promise). In this author’s vision of the world, and America in particular, demons, witches, and psychics are real, and are known about by all humans. Demon hunters are born to it, and have the violet eyes to prove it. They are taken away from their parents at birth, and trained for a lifetime of demon killing. It’s a lonely life, but someone has to do it, so Ayala has taken to it like a duck to water. She lives alone, has no real friends, and works at a PR firm when not hunting-which is every night. Her favorite thing is her beloved sword, and she gets injured enough that she even has a special robe to wear while bleeding. Her demon hunting mentor is Gregor-the ultimate enigma. No romance there though.

When Ayala gets involved with a missing women case, one that coincides with imps wearing human hair necklaces, things get really interesting. Ayala begins living on little sleep, incurs lots of injuries, and eventually meets a new love interest. And, oh yes, writes a bunch of press releases at her PR job in the midst of everything. She takes multitasking up to a whole new level!

A new sort of creature has been introduced to the world, and I found the author’s vision of this to be very unusual. The author’s world building was fascinating even before that happens. I enjoyed some of the observations by Ayala, when she talks about a certain state being nothing but a sulfur pit, or different celebrities that are really part of the supernatural world. It caused me to laugh on more then one occasion while reading. The story is told in the first person, and at times, Ayala actually talks right to the reader. At first I wasn’t a fan of being talked to, but I got over it really fast because Ayala was such a likable character, and blessed with equal amounts of snark and spunk.

I can’t recommend this book enough. I enjoyed the characters, the demon fighting with non-stop action at times, and even hearing about all sorts of demons and how they can be killed. I found this whole read to be pretty unique when compared to other UF, I have read. This is an adult read due mainly to violence, and it’s really not for the squeamish. No details of the romance was given by me on purpose, because I don’t want to ruin it for the reader. Even though there is a romance, I don’t in any way feel this is a paranormal romance. I am really looking forward to the Fall of 2015, when the next one is released.

34 responses to “Review: Storm in a Teacup by Emmie Mears”