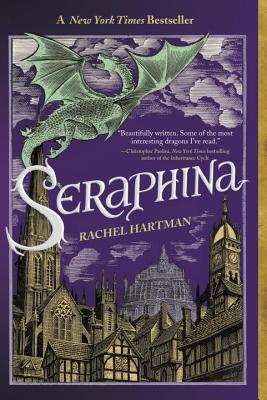 Four decades of peace have done little to ease the mistrust between humans and dragons in the kingdom of Goredd. Folding themselves into human shape, dragons attend court as ambassadors, and lend their rational, mathematical minds to universities as scholars and teachers. As the treaty's anniversary draws near, however, tensions are high.

Seraphina Dombegh has reason to fear both sides. An unusually gifted musician, she joins the court just as a member of the royal family is murdered—in suspiciously draconian fashion. Seraphina is drawn into the investigation, partnering with the captain of the Queen's Guard, the dangerously perceptive Prince Lucian Kiggs. While they begin to uncover hints of a sinister plot to destroy the peace, Seraphina struggles to protect her own secret, the secret behind her musical gift, one so terrible that its discovery could mean her very life.

In her exquisitely written fantasy debut, Rachel Hartman creates a rich, complex, and utterly original world. Seraphina's tortuous journey to self-acceptance is one readers will remember long after they've turned the final page.

The oldest of my three younger sisters loves books as much as I do, but doesn’t have nearly as much time to read (b/c reasons). Fortunately, I know her well enough to keep recs to what I know she’ll love, so she can make the best use of the time she does have, not begrudging me my surplus of time—b/c otherwise, who would weed out the mediocre books?

The most recent book I knew she’d love is this one, but I was rereading it before Shadow Scale is released next month, and I couldn’t remember if she’d already read it (b/c my memory is crap), so the day after I finished it:

Me: Hey, did you ever read Seraphina?
Sister: Sarah-what?
Me: Se-ra-phin-a. It came out like 5(ish) years ago. It’s about this girl who’s a half-dragon—
Sister: Ooohhh . . . I wanna be a dragon.
Me: Half dragon.
Sister: Or a half dragon.
Me: Would you really want to be a dragon?
Sister: Depends . . . Would I lay eggs, or have normal babies?
Me: Eggs if you were a dragon, babies if you were half dragon.
Sister: Then I want to be a dragon.
Me: o.O
Sister: Whatever, being a dragon would be awesome. Flying around, breathing fire, hoarding treasure—
Me: Actually, the dragon leader guy outlawed hoarding treasure, so now they hoard knowledge.
Sister: So I get to hoard books?!
Me: Yep.
Sister: Could it be any more perfect?

As I said previously, Seraphina (the MC, not the title) is a half dragon. As such, she belongs no where and to no one. Yes, there has been a tentative peace between the two races for the past fourty years, but humans are notorious for hating that which frightens them, and these dragons are rather Vulcan-like in their views on pesky emotions.

Vulcans don’t marry outside of their species (unless political reasons *squints at Spock, Sr.*), and they definitely don’t marry for love.

And humans are so horrified by the concept that they have half a dozen Saints encouraging medieval reactions to any cross-species dalliances. BUT they’re not too worried about it, b/c like that would happen anyway—everyone knows they should be killing the dragons (b/c dragons).

So Seraphina lives a solitary existence, in constant fear of discovery.

That sounds rather morose, doesn’t it?

Without undermining the relevant points being made, I will tell you that it absolutely isn’t.

In fact, it’s quietly hilarious. When Seraphina begins coming into her half dragon-ness as a preteen, she starts having seizures that are brought on by strange visions of even stranger creatures she’s never seen before. He uncle, on the dragon (or saar) side, asks that her father hand over the reins of her education:

“To you,” sneered my father. “And what will you do with her? She can’t go two hours without these infernal visions giving her seizures.”
“We could work on that, to start. We saar have techniques for taming a rebellious brain.” Orma tapped his own forehead, and then tapped it again as if the sensation intrigued him.

Why had it never struck me how deeply peculiar he was?

And once he has those reins:

He answered even my most impudent questions. Yes, dragons could smell colors under the right circumstances. Yes, it was a terrible idea to transform into a saarantras right after eating an aurochs.

Saarantras is a dragon’s human form, so you can see why it would be a bad idea to downsize so dramatically after aurochs consumption. *snorts*

Stuff like this is also why I believe in dragons, fyi. I mean, really . . . a dragon is basically a winged dinosaur: So the plot is fantastic. What about the characters?

My favorite after Seraphina herself is Lars, a blond giant, a foreigner, and a fellow musician. I would love him for his (not-so-vaguely German) accent alone:

Lars glowered defensively, as if he anticipated a scolding or a profession of love. Yes, that was it: he thought I meant to proposition him. He wore a closed expression, as if rehearsing a speech in his head, a way to let me down gently after I stripped off all my clothes. Sorry, Seraphina, I dondt like grausleiner thet can put their voices in my headt.

“I’m attracting small children,” Orma muttered, twisting his hat in his hands. “Shoo it away, will you?”

And when he allows himself to feel the things he’s so long denied, he is helpless to express them:

“Who will kiss you? Who will rock you to sleep?” His voice was slow, drowsy.
“You never did,” I said, trying to tease him. “You were more father to me than my father, but you never did that.”
“Someone should. Someone should love you. I will bite him if he will not.”

And finally, the princess, who is a bizarre yet winsome, combination of oblivious and ridiculous:

“Two Knights came to the castle today!” She could barely contain herself; her hands fluttered about like two excitable small birds . . . “They claim to have spotted a rogue dragon, flying around the countryside in its natural shape! Isn’t that awful?”
Awful enough to have her grinning ear to ear. She was a strange little princess.

While still somehow managing to be highly intelligent, and on occasion, even wise.

Ultimately, Seraphina is one of those books that never really goes away. Along with Poison Study, it was one of the first YA fantasies that I read and loved as an adult, so once again, I was worried about whether or not it would live up to my memories . . .

I should not have been. It was every bit as clever and amusing, as pertinent and thought-provoking, and as lovely and bittersweet as I remembered. Highly recommended.

And there’s also an excellent and short prequel novella that you can read for FREE here: Seraphina: The Audition (Seraphina 0.5) by Rachel Hartman