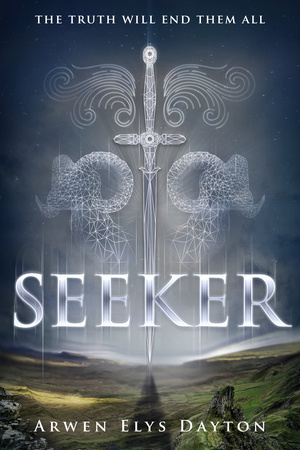 Quin Kincaid has been put through years of brutal training for what she thinks is the noble purpose of becoming a revered ‘Seeker’.

Only when it’s too late does she discover she will be using her new-found knowledge and training to become an assassin. Quin's new role will take her around the globe, from a remote estate in Scotland to a bustling, futuristic Hong Kong where the past she thought she had escaped will finally catch up with her.

My mother and I were at constant loggerheads when I was growing up, and the reason for that was simple: she hated being questioned as much as I hated being expected to blindly follow orders.

It was a problem.

Stubbornly, she’d rail at me, demanding I do things “b/c I said so” (<------not a reason), and equally stubbornly, I'd demand to know why . . . and despite her having all the power, and my stubbornness resulting in constant groundings, I never stopped demanding to know why I should or shouldn’t do a thing.

Am I comparing my mother to the particularly nasty breed of mercenary that Quin (our MC)’s father Briac is?

But I am explaining why I have a hard time being sympathetic to Quin and Shinobu (her cousin . . . sort of . . . )’s situation.

As hard as I tried to walk in their shoes, being “raised to obey Briac’s word as law,” was never going to be a circumstance I could empathize with.

Add to that the willful memory loss of one, and the rampant drug use/general recklessness of the other as coping mechanisms, and . . . yeah . . . REALLY not feeling these characters.

But there’s a reason for that: the more a work of fiction resembles reality, the less I am likely to enjoy it.

I know that about myself. It’s not a good thing or a bad thing, it’s just a thing. So if you like grittier plot lines where the characters behave disreputably, either b/c they are in fact disreputable and embrace it, or b/c they are weak, and deal with their guilt in realistic, vice-filled ways, then you might really like this book.

I didn’t have the same problems with Seeker that a lot of other readers had. As brief as the synopsis is, I actually read it (for once), and I thought it explained the situation fairly well. Quin has been trained all her short life to be a Seeker. She’s been told countless stories detailing the noble exploits of past Seekers. But when she actually becomes a Seeker herself, she discovers that she has been misled (<------gross understatement). What exactly is a Seeker?

Well, I’ll grant you that it was never said outright, but it was pretty obvious to me that a Seeker was a member of an organization of highly trained warriors whose purpose was to objectively right wrongs (whatever that means).

Over time, that organization has become corrupt, and they are now nothing more than an unscrupulous band of assassins. This transpired without intervention from the leadership, b/c, as is often the case with supremely long-lived beings, the person in charge is almost completely removed from the world, trusting his younger (though still very, very old) mentees to alert him to anything warranting his attention. BUT the elder of the two mentees is clearly corrupt himself.

Another complaint I’ve seen a lot is poor world-building, and it was definitely not a strength. However, as the world pretty clearly resembles our own, I didn’t find the lack of explanation too upsetting. I just assumed it was 100(ish) years in the future. The end. *shrugs*

Doesn’t sound so bad, does it?

Seeker is pitched as a book that defies genres. And that’s true. But unlike other genre-defying books, for example, Daughter of Smoke and Bone by Laini Taylor, the various genres didn’t really mesh together well. DoS&B is part urban fantasy, part fantasy, and it works b/c it takes place in two separate worlds. In comparison, Seeker tries to be both science fiction and fantasy in the same world . . . and it’s a house divided against itself.

The problem with trying to write a traditional “high” fantasy-type book, but having it take place in the modern (or slightly in the future) world is that who cares about a magic ATH-uh-may that cuts through space (like a . . . knife *rolls eyes*) when you could just take an airplane like a normal assassin? I mean, there are “air cars” that presumably fly, and I’m pretty sure they still have normal airplanes in addition to the weird airship thing that one of the characters lives on (and if they don’t, that’s stupid). And yeah, a magical cuts-through-space-like-a-Stargate-wormhole-knife is slightly more convenient . . . but only slightly. *shrugs*

And then there’s John. John is also an MC, but he’s a bit separate from Quin and Shinobu, b/c his main goal is vengeance. So focused is he on restoring his family to its former glory, and avenging his ancestors, including, but not limited to his mother (whom he watched die at the hands of a rival Seeker when he was child) that he justifies the basest of tactics to achieve his goal.

So the best bet of a sympathetic character becomes as disgusting and pathetic as all the others.

Overall, I had too many objections to enjoy Seeker. The writing was mediocre at best, the mashup of genres made the individual elements less compelling, and the MCs behaved abominably, either b/c they didn’t have the strength of character to disobey a clearly treacherous leader, or b/c they’re so fixated on retribution that they willfully become that which they hate. Not recommended.