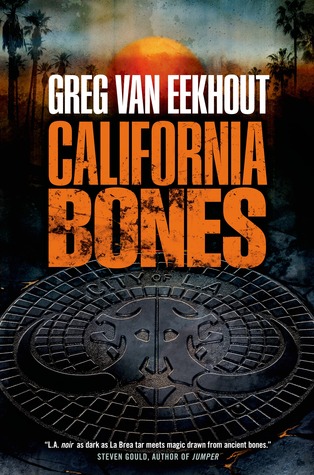 When Daniel Blackland was six, he ingested his first bone fragment, a bit of kraken spine plucked out of the sand during a visit with his demanding, brilliant, and powerful magician father, Sebastian.

When Daniel was twelve, he watched Sebastian die at the hands of the Hierarch of Southern California, devoured for the heightened magic layered deep within his bones.

Now, years later, Daniel is a petty thief with a forged identity. Hiding amid the crowds in Los Angeles—the capital of the Kingdom of Southern California—Daniel is trying to go straight. But his crime-boss uncle has a heist he wants Daniel to perform: break into the Hierarch's storehouse of magical artifacts and retrieve Sebastian's sword, an object of untold power.

For this dangerous mission, Daniel will need a team he can rely on, so he brings in his closest friends from his years in the criminal world. There's Moth, who can take a bullet and heal in mere minutes. Jo Alverado, illusionist. The multitalented Cassandra, Daniel’s ex. And, new to them all, the enigmatic, knowledgeable Emma, with her British accent and her own grudge against the powers-that-be. The stakes are high, and the stage is set for a showdown that might just break the magic that protects a long-corrupt regime.

Extravagant and yet moving, Greg van Eekhout's California Bones is an epic adventure set in a city of canals and secrets and casual brutality--different from the world we know, yet familiar and true.

I don’t like to endorse stereotypes, but Urban Fantasy written by male authors is almost universally darker and grittier than UF written by females. Obviously, within that much larger pool there are nonconformists: Stacia Kane, Jane Wells, even Kelley Armstrong sometimes, but on the other side . . . I can’t think of one. You’ve got Simon R. Green’s UF noir, Richard Kadrey’s severed heads kept in the closet for information, and even Jim Butcher, whose Harry Dresden series is decidedly lighter in tone, explodes bodies b/c “GORE. Yes!”

And California Bones is no exception.

Daniel Blackland lives in an alternate history version of California where magic is real, and the more magic you have, the more powerful you are. The most powerful of all is the Hierarch, who rules Southern California (split from Northern California in a nebulous war) with an iron fist, and cannibalizes anyone he views as a threat.

B/c the Hierarch is an osteomancer, which means that he gets his power from consuming the bones of magical creatures, and yes, humans are under the same umbrella as hydras, griffins, krackens, etc.

And that’s . . . well, that’s beyond the boundaries of my typical comfort zone.

BUT. As gruesome as this world is, it’s also strangely compelling in many ways, not the least of them being Van Eekhout’s insightful writing, like how he captures the first fracture of childhood innocence:

“Do you trust me?”
. . . Daniel loved him with the uncomplicated desperation with which small boys love their fathers. But trust? It had never occurred to Daniel not to trust him. It was like earth. Daniel never wondered if it’d be there when he took a step. Now, the smallest fissures opened in his unquestioning certainty.

PLUS this is a heist novel. I love heists. Ocean’s Eleven (Twelve, and Thirteen) are some of the most frequently watched movies at my house, and Inside Man<-----friggin' awesome. Know what else I love? Tacos.

Cassandra unpacked the pieces of her rifle and screwed the barrel into the action.
“One hell of a circus shot,” Jo said skeptically.
“Well, Cassie’s one hell of a clown,” Daniel returned.
“Bet you a taco she doesn’t make it.”
“Bet you two tacos she does.”

MY KIND OF BET.

So Urban Fantasy + heist + tacos = ALL THE GOOD THINGS.

The characters were pretty great too. Blackland’s crew are not just his colleagues, they’re his family. Moth, a giant of a man who can’t be killed (b/c unforeseen side-effect of I’m-not-telling-you-what-but-there’s-a-legit-reason-I-promise) is probably my favorite, but Cassandra the sniper/lock pick is pretty badass too.

The only real objection I had was how their loyalty to Blackland was repeatedly mentioned. The third time it happened, I went back and started highlighting, b/c OTT, but not too much later, the reason for the overkill was revealed, and while I still felt it had been a bit heavy-handed, I wasn’t straight up annoyed anymore. I don’t know, maybe Van Eekhout tried a different approach in the first draft, but the Reason didn’t make the impact he wanted b/c too subtle. Who knows? Not me. Whatever, the point is that my only specific issue turned out to be half the issue I thought it was.

I’m sure you’ve all heard some variation of the “California will break off from the rest of the States b/c earthquakes” speculation. I have no idea what the legitimacy of that claim is—it sounds ridiculous, but I suppose stranger things have happened. Anyway, for a long time I thought that’s what had happened in this version of California, b/c there aren’t roads, there are canals. And it was strange, people taking one of half a dozen different types of boats that were still referred to as “taxis” and “vans” but were . . . boats. But eventually, it does get explained, and remember that the alternative to the Slow Reveal is the Info Dump, and I infinitely prefer the former.

Overall, California Bones was even better than I’d hoped. I added quite a few beasties to my cryptozoology repertoire, was creepily fascinated by Van Eekhout’s variation of history that, amongst other things, cast Disney (yes, that Disney) as . . . maybe not a villain, but definitely a scary dude, and was gratified by writing of surprising depth on more than one occasion. I’m already halfway through the next book. Highly recommended.