Happy Monday! One of my favourite Werewolf Paranormal Romance authors is stopping by the blog today to share an excerpt from her upcoming release, HUNTER REBORN, and give away 24 print copies of the book. And, if you need a bit more arm twisting to convince you, I’m sharing my 4.5 star review too. Take it away Katie Reus!

Are you planning on talking to me again anytime this century? Aiden asked, his frustration at Larissa’s silence building inside him each second that ticked by. It had been a little under two hours that she’d been giving him the cold shoulder and he was sick of it.
Larissa didn’t look at him, just kept her jaw clenched tightly as they strode down the sidewalk toward the hotel where she’d been staying with Magda. Now is not the time for a discussion of your idiocy.
He growled at her frosty tone and spared a glance behind him. Brianna and Angelo were about twenty yards back, keeping a decent distance between them in case there were any more surprise vamp attacks. They were going to be the lookouts while he and Larissa infiltrated the hotel, then they planned to bring Angelo in to check the scent too. Now more than ever they needed backup.
Connor had contacted both him and Angelo about a vamp breach at the ranch. Aiden was just thankful that no blood had been shed and that the breach had nothing to do with Larissa. His very frustrating mate. My idiocy? What the hell are you talking about? he demanded as they reached the first set of the spinning glass doors of the hotel’s multiple front entrances.
She looked at him and raised one dark, perfectly arched eyebrow. “Perhaps you’d like to show me how to use this fancy contraption?” she purred, her voice dripping with ice as she motioned to the entry.
These types of entrances had been around when she was alive. She was obviously trying to piss him off. “I was just trying to help earlier.” He couldn’t understand why she was so mad. It was like he’d accidentally flipped some imaginary switch and he couldn’t turn it off. Ever since they’d left the diner she’d refused to speak to him, only answering questions he asked aloud and he was positive she did that only because the others had been in the SUV with them. But if he’d dared talk to her telepathically she’d completely ignored him. And forget about touching her. He’d tried to put his arm around her shoulders once but she’d shrugged his hand away.
“If I need your help, I’ll ask for it. But don’t hold your breath,” she snapped out before turning on her heel and stalking through the door. She moved quickly, not giving him a chance to join her in her section of the spinning door.
Scrubbing a hand over his face, he followed. His inner wolf clawed at him, demanding he make things right between him and Larissa but he didn’t know how. They’d never argued when they’d been together. Not truly and not once after they’d bonded. And he didn’t know why they were now.

Katie Reus is the New York Times and USA Today bestselling author of the Red Stone Security series, the Moon Shifter series and the Deadly Ops series. She fell in love with romance at a young age thanks to books she pilfered from her mom’s stash. Years later she loves reading romance almost as much as she loves writing it. However, she didn’t always know she wanted to be a writer. After changing majors many times, she finally graduated with a degree in psychology. Not long after that she discovered a new love. Writing. She now spends her days writing dark paranormal romance and sexy romantic suspense. 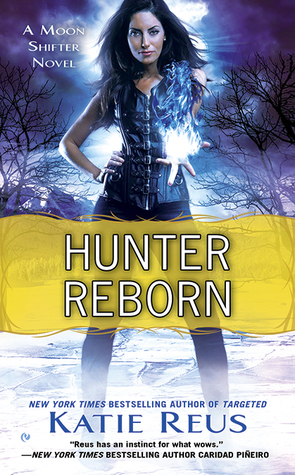 Losing her was the hardest thing he’d ever endured....

Warrior shifter Aiden’s investigation of the trafficking of vampire blood leads to a startling discovery: the beautiful vampire bondmate he thought was dead. Decades ago, they’d defied their powerful families to be together, but then Larissa disappeared without a trace. When their mating link broke, it nearly destroyed Aiden. Now she’s back with no memory of where she’s been. Even more shattering—Larissa claims she has no idea who Aiden is.

It’s a race against time to bring down an operation more evil than his pack ever suspected, and Aiden finds himself working side by side with a mate who no longer trusts him—and she wants out. But he lost her once, and he won’t let her go again. Unfortunately, Larissa’s blood is the key to a powerful monster’s dangerous plan—and he’ll stop at nothing to destroy her, sparking off a war between the supernaturals and humans that no one will win.


I knew from the previous installment that HUNTER REBORN was going to home in on Katie Reus’ vampires, and that was a tad worrisome because I LOVE her werewolves. Well, it turns out that I enjoyed her bloodsuckers almost as much, especially with Larissa at the helm. There were several romances unfolding in conjunction with the central one so that kept things interesting, and the story had some Vlad flair to it which unequivocally equals action as anyone who’s even remotely familiar with the Impaler will affirm.

It’s tough to maintain the same level of world-building after five books, particularly in Paranormal Romance, but somehow this author accomplishes it. I was impressed with her fang mythology, and will be holding out for more in subsequent MOON SHIFTER novels. The lore encompassing the Brethren was clever as was the role that the heroine’s abilities played in crushing the plot’s antagonist. I was happy with the way that Reus incorporated all of this series’ previous main characters while also simultaneously adding new ones.

Originally I thought that this was going to be Ryan and Teresa’s tale because of the introductory chapters, and the fact that I didn’t read the blurb (my bad). I was hoping for more quality time with the werewolf cowboy hacker; however as far as side threads go, it was a good one. I also enjoyed the cute sparks between Lucas & Vivian, the cubs that the pack adopted, as well as Natalie & Aldric’s burgeoning flirtations. It’s hard to pinpoint who’ll be the next couple to get their HEA, but I like the candidates so far.

Second chance romances have been growing on me in recent years, maybe it’s an age thing, either way Reus knows how to sate her readers’ thirst for PNR. Larissa’s been in stasis for sixty years which made her POV quite humorous because on top of having to reconnect with Aiden, she had to decipher twenty first century tech. The compulsory between the sheets romp doesn’t go down until the last chapter, although there was lots of heavy petting along the way, so you’re not left completely high and dry on steam.

75 responses to “Review and Excerpt: Hunter Reborn by Katie Reus”