I’m delighted to be launching Kristen Callihan’s SOULBOUND blog tour today with an excerpt, review, and giveaway. The DARKEST LONDON series is one of my f-a-v-o-u-r-i-t-e Paranormal Romance addictions of all times, so if you haven’t snagged a copy of FIRELIGHT yet, I strongly urge you to do so. Read on to find out why:

Eliza sat back on her heels, while Adam merely stared at her as though he had all the time in the world. “Fine,” she said. “Three weeks. I free you and you help me.” She gave him a warning look. “I’ll need your word that you will help me, that this” she waved her hand between them, “isn’t merely a way to trick me into freeing you.”
“This business was your idea, woman,” he said with affront.
“Nevertheless, I’ll need your word.”
The demon’s nostrils flared with a sharp exhalation. “My word then.” Eliza did not look away from him, and he glared back in obvious exasperation. “What now?”
“I’m merely considering if I ought to trust your word,” she said.
A low growl rumbled in his chest as he bared his teeth. “I keep my word, whether I want to or not. My word is my bond. Honor, Miss May. Unlike you, I have it.”
“How dare you—”
“How dare you?” He craned forward, the muscles along his shoulders bunching. “Not so long ago you broke your promise of fealty. To me!”
“Oh, yes, how quick you are to remind me.” Eliza leaned close, grinding her teeth to keep in a shout. “You enjoy being quick, don’t you?”
His thick, dark brows furrowed. “What in the bloody blazes are you talking about?”
“You gave me all of ten seconds to make a choice.” Eliza’s fists ached from clenching them. “And what a choice. I was dead, my body sliced open, my blood on the ground. I would have done anything, anything,” she thumped her fist to her chest, “to get back my life.”
“So that makes it better?” he snapped back in outrage. “Desperation gives you leave to go back on your word?”
“No. That is not what I meant.”
“Then you agree that you bloody well have no honor—”
“You never explained what was involved. You never said I’d be chained to you, like some animal, for the rest of my days,” Eliza shouted. “I was told I would be a GIM. I was ready to serve you in that manner. You knew full well that’s what I believed. If anything, you swindled me!”
All at once, he sagged, though he still eyed her with resentment and distaste. Well, she had a healthy helping of those feelings for him too.
“Tick, tock, Eliza,” she mimicked. “You rushed me because you didn’t want me to think things over.”
When he broke eye contact, his hard jaw twitched.
“I’m correct, aren’t I?” Ire and a red rage surged up within her. “And you have the brass to sit on your high horse and talk of honor. Well let me tell you something, demon. There is little honor in forcing a person’s hand. Or using your power to coerce those weaker than you.”
A black scowl twisted the demon’s face as he glared at some distant point. “Fine. May I continue, or have you more complaints to heap upon my head?”
“Please do continue,” Eliza granted.
His golden gaze flicked back to her. “I want to kiss you.”
“No.” The word burst out of her with force. “Absolutely not.”
Unfazed, Adam shrugged. “Unless you have something to offer in exchange for your freedom, Mellan and Mab will, as you say, merely hunt us down, and you’ll be back to where you started.”
“Then I shall find out what he wants.” Eliza straightened her back. She could do that. She must. Like hell was she going to kiss this demon.
Adam simply gave her a slow, wicked half-smile. “Fortunately for you, lass, I already know what he wants. What they both want. More than controlling you. More than torturing me, even.”
“Then why in blazes haven’t you used it to secure your own freedom?” Eliza blurted out.
“I’m only alive because they cannot break me into revealing where this item might be.” The belligerence burning in his eyes was gone in a blink, replaced by a look of pure cunning. “However, I might be persuaded to help you use the knowledge. All I require is— ”
“Fine,” she snapped, irritation getting the best of her. “I’ll kiss you.”
Silence fell, and Adam stared at her with those eyes of his. Devil’s eyes. Eyes that made a woman forget herself. Heat rose up over her breasts and crawled along the back of her neck. Eliza grasped her skirts, her fingers twitching. She would kiss him. Kiss a man who had brought her nothing but irritation. Maybe she’d bite him to boot.
His chest, gleaming with sweat, rose and fell in a soft pattern. A bead of perspiration broke free from the top of his shoulder and ran down along the firm rise of his pectoral muscles, straight toward the dark nub of his nipple. All this time arguing with him, she’d forgotten his state of undress. Not so now. She’d have to press up against those hard muscles, touch his skin. Eliza wrenched her gaze back to his face, and his sinful lips curled in a knowing smile.
“You know,” he said casually, “I believe I shall pass for the moment. I’d rather it be when you aren’t wearing such a sour face. Kills a bloke’s ardor, you realize.”
Eliza blinked. And then his meaning hit her. “Why you…rutting…cheap, trickster…”
He laughed, a flash of even teeth. “Come now, Eliza, fret not.” He stopped then, that obnoxious smile growing and heating with promise. “I’ll take that kiss soon enough. ”
She rose to her feet in a rustle of skirts. “And I’ll be sure to bite that wicked tongue when you do!”
She marched out of the cell, slamming it behind her, as he began to laugh again. Bastard. She might just leave him here to rot after all. His laughing taunt echoed through the dark. “Now that I know tongues are involved, I’ll be sure to collect.”

Kristen Callihan is an author because there is nothing else she’d rather be. She is a three-time RITA nominee and winner of two RT Reviewers’ Choice awards. Her novels have garnered starred reviews from Publishers Weekly and Library Journal, as well as being awarded top picks by many reviewers. Her debut book, Firelight, received RT Book Reviews’ Seal of Excellence, was named a best book of the year by Library Journal, best book of Spring 2012 by Publisher’s Weekly, and was named the best romance book of 2012 by ALA RUSA. When she is not writing, she is reading. 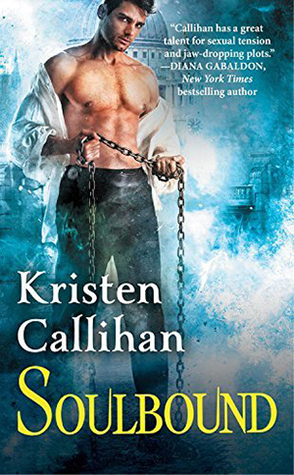 When Adam's soul mate rejected him, there was more at stake than his heart. After seven hundred years of searching, his true match would have ended the curse that keeps his spirit in chains. But beautiful, stubborn Eliza May fled-and now Adam is doomed to an eternity of anguish, his only hope for salvation gone . . .

Their hearts will beat together forever

No matter how devilishly irresistible Adam was, Eliza couldn't stand the thought of relinquishing her freedom forever. So she escaped. But she soon discovers she is being hunted-by someone far more dangerous. The only man who can help is the one man she vowed never to see again. Now Adam's kindness is an unexpected refuge, and Eliza finds that some vows are made to be broken . . .

Kristen Callihan has been 5-for-5 with her DARKEST LONDON series, and I’ve been looking forward to Adam’s story most of all, so when the mailman delivered SOULBOUND the pressure was on. This installment brought with it plenty of new revelations with regards to the Fae, the King of the GIM’s curse, and we finally discover what was plaguing Archer in FIRELIGHT. The writing was as strong as ever, and the author made me weep with her romantic elements, but this book had a degree of predictability to it that the others didn’t which is why Callihan’s perfect rating streak must end here.

This world is peppered with paranormal excellence from the mythology to the plethora of otherworldly characters; however only the Ghosts In The Machine have captured my interest to the point of obsession. Spooks are common enough in this genre, but this author’s approach is exceptional, bar none. Adam’s nature has been one of this series’ most closely guarded secrets, and is so intricately linked to the Fae that an examination of one will spoil the other, and both get cracked wide open in this novel, thus expect a deluge of answers, just not from me. Ha!

As astounding as all of this book’s epiphanies were, they paled in comparison to the atypical conclusion. Callihan didn’t simply choose the path less traveled, she forged her own, and in doing so completely changed the definition of happily-ever-after. A common complaint of mine where ghost romances are concerned is that there aren’t any easy solutions to unite the couple, and the obvious fix is the one that no reader wants to face. I loved the direction that Adam & Eliza’s story took, although it was partially to blame for this installment’s foreseeable chain of events.

Two of DARKEST LONDON’s previously featured heroines are GIM, so a coup on their King meant that this novel’s plot arc was widespread which had its benefits because the better part of this series’ characters got a word or two in. The mystery behind book 1 was solved at long last, and will in all probability carry over to the next title if Sin has anything to do with it, although I wouldn’t mind terribly if Lucien’s tale took precedence, especially after his recent admission. I guess the point I’m trying to make is that wherever this author goes from here, I will follow.

SOULBOUND will make you believe in the impossible, there is love after death.

64 responses to “Review and Excerpt: Soulbound by Kristen Callihan”