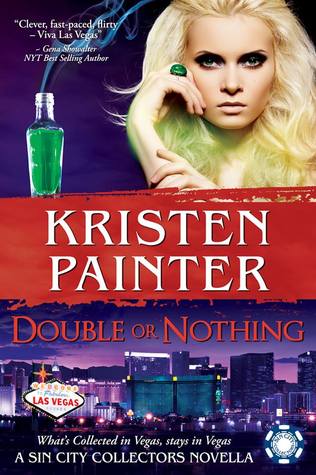 Welcome to Las Vegas, home of the Sin City Collectors. The job description is easy: Bring the offending supernatural in to the Boss and don’t ask any questions.

Gage Hudson is a vampire on a mission. All he wants—all he's ever wanted—is to locate the vampire who killed his brother and exact his revenge. Even if that means losing his job as a Gotham City Collector. And he knows what loss feels like, because his desire for revenge has already cost him the love of his life.

Sin City Collector and pixie Minka Winslow has revenge fantasies of her own and they all involve Gage. When he walked out on her with no explanation, she took the heat for the Collection he ruined. Fortunately for him, she’s put that part of her life behind her.

At least until the two are forced to work together to stay alive. When an enemy from their past returns to threaten them, they have no choice but to reconcile long enough to survive. Then new information changes everything. Just how much will they gamble to make things work this time?

Double or Nothing is another story in the Sin City Collectors Novella series. Each book in this series can be read as a stand alone, but characters do sometimes appear in different books. So far, there have been two authors who have contributed to this series, Kristen Painter and Amanda Carlson. I’ve read urban fantasy series from both authors before starting this collection. These stories, while shorter than a full length book, are still fully developed. All the characters are exciting and the world is well done. The plots are intriguing. The romance is a little fast paced, but that is to be expected with a novella.

In this Double or Nothing, we have Gage, a vampire who has worked for the Gotham City Collectors out of New York. He is trying to find the vampire who murdered his brother, which is the reason he became a collector in the first place.

Minka is a pixie. The only books that I’ve read with pixies, pixies were only inches tall. Minka is short, but not that short. She is five foot, four inches tall, so short, but not hold in the palm of your hand short. Also, don’t think her size makes her a weakling, she isn’t. She can hold her own. Also, her pixie dust can force people to tell the truth, that’s a nice trick to have.

These two have a past, and not a good one. They were together a few years before, but Gage up and left town without explanation. He had gotten a tip about where his brother’s body might be and he had to take it. He needed his revenge and that was more important to him than anything. This was hard on both of them. These two have to work together if they are going to find the vampire that took Gage’s brother.

These novellas have all been fast paced and a lot of fun. My biggest complaint continues to be that I wish that they will full length books. Not that they don’t have a full story, but because I love the characters so much, I just want more time with them. I also love how we see many species of paranormal characters in this series that you don’t see as much in paranormal romance or urban fantasy. In this book, there is the pixie. In previous books, we’ve seen gargoyles, hellhounds, shifter mixes and damphirs. I don’t know if any more books are planned or if more authors are planning to contribute stories, but I would love to see more.

Since each of these books stand alone, you don’t feel like you need to read any of them in any particular order. While you will see characters from previous books in later books, they are cameo appearances, so you won’t miss anything without having read their books previously. I recommend looking to see which story catches your fancy and starting there. I have one book left that has been published that I still need to read and it is actually before this one. I was gifted this one, so I read it first.

26 responses to “Review: Double or Nothing by Kristen Painter”