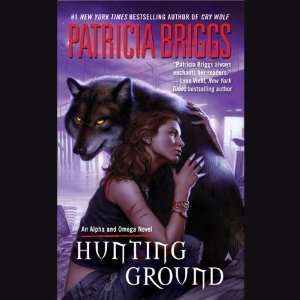 Mated to werewolf Charles Cornick, the son—and enforcer—of the leader of the North American werewolves, Anna Latham now knows how dangerous being a werewolf is, especially when a werewolf who opposes Charles and his father is struck down. Charles’s reputation makes him the prime suspect, and the penalty for the crime is execution. Now Anna and Charles must combine their talents to hunt down the real killer—or Charles will take the fall.

HUNTING GROUND had a lot of interesting morsels in it from both a mythology and a story standpoint; readers get to learn about fae, vampires and dragons (!!!), witness firsthand how Bran’s decision to bring the werewolves out to the public came to be, and observe the continuing evolution of Anna & Charles’ relationship. No author does light/dark quite like Patricia Briggs, and this audiobook really emblazoned that fact by putting these preternaturals’ best and worst qualities on display. Holter Graham’s narration continues to leave me in thrall, and the murder mystery plot line made hours of listening time feel like mere minutes. Now I understand why this series trumps MERCY THOMPSON for many.

I enjoyed being a fly on the wall at the werewolf conference; pack dynamics have always fascinated me, and the political aspects that Briggs brought to the fore were so well executed that it was impossible not to get caught-up in the discussions. This novel really showcased the best and worst of shifter society from The Beast who likes to feast on human flesh, to Arthur who obviously wasn’t playing with a full deck of cards, to Anna who’s slowly coming back from the dead. I hadn’t expected to meet another Omega already what with them being extremely rare and all, but it seems like Ric was as clueless about his nature as Latham, so it was amusing watching them attempt to fill-in the blanks together.

In spite of all of the mad goings-on in this tale, Anna & Charles still remain the driving force behind this series. I love how flawed their characters are, and how they continually adapt to each other in an effort to strengthen their mate bond. The open communication that exists between them is a breath of fresh air when compared to other couples in this genre where relationship drama has become the norm. I liked how the author added a historical element to HUNTING GROUND by putting her own werewolf spin on King Arthur, although I do wish that Latham hadn’t been coveted by yet another certifiable shifter so soon after leaving her first pack. Her kill count is staggeringly high after only two installments.

Holter Graham’s narration made an impression on me in CRY WOLF, and in this audio he went above and beyond his original performance. He demonstrated great flexibility and flair by bringing the foreign wolves to life with various accents while still staying true to the original voices of Anna & Charles, although the latter was admittedly somewhat modified. His delivery was both emotionally poignant and intense which were contributing factors to this story’s believably and further increased the purity of the characters. Graham’s inflections made the changes in POVs obvious, and I can’t wait to see what he does with FAIR GAME.

HUNTING GROUND should be on every audiobook listener’s playlist.