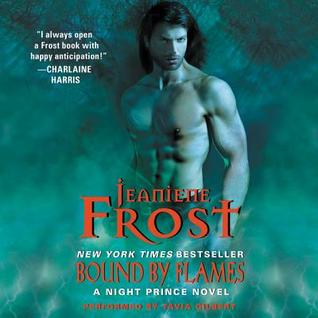 Play with fire, pay the price

Leila's years on the carnie circuit were certainly an education. What she didn't learn: how to be a vampire, or how to be married to the most famous vampire of them all. Adjusting to both has Leila teetering on a knife edge between passion and peril, and now the real danger is about to begin . . .

Vlad must battle with a centuries-old enemy whose reach stretches across continents and whose strength equals his own. It isn't like Vlad to feel fear, but he does . . . for Leila, because his enemy knows she is Vlad's greatest weakness. As friend and foe alike align against him—and his overprotectiveness drives Leila away—Vlad's love for his new bride could be the very thing that dooms them both . . .

Jeaniene Frost is renowned the world over for her oh-my-god-is-it-hot-in-here scenes, but she can also rock the dark like nobody’s business, and readers were reminded of that fact with a vengeance in BOUND BY FLAMES. Graphic torture anyone? I’m talking flaying, limb amputation, silver poisoning, starvation, and pseudo rape. This installment was originally intended to be the finale of the NIGHT PRINCE series; however after listening to book 3, I can understand why the author decided to axe that plan. A new super villain has risen, Vlad & Leila didn’t get their HEA, and there’s still plenty of story left to tell!

I’ve had a jumbo crush on Tepesh ever since his character debuted as a secondary in Frost’s NIGHT HUNTRESS novels, and it’s steadily grown into an all out obsession with this spin-off series. He could easily be king of the bad guys if it weren’t for Mrs. Dracula which makes him the ultimate antihero. We got to see a more vulnerable side to Vlad in this installment while as Leila was all steel and resolve. The balance of power in their relationship has been markedly one-sided until now, so I loved the role reversal, and as expected, the author didn’t hold back on the ravishing either. *winks*

Maximus drove me nutso in the best kind of way, and I was happy that Leila’s father finally saw reason after his prolonged silent treatment of his daughter. Marty was as primo as always, and my hankering for a Cat & Bones cameo was quenched, although it’s worth pointing out that their part was somewhat spoiler-y if you haven’t read UP FROM THE GRAVE yet. Mencheres also popped in to say hi which made my character driven self very jubilant. You’ll notice that I’m glossing over the plot, and that’s because it puts to bed the main story arc, so I’m not willing to risk accidentally spilling the beans, but it’s DA BOMB!

This was my first time listening to a NIGHT PRINCE audiobook, however I was already acquainted with Tavia Gilbert as a narrator, so I had zero quibbles about her performance going in. Her renditions of both of the protagonists were on par with those that I had inside my head prior to her voice taking them over. I’m a sucker for accents, and her English (Bones), Romanian (Vlad), and New Orleans (Marie) vernacular left me tickled pink. I’m still trying to determine whether it was the narration or the writing that has me dubbing this as my favourite installment, either way, I loved it!

BOUND BY FLAMES will make you break out into a Snoopy happy dance!

84 responses to “Audiobook Review: Bound by Flames by Jeaniene Frost”