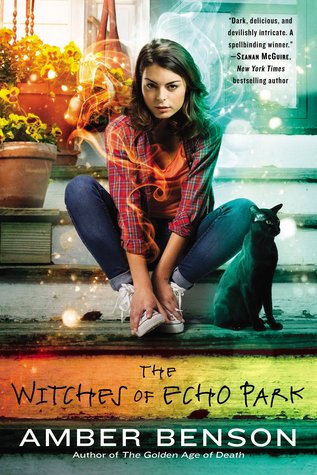 Unbeknownst to most of humankind, a powerful network of witches thrives within the shadows of society, using their magic to keep the world in balance. But they are being eliminated—and we will all pay if their power falls…

When Elyse MacAllister’s great-aunt Eleanora, the woman who raised her, becomes deathly ill, Lyse puts her comfortable life in Georgia on hold to rush back to Los Angeles. And once she returns to Echo Park, Lyse discovers her great-aunt has been keeping secrets—extraordinary secrets—from her.

Not only is Lyse heir to Eleanora’s Victorian estate; she is also expected to take her great-aunt’s place in the Echo Park coven of witches. But to accept her destiny means to place herself in deadly peril—for the world of magic is under siege, and the battle the witches now fight may be their last…

I don’t know how I have managed to not read anything by this author until now. I do know that I fully intend on continuing reading this new series after reading this book. For me, it was a different sort of read, usually a good thing!

Witches exist, and are alive, and maybe not all exactly well, in the Echo Park area of LA. Eleanora is the leader of the Echo Park Coven, and has called her grand-niece, Lyse, to inform her of her impending death. Eleanora and Lyse are each other’s only family, so Lyse is devastated and immediately flies to LA from her home in Georgia. Once there she gets initiated into the coven, something she never knew anything about before now. Although Eleanora’s diagnosis is bad, she still is able to get around, and hopes to take this time to train Lyse as a witch. But there is something wicked that is happening behind the scenes, and the action ramps up when mysterious men start arriving in the area.

To me, there are two main characters of this book-both Eleanora and Lyse. A good portion of the book is the back story of Eleanora, and I found it to be more compelling then Lyse’s now story. That doesn’t mean that Lyse was boring or anything. She is capable as a half owner of a plant nursery(earth magic), educated, and closing in on thirty. She also spends a good part of the book thinking her aunt is delusional due to her illness-and she couldn’t be more wrong. Eleanora is a very outspoken, strong willed, and a very talented witch. She has hid this part of her life from Lyse, ever since Lyse began living with her as a young teenager. So it’s no wonder Lyse is completely confused about all that is happening. The other members of the coven were so fully realized by the author that each member has characteristics that stand out for the reader. Sometimes I have problems keeping characters straight in my head, when a group is involved, not so here. Of course there is also a love interest named Weir, but he wasn’t as important to the story as the coven-yet.

I did have some problems with this book. It’s an adult book but the author utilizes insta-love, and I found that to be a bit unbelievable. The ending, while not a cliffhanger, left a major plot point that was mentioned several times unexplained, and that bothered me. I know it’s the beginning of a series, but I was left with a bit of an unfulfilled feeling at the end because of this. And lastly, I am still on the fence about Lyse as a character. I liked her, but sometimes she was just a bit too quirky in her actions for my taste. The author’s realistic view of a women who finds out she is not what she always thought she was her whole life? That’s just one of the things I want to find out in the next book.

And yes I fully intend to read the next book. Why? Because I was pretty fascinated with the whole story. Sure it had problems, lots of first books in a series do at some point. None of the problems were enough to make me not want to read the next one. I want to find out about the plot point that didn’t get explained. I want to see where the insta-love goes because it does show promise and I did really like Weir’s character. But most of all, I want to read more about these witches, their lives, and the ghosts they are surrounded by. And yes there are ghosts in this story.

49 responses to “Review: The Witches of Echo Park by Amber Benson”