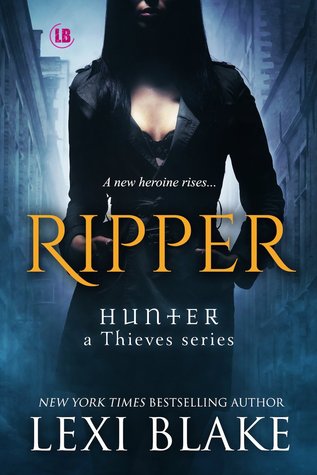 Kelsey Atwood is a private detective with a problem. She came from a family of hunters, growing up on the wrong side of the supernatural world. Tracking down bail jumpers and deadbeat dads may not make her a lot of friends, but it’s a lot safer than the life she turned her back on. She was hoping to escape from the nightmares of her past, but her latest case has brought them right back to her door.

A young woman has gone missing, and she didn’t go willingly. When Kelsey discovers that the girl is actually a shifter, she knows she should drop the case and walk away. But this shifter was a sweet kid, and she’s in serious trouble. More females are missing and the evidence points to a legendary killer. Bodies are piling up, and her case is becoming center stage for a conflict that could shatter the fragile peace between wolves and vampires.

As the hunt intensifies, she finds herself trapped between two men—Gray, a magnetic half-demon lawman, and the ancient vampire Marcus Vorenus. Both men call to her, but when a shocking secret about Kelsey’s family is revealed, it could ruin them all. To stop the killer, she will have to embrace the truth about who—and what—she truly is.

Contradictions. I wrestled with how I wanted to review this, but the word contradictions kept running through my mind, not only after I was finished, but all the way through the read. I liked it, I loved it, and at times I truly didn’t care for it. Ultimately, that means at times I was wondering where the story was going, because I wasn’t totally invested, and at other times, I couldn’t put it down.

Kelsey is a private investigator who, although she is very aware of the supernatural world, has stayed as far away from it as she can for years. She does have her reasons. She has one friend in this world, Liv, a witch. When Liv gets Kelsey involved in a missing girl case, she gets yanked back into the world she never wanted to be part of.

Throughout the first half of the book, I really enjoyed myself. I thought Kelsey was a really different sort of character, really liked Liv due to her warmhearted caring attitude towards Kelsey, and even liked Kelsey’s, at times, overbearing brothers. When Kelsey starts falling for her brother’s friend, Gray, I had problems with how fast, a closed off character that Kelsey ultimately is, falls in love, and it just didn’t ring true with me. And when the first sex scene began, that’s when I really didn’t like the book. I have nothing against a good sex scene, but I am just not into the whole tying someone up(and don’t get me started on the use of the p word for a part of the female anatomy!). Had I known, I would never have picked up this book. I know a lot of people don’t mind this, and that’s perfectly fine. Just my personal preference. Gray is a half demon, and I just really didn’t like him that much. Now to the character that I loved. Marcus is the oldest living vampire in the world, and he’s a supernatural counsel member. When Kelsey meets him, he’s pretty bored with his life, but perks up considerably when he realizes what Kelsey is, and actually becomes enamored with her.

Okay so what is Kelsey? I am so not telling. That’s the fun part of this book, and became the part of the book that I loved. In fact the whole last maybe thirty five percent of the book, I was on the edge of my seat with all the suspense and action involved-due in large part to what Kelsey is. So yes, the last part of the book was the part I loved. It also is the reason I will be reading the next book, because I am so intrigued with Kelsey, and with Marcus as well.

Early on, you realize that many of the supernatural characters that Kelsey comes into contact with in her investigation, have been in a book series of their own. This was my first book by this author, but I don’t think I was lost by not knowing any of these characters back story. I am sure the author’s fans of that series will gobble this book up. I think readers that like supernatural characters of all types, or that like books featuring gory murders(involving shifters), will enjoy this read as well. Maybe I should mention that it’s not a feel good read, although Kelsey does have a lot of snark, which I always enjoy in a main character, and certainly added some much needed levity to the read.

If it seems like this review is all over the place, that might be because I was all over the place while reading it. I do think that a lot of people will enjoy this read, and if bondage doesn’t bother you, then I do recommend it.