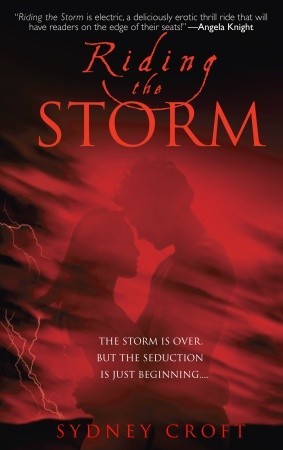 A storm’s rage. A woman’s desire.

A man with the power to set them both free.

He can summon lightning at will. Emerge unscathed from the center of a tornado. Strip a woman down to her barest defenses through the sheer force of his sexuality. He’s gorgeous, dangerous, and the target of parameteorologist Haley Holmes’s latest mission. Haley has been dispatched to the Louisiana bayous to investigate the phenomenon known as Remy Begnaud–a man with a gift he never wanted: the ability to control a storm’s fury. But even a woman trained in bizarre weather phenomena has no defense against the electrifying power of the ex—Navy SEAL...a power his enemies would kill to control.

I started this series because I saw a more recent release from this series on That’s What I’m Talking About.  When I saw that Larissa Ione (who I love) was half of Sydney Croft, I decided that this needed to be on my list ASAP.  Reading the post on Jen’s site, but not for the first book, I really didn’t know what I was getting into.  Needless to say, I was a little shocked when I got just a few pages into the book, it was much more X-rated than I’m used to for PNR.

Remy was adopted as a child.  He doesn’t know anything about his birth parents other than he was born in the middle of a hurricane and left in a small town in the bayou.  He is fresh out of the Navy SEALs. He affects the weather, but has pretty much no control over this power.  Haley was raised by two parents who were basically hippies.  They didn’t even give her a name until she picked one at the age of four.  Haley is a parameteorologist, which is why she is chosen to bring him in.

This story is X-rated, X-Men crossed with X-Ops. (Notice the triple X, that wasn’t an accident.) You have two groups of supernaturals (think of Xavier’s and Magneto’s different teams).  They send in Haley to “recruit” Remy.  I put recruit in quotes, because he was to be brought in by any means necessary to keep him away from the bad guys.  Remy is even taught how to seduce her way in because Remy cannot control his sexual urges during storms. Problem is that the bad guys really want him too.  I mean, who doesn’t want the ability to control the weather?

There is also a side story between Creed and Annika, two other operatives for ARCO as they investigate a haunted house with an angry ghost.  Creed is a ghost hunter and Annika has some unique abilities with electricity.  Then there is Devlin, who is the blind leader of the group.  He has sex with multiple different people, including another man, which I wasn’t expecting in this book.

I was a little surprised by this book.  It is a paranormal romance by definition, but more like paranormal erotica.  The sex starts in Chapter Two and keeps going.  Sex is the main plot of the story until about 50% when the bad guys make their appearance.  Then the action picks up.  While I don’t mind sex in my books, I read erotica stories all the time, this book was a little too much for the first half of the book.  Once the action started, I really enjoyed the story much more.

I did enjoy this book, but I really hope that the next book has less sex in it (I never thought I would say that).  The writing was great and the characters were magnificent.  I want to know more about all of them and get more details about their each of their powers.  I can’t believe I’m saying this, but I hope that there is less sex.  I love good sex scenes, and these are great, but I like action too.  I think part of it was that the story took me by surprise.  I wasn’t expecting a PNR erotica story, which is what it was.

This book has some great supernatural characters with some really unique powers.  The characters are very well developed.  The world has been well established and I think the stories will only get better now that the world has been built.  I love the military/police force investigations that seem to be a part of the story. I’m itching to get to the next book.

43 responses to “Review: Riding the Storm by Sydney Croft”