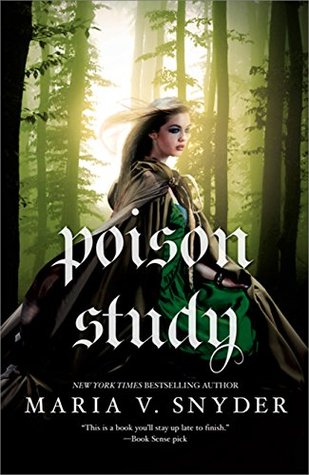 About to be executed for murder, Yelena is offered an extraordinary reprieve. She'll eat the best meals, have rooms in the palace—and risk assassination by anyone trying to kill the Commander of Ixia.

And so Yelena chooses to become a food taster. But the chief of security, leaving nothing to chance, deliberately feeds her Butterfly's Dust—and only by appearing for her daily antidote will she delay an agonizing death from the poison.

As Yelena tries to escape her new dilemma, disasters keep mounting. Rebels plot to seize Ixia and Yelena develops magical powers she can't control. Her life is threatened again and choices must be made. But this time the outcomes aren't so clear...

I’ve been wanting to reread this series for like two years. No lie.

It’s been 6 or 8 years since the last time I read it, and I remembered really liking it, but not much else. But guess what? NEW BOOK! So yeah, just prior to the release of Shadow Study seemed like an excellent time to get my reread on, and guys . . . it was even better than I remembered it.

That. Has. NEVER. Happened.

Yelena, a self-confessed murderer is spared from hanging when the Commander of the military governed nation she lives in needs a new food taster. The last one died of . . . poisoning. Go figure.

Valek, the head of the Commander’s security offers her the position, and when she accepts Yelena discovers that he will also be responsible for her training, BUT . . . his training methods can best be described as . . . trial by fire. I believe he says something like, “if you can survive this, nothing else will accidentally kill you, and you won’t be a waste of my valuable time and effort,” just before dosing her with the moste potente poison (<-----HA! HP reference!) he has available. Nice guy, that Valek . . . But Yelena is both stronger and smarter than she appears, and she not only survives the poisoning, but thrives under Valek's tutelage. And if that was all there was, well . . . that would be boring. But that's not all. Yelena has secrets. Like the reason why she killed the only son of her benefactor, one of the eight Generals directly under the Commander in rank. A General who is distinctly unhappy about her avoiding the noose. Yelena is also unsurprisingly world-weary. BUT. Despite her best efforts, she's unable to snuff out the fragile flame of hope that burns inside of her. Hope for a better life. Hope for someone to trust. Hope for something as simple, yet, previously, as unattainable as a friend. In Poison Study, you grow with Yelena as she grows, begin to trust as she trusts, feel the bitter disappointment of betrayal when she is betrayed, and barely dare to allow yourself to hope as something more than friendship begins to blossom.

She picks up a few allies along the way as well, and a pair of soldiers in particular, Janco and Ari, are simply fantastic. Ari adopts the role of protective older brother, while Janco fills the prankster brother position exceptionally well, and you feel that in your gut too, b/c Yelena is an orphan.

And all of this is happening within the unfolding mystery that’s detailed quite nicely in the blurb, so I won’t rehash it.

On the surface, Poison Study probably looks a lot like every other YA fantasy out there, and it admittedly doesn’t stray far from the standard and acceptable elements. But Snyder has created a world with characters who make you FEEL what they FEEL, who you want to triumph, and fear for when failure seems imminent. I’ve never denied being a character-driven reader, and Poison Study is a marvelous example of the kind of book that really, really makes me happy. Highly recommended.