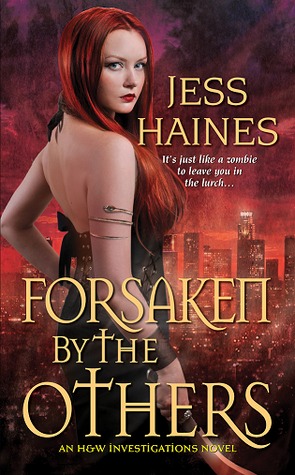 The Others--vampires, werewolves, things that go chomp in the night--don't just live in nightmares anymore. They've joined with the mortal world. And for private investigator Shiarra Waynest, that means mayhem. . .
Have a one night stand with a vampire, and you can end up paying for it for eternity. P.I. Shiarra Waynest, an expert on the Others, knows that better than most. Yet here she is, waking up beside charismatic vamp Alec Royce with an aching head. . .and neck. Luckily, Shia has the perfect excuse for getting out of town--namely, a couple of irate East Coast werewolf packs who'd like to turn her into a chew toy.

On Royce's suggestion, Shia temporarily relocates to Los Angeles. But something is rotten--literally--in the state of California, where local vampires are being attacked by zombies. Who could be powerful enough to control them--and reckless enough to target the immortal? Following the trail will lead Shia to a terrifying truth, and to an ancient enemy with a personal grudge. . .

It’s an unspoken rule that every series has to have one blah installment, and unfortunately for H&W INVESTIGATIONS, this was it. Jess Haines’ engrossing writing style was still present, but FORSAKEN BY THE OTHERS was minus the tall glass of action that I’ve become accustomed to, the love interest was mostly a no show, and Shia’s ultra-cool mofo rep took a lickin’ which all lead to this book’s stepping stone like quality. The cliffhanger ending only served to further reinforce that sentiment as well, so all in all I’d have to say that this was my least favourite Waynest novel.

I was happy with how this story started; progress was being made on the Alec front, Shiarra was reunited with her business partner, and then… the girls get shipped off to L.A. Goodbye secondary characters, adios main plot arc, and arrivederci smexy times. Don’t get me wrong, I still enjoyed meeting Gavin, Clyde, Jimmy & Fabian, and hooking up with Tiny & Devon again was an unexpected treat; however I couldn’t get over the feeling that something was missing. I was also a little cheesed that the author mentioned Jack’s new status only to leave readers in the lurch—if I had balls, they’d be blue.

Shia’s been making some good headway as this series’ heroine, and granted the occasional setback is to be expected, but this book felt like a return to HUNTED BY THE OTHERS. The majority of this protagonist’s strengths lie with her aptitude as a P.I. and a couple of magical artefacts. The former continued to hold steady, however without the latter Waynest was pretty much a sitting duck which made her willingness to immerse herself in L.A.’s Other community, without allies I might add, to solve a case involving zombies come across as a death wish. I was disappointed by her utter lack of self-preservation.

The plot was sufficiently twisty enough to keep me engaged, and with a suspect list comprising of three shady vampires, one über powerful necromancer, and a rabid Goliath werewolf, there was plenty of whodunnit goodness to go around. I enjoyed watching Shia and Sara team up on an investigation for a change, although there were a couple of facets that were entirely too opportune in my opinion such as Halloway’s predicament, and the “ancient enemy with a personal grudge”. The blurb was a bit spoiler-y for anyone who’s read the earlier installments which if you’re tackling book 5, I’m assuming you have.

FORSAKEN BY THE OTHERS was a means to an end, a set-up for the next novel.

38 responses to “Review: Forsaken by the Others by Jess Haines”