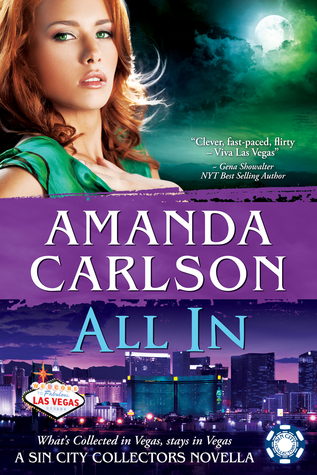 Welcome to Vegas. Home of the Sin City Collectors. The job description is easy: Bring the offending supernatural in to the Boss and don’t ask any questions.

Ginger Elliot is a succubus on the run. She’s in danger of being Collected, but her first priority is to find her brother. Even though she operates the biggest spy network in the supernatural world, it may not be enough to free her from the crimes she’s been accused of committing. It doesn’t help that she hasn’t fed in months, and keeping her deteriorating condition from the sexy shifter who’s accompanying her is getting trickier by the hour.

Luke Jones is on a mission to save the succubus he’s fallen for—not only from her brother—but from herself. The two have been on the incubus’s trail for weeks and finally have him backed into a corner. Luke knows the succubus is in trouble, but he has no idea how to help her. In the end, letting go of his painful past is the only way he can save her.

*All Sin City Collectors Novellas are stand alone paranormal romance novellas, each with their own set of characters and happy endings, and are all set within the world of the SCC. Our goal is for you to sit back and enjoy the ride as each author presents their unique story. Places and characters will overlap, so be sure to look for your favorites and stay tuned for more novellas!

The Sin City Collectors is a interesting series of novellas by a several different authors. Each story can be read as a stand alone paranormal romance story. They are set usually in Las Vegas, hence the the Sin City name. The books do not have to be read in order, but characters from previous books to make appearance in future books, but they are as supporting characters, so it is more like a cameo.

The collectors are a group of paranormal bounty hunters. They are given a mark, a paranormal creature that has done something bad, and must be brought in for trail and sentencing. Throughout the series, we have seen creatures from Hellhounds, vampires, werewolves, witches, and even a gargoyle. This story focuses on a werewolf and a succubus, female sex demon.

Luke is a werewolf who has a history with sex demons, one killed his father. He has an intense hatred of them. However, he is trying to help Ginger to find her brother who has been inducted into a incubus cult. Their father really hated his own kind and took that hatred out on his kids. Their mom pretty much didn’t do much parenting, so their upbringing was not a fun time.

While I’ve really enjoyed this series, this book wasn’t as good as some of the other books. Ginger’s own hatred of her kind, that she doesn’t even realize she has, makes me not like her. Luke is a great guy, who despite his past run ins with sex demons, really is willing to do whatever is necessary to help Ginger.

This is a novella, so it is quick read, but the characters are very well developed. The romance is face-paced, but that is expected with a novella. So far, my biggest complaint about the books is that I love the characters so much, I wish the books were longer so that I could spend more time with each character. If you are a fan of PNR or UF, and are in the mood for a quick, fun read, then this is great series for you.

38 responses to “Review: All In by Amanda Carlson”