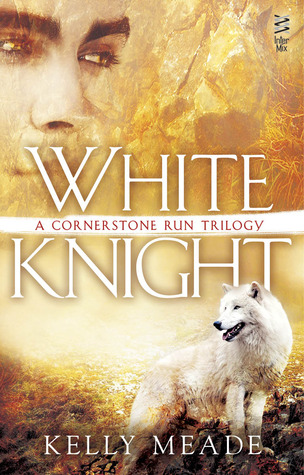 Despite a month of peace from hybrid attacks, the constant threat of violence has the loup garou on edge. Knight McQueen’s home feels like a military compound and his people have become battle-weary soldiers. And Knight’s tenuous grip on his own self-control has been further damaged by the disappearance of the only woman whose touch brings him peace.

Held prisoner by her hybrid half-sisters and forced to care for an unknown child, Shay Butler’s quarterly is approaching but a silver-laced collar prevents her from shifting. As her time draws closer, her sanity begins to slip.

The opportunity to rescue Shay arrives when Magus enemy Archimedes Atwood requests a parley to discuss ways to end the conflict between their people and stop the rogue hybrids. Alpha Bishop McQueen agrees, bringing his brothers together to form a plan that will bring Shay home to Knight, stop the final two hybrids—and finally bring Archimedes to justice once and for all...

Knight’s character has been growing on me throughout this trilogy which is why I’ve been impatiently awaiting this last installment with bated breath. White wolves are this universe’s unicorn, and this final HEA has been quite the arduous battle, thus I expected a glorious conclusion to the McQueen family’s adventure via the middle brother. WHITE KNIGHT was a far cry from being the grim story that I had anticipated; yes there was still darkness and death, however for the most part Knight’s tale was about healing and moving forward. It was an uplifting way to end this series, but the radical about-face made for a somewhat bumpy read.

There’s no disputing it, Bishop and Rook ARE alpha males, while as Knight is more of an emo werewolf which was what made him so unique, but that doesn’t necessarily mean that he’s incapable of getting his claws bloody when the need arises. Or at least, that was my take on it anyway. Regrettably, McQueen’s part in this story was rather humdrum in that he didn’t rescue his lady, barely contributed to offing the antagonist, and instead spent the bulk of his time talking about his feelings. Kudos to him for finally getting the words out; however heartfelt confessions don’t exactly make the pages fly by.

Shay definitely wears the pants in this CORNERSTONE RUN relationship, and this story was just as much hers as her mate’s, although I unquestionably enjoyed her role tenfold in comparison to Knight’s. She showed courage while at the mercy of the hybrids, loyalty to Chelsea & Leopold and unrelenting patience to her beloved. I was also happy to see her own her alpha daughter status by supplying Bishop with tactics to help defeat their enemies, and offering up ideas on how to improve pack life. This book would have been hella boring without her.

Ok, that’s not entirely true, I liked the plot a great deal as well, and Meade wrapped up all of the threads to my satisfaction, even a few that I had completely forgotten about or didn’t realize were linked to the bigger picture. I actually found myself hating the hybrids less and less, and Atwood more and more as the truth surfaced. The Paul Melina aspect was inspired, and the Dell Jones incident was further validation that the author left no stone unturned. This novel would have felt incomplete without an epilogue, so I was immensely grateful that Meade decided to go the distance, and deliver the flash forward that I craved.

WHITE KNIGHT was the light at the end of the CORNERSTONE RUN trilogy.