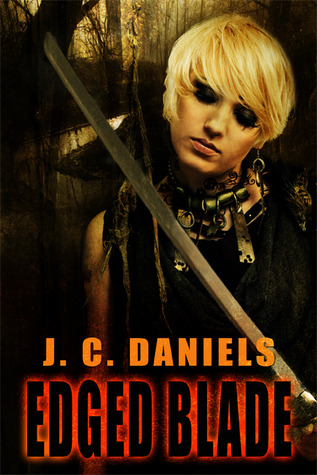 In the year since her life was torn apart, Kit Colbana has slowly rebuilt herself. There’s a promise of hope in the relationship with the alpha of the local shapeshifters and she no longer comes screaming into wakefulness. Life’s not perfect but then again, when was it ever?

When her best friend Justin comes to her for help, there’s little question as to what her answer will be. Witches are disappearing and Justin won’t rest until he has answers. Soon, they learn that it’s not just witches who’ve gone missing, but vampires and shifters, too.

Unlikely alliances are forged as Kit and Justin found themselves drawn into a twisted web of lies and betrayal. As the clock counts down and the culprit behind recent disappearances is revealed, those Kit loves the most become the target of somebody who will kill to protect an ugly secret.

If you are not familiar with this series or author, J.C. Daniels a pen name for Shiloh Walker. Shiloh Walker is an author that I’ve read a bunch of paranormal romance and romantic suspense, so when I heard she was self publishing an urban fantasy series, I jumped on it and loved it from book one.

Kit is a half-breed assassin with an affinity for swords. She is a species that most people know little to nothing about. She was raised by her grandmother who had little use for her and did nothing but tell her what a pathetic waste of space she was. Kit has left the realm where her family lives and now lives in Florida. This world has cat shifters, werewolves, vampires and witches.

If you’ve ever read the Kate Daniels series by Ilona Andrews, I know all of this sounds really familiar. Don’t think that this is a copy of Kate. It is not. Yes, there are similarities. Yes, their name is similar and they both really love their sword. Yes, the male love interest is a cat shifter. But the characters and the world built around them are completely different.

In this story, Kate is finally starting to come back into her own after surviving her capture from a particularly evil vampire. She even goes to a party with Damon, her main squeeze and leader of the cat shifters in Orlando. This party is for the Assembly, a group that oversees all supernaturals, including vampires. This is a big step for Kit to finally spend time around vampires.

Kit is also back to working her PI job, where Justin asks her to help him locate some supernaturals that have disappeared. They even get some help from a vampire who has some interest in the case as well, another huge step for Kit.

There are some jealousy issues between Damon and Kit. Damon is jealous of the time that Kit is spending with Justin. He knows that they are just friends and that they are working on a case, but he can’t seem to help himself, being all alpha male and all. Kit isn’t much better when a former lover of Damon’s comes back to Orlando and wants to join his pack. No matter how alpha Damon gets, Kit does not let him walk all over her.

“You do not speak for me.” He opened his mouth and I whirled on him, driving my finger into his chest. “Ever.”

This is a fun and exciting series that delivers all the feels. The Colbana Files has ripped my heart out more than once and it always has me coming back for more. These books always end leaving you wanting more. I can’t express how much I love this series. I think it is one of the most underappreciated urban fantasy series on the market. I would recommend starting the series with book one. The good news is that Daniels just released a boxed set of the first four books in the series, so you can pick them all up at one time. I highly recommend this series to fans of Kate Daniels, Downside Ghosts or Night Huntress series.