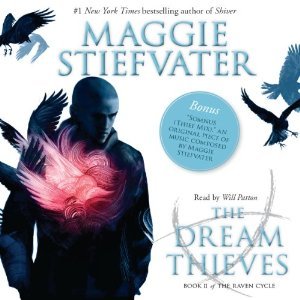 If you could steal things from dreams, what would you take?

One secret: Ronan can bring things out of his dreams.

And sometimes he’s not the only one who wants those things.

Ronan is one of the raven boys — a group of friends, practically brothers, searching for a dead king named Glendower, who they think is hidden somewhere in the hills by their elite private school, Aglionby Academy. The path to Glendower has long lived as an undercurrent beneath town. But now, like Ronan’s secrets, it is beginning to rise to the surface — changing everything in its wake.


THE DREAM THIEVES was marginally better than THE RAVEN BOYS and that was largely thanks to the final 100 pages not the 300+ that preceded them; however it still didn’t quite measure up to what I’ve come to expect from an author of Maggie Stiefvater’s writing genius. Perhaps I’m missing out on some of the complexities of this tale by listening to it rather than reading, I don’t know, but I’m beginning to feel like something just isn’t clicking because the majority of reviewers are shouting from rooftops about this series. The story focused mainly on Ronan, and although I liked his character, I missed Blue, Gansey, Noah & Adam’s plot threads, and at times I found myself rather bored with the linear direction of this audiobook.

Looking at the title of #3, I think it’s safe to assume that going forward the author intends to dedicate one installment to each teenager. It’s Lynch’s turn in the limelight, and he just so happens to be my least favourite Aglionby student. He won’t be winning any popularity contests with me anytime soon, but I feel like I now have a better understanding of his innards. This tale was more straightforward and less dream-like than THE RAVEN CYCLE’s debut, however Stiefvater compensated by showcasing the messed-up things that live inside Ronan’s head. He teams-up with Kavinsky, and learns more about his particular skill set, I was surprised to find a few kinks in his armor where Gansey & his little brother were concerned, and I liked that he brought sexual diversity to the cast.

The introduction of the Gray Man piled on more intrigue to the boys’ search for Glendower, as did his employer, Greenmantle. I was disappointed that there weren’t more chapters from Noah’s POV, especially after the bomb that the author dropped on us at the end of the last novel; it felt like a waste of a cliff hanger. Other than the disappearance of Cabeswater, the Welsh King plot thread was practically non-existent which was weird considering that it was the main focus of book 1. The male characters have stronger personalities than all of the female ones combined which kind of trivialized Blue’s role, and the fact that she’s still stressing over her first kiss while everyone else is dealing with much bigger issues made her concerns seem silly.

I had an easier time with Will Patton’s delivery in this follow-up because I was able to overlook his questionable pronunciations of certain words having looked them up previously when I reviewed THE RAVEN BOYS. He doesn’t whisper nearly as much as he did in the last installment on account of the less mysterious nature of this tale which was a good thing, but his female voices are still lacking, especially Persephone’s. And, why the heck Kazinsky sounded like The Fonz is beyond me. This audiobook featured original music that was both written and performed by Maggie Stiefvater which was a cool value add, however I think I might try reading BLUE LILY, LILY BLUE to see if my issues with this series lie more with the narrator than the story itself.

THE DREAM THIEVES was anything but predictable, and Maggie Stiefvater’s writing is so far beyond average that it transcends words.

66 responses to “Audiobook Review: The Dream Thieves by Maggie Stiefvater”