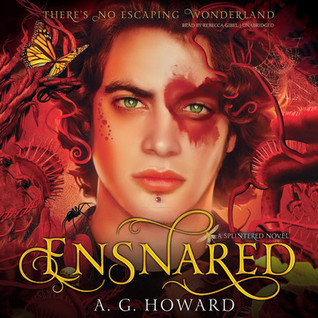 After surviving a disastrous battle at prom, Alyssa has embraced her madness and gained perspective. She’s determined to rescue her two worlds and the people and netherlings she loves, even if it means challenging Queen Red to a final battle of wills and wiles … and even if the only way to Wonderland, now that the rabbit hole is closed, is through the looking-glass world—a parallel dimension filled with mutated and violent netherling outcasts.

In the final installment of the wildly popular Splintered trilogy, Alyssa and her dad journey into the heart of magic and mayhem in search of her mom and to set right all that’s gone wrong. Together with Jeb and Morpheus, they must salvage Wonderland from the decay and destruction that has ensnared it. But if they succeed and come out alive, can everyone truly have their happily ever after?

Before I launch into my review, I feel that it is important to mention that I LOVE all things ALICE IN WONDERLAND, so even though this trilogy contained certain elements that I normally find intolerable (i.e. love triangles), I’m not holding it to my usual standards because of my Lewis Carroll bias. Nevertheless, I enjoyed my final trip down A.G. Howard’s rabbit hole, or rather through the looking-glass, and was satiated by the ending, but ENSNARED also wasn’t without its faults. The last 1/4 was 5-star worthy with its creeptastic Netherlings, sharp plot twists, and original resolution; however the 3/4 that preceded it was slow paced and disorganized.

After the discoveries that were made in UNHINGED, I was happy that ENSNARED opened with Alyssa’s dad’s back story, although I could have done with more recap because I’ve read over one hundred novels in the year long lull between books 2 and 3, so understandably I was a bit fuzzy on the details. I actually listened to the first two hours TWICE seeing how I dozed off a few times, and thought I’d missed it, but no, the earlier chapters were just plain sluggish. Once I got past that hurdle, my jaunt in AnyElsewhere was fun; I loved meeting all of the Wonderland outcasts, and was delighted by Jeb’s fall from grace because it leveled the romantic playing field.

I’ve had the damnedest time picking a team in this series due to both suitors being kinda offensive, so I was somewhat hoping that Aly would go all Red Queen on their hides, and proclaim “Off with their heads!” Unfortunately, Young Adult typically doesn’t believe in bloody HEA’s which means that that option was out, but Howard’s solution was the next best thing. I liked her unconventional ending to this trilogy’s love triangle, although it didn’t come as a big shock because it was kind of hinted at in the previous installment. This book was also in desperate need of an epilogue, and the author was gracious enough to deliver, so amen to THAT!

I started this series in audio, and it was only fitting that I finish it that way too. Rebecca Gibel is a savvy narrator who was more than up to the task of bringing the SPLINTERED world to life for the third time. I loved how committed she was to the characters, especially Morpheus, and her range of Netherling voices never ceases to amaze, in both their diversity, and ghoulish pitch. Alyssa’s progression from insecure teenage girl to immortal monarch was just as evident in the writing as it was in Gibel’s delivery. I will definitely be seeking out other audiobooks that have her listed as the narrator after reaping the benefits of this threefold performance.

ENSNARED wasn’t all that I was hoping for, but it’ll do.