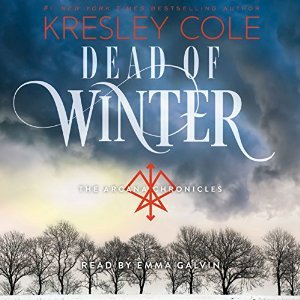 Can Evie convince her rival loves to work together? Their survival depends on it in this third book of #1 New York Times bestselling author Kresley Cole’s Arcana Chronicles, a nonstop action tale of rescue, redemption, and a revenge most wicked.

Heartbreaking decisions
Evie was almost seduced by the life of comfort that Death offered her—until Jack was threatened by two of the most horrific Arcana, The Lovers. She will do anything to save him, even escape Death’s uncanny prison, full of beautiful objects, material comforts…and stolen glances from a former love.

Uncertain victory
Despite leaving a part of her heart behind with Death, Evie sets out into a frozen and perilous post-apocalyptic wasteland to meet up with her allies and launch an attack on The Lovers and the vast army they command. Such formidable enemies require a battle plan, and the only way to kill them once and for all may mean Evie, Jack, and Death allying. Evie doesn’t know what will prove more impossible: surviving slavers, plague, Bagmen and other Arcana—or convincing Jack and Death to work together.

Two heroes returned
There’s a thin line between love and hate, and Evie just doesn’t know where she stands with either Jack or Death. Will this unlikely trio be able to defeat The Lovers without killing one another first?

This audiobook was #4 on my most anticipated reads of 2015 list, so it’s with a heavy heart that I give it 3-stars. The dystopian universe created by Kresley Cole in THE ARCANA CHRONICLES that I’ve come to adore was dwarfed by this series’ love triangle, and the plot whittled down to Evie’s boy toy choice. Now, perhaps I’m slightly bitter because she didn’t go with the team that I was rooting for, but in the end that really didn’t seem to matter because the author threw another cliffhanger at us making the heroine’s decision moot.

My primary fascination with these novels stemmed from the world-building’s link to Tarot, and so far we’ve met new cards in every installment, until DEAD OF WINTER. Ok, that’s not entirely accurate because The High Priestess and The Emperor threw their lot in with the rest, and we also learned more about The Lovers and The World’s abilities, however these elements were so microscopic in comparison to the drama between Evie / Jack / Aric that I barely took note of them. I did enjoy the flashbacks to what happened to Death and the Cajun post ENDLESS KNIGHT, but again, I needed more.

This story was all about the love triangle which just plain sucked because the trio wound up working together for the better part of this book, and that in turn lead to angst, angst, and more angst. Subsequently, all of the originality was siphoned out of this series in favour of the biggest Young Adult trope of them all. In the past, I’ve liked the apocalyptic flavour of THE ARCANA CHRONICLES, yet this latest installment was no longer about surviving Baggers, cannibals, and the game, but rather what boy Evie Greene’s heart belonged to. Yes, that quagmire was solved, except no, not really.

Emma Galvin’s narration was like a lighthouse in a storm because without her delivery to keep me listening, I most likely would have finished this audiobook in a week instead of two days. I enjoyed the intensity with which she performed this tale, and the slower pace at which she reads this series definitely draws you in. Jack piles on the French in this novel, and that was unfortunate because Galvin’s mastery of that language really leaves something to be desired, but she tried her best, and this particular shortcoming is only noticeable to francophones, so I let it slide.

DEAD OF WINTER could have been a grand conclusion to THE ARCANA CHRONICLES; instead there will be a book 4.

68 responses to “Audiobook Review: Dead of Winter by Kresley Cole”