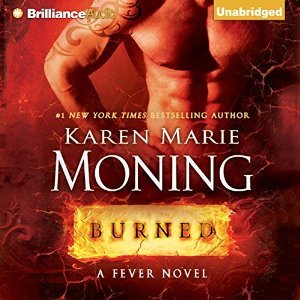 It’s easy to walk away from lies. Power is another thing.

MacKayla Lane would do anything to save the home she loves. A gifted sidhe-seer, she’s already fought and defeated the deadly Sinsar Dubh—an ancient book of terrible evil—yet its hold on her has never been stronger.

When the wall that protected humans from the seductive, insatiable Fae was destroyed on Halloween, long-imprisoned immortals ravaged the planet. Now Dublin is a war zone with factions battling for control. As the city heats up and the ice left by the Hoar Frost King melts, tempers flare, passions run red-hot, and dangerous lines get crossed. Seelie and Unseelie vie for power against nine ancient immortals who have governed Dublin for millennia; a rival band of sidhe-seers invades the city, determined to claim it for their own; Mac’s former protégé and best friend, Dani “Mega” O’Malley, is now her fierce enemy; and even more urgent, Highland druid Christian MacKeltar has been captured by the Crimson Hag and is being driven deeper into Unseelie madness with each passing day. The only one Mac can depend on is the powerful, dangerous immortal Jericho Barrons, but even their fiery bond is tested by betrayal.

It’s a world where staying alive is a constant struggle, the line between good and evil is blurred, and every alliance comes at a price. In an epic battle against dark forces, Mac must decide who she can trust, and what her survival is ultimately worth.

This novel was obviously for all of the ICED haters out there, so if you fall into that category, you’ll probably love BURNED. As for the rest of us, this installment was a tremendous letdown. Karen Marie Moning tried to right the wrongs of book 6 by reshaping several of the characters into more ‘acceptable’ versions of themselves, distracting readers from this story’s numerous plot holes with an outrageous amount of POVs, and taking the easy (predictable) road twist-wise instead of the one less traveled. It wasn’t awful, I still enjoyed the writing, narration, and being back in this world, but the FEVER edge is gone.

I kind of wish that I’d bypassed this audiobook altogether because it completely obliterated the Mac & Barrons of old. Some HEAs should NOT be revisited! Apparently sex has fried Miss Lane’s brain, and she’s now a halfwit unworthy of the nine’s respect more concerned with talking to herself than saving Dublin. Jericho ghosts through this novel, finally avenges his lover, but not really because he doesn’t unleash his beast for her. Their chemistry as a couple is dead, and instead in its wake we’re left with heaps of empty steam. And, the source of this installment’s title was just another log on the fire of LAME.

I don’t have nearly enough fingers to count how many POVs we cycled through. Something definitely needed to be done about Dani’s age in order for this series to continue on its current trajectory, however KMM’s solution was entirely too child-proof. As was her time-saving use of the Sinsar Dubh, and the supposed cliff hanger was a two-bit sneeze in comparison to those from previous books. Ryo underwent a major personality overhaul which so didn’t suit him, and I really wish that the author had built upon the new Unseelie arc. I liked learning more about the nine, Lor’s scenes were fantastic, and Jada showed promise, but they were just duct tape, not a permanent fix.

The narrators were the heart and soul of this audiobook. If I were to rate this listen based wholly on their performances, it would be a resounding five. Phil Gigante’s voice gave me shivers when JZB’s words fell flat, and I loved the subtle variations of his Scottish accents when he was reading the MacKeltars. Natalie Ross did a comparably awesome job of the female characters with her Irish fluctuations, and somehow managed to bring excitement to a story that would have otherwise been boring without her leading the charge. I also appreciated that both narrators gave an echo / cave-like quality to the internal dialogues, it made them easy to spot.

BURNED is an island that would have been better left unexplored in the FEVER realm.