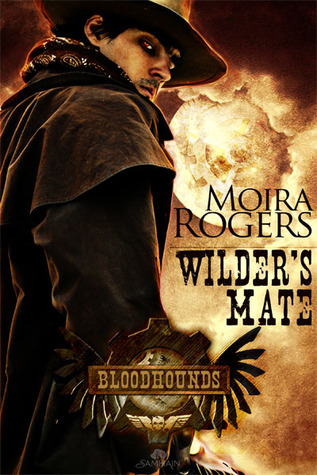 Wilder Harding is a bloodhound, created by the Guild to hunt down and kill vampires on America’s frontier. His enhanced abilities come with a high price: on the full moon, he becomes capable of savagery beyond telling, while the new moon brings a sexual hunger that borders on madness.

Rescuing a weapons inventor from undead kidnappers is just another assignment, though one with an added complication—keeping his hands off the man’s pretty young apprentice, who insists on tagging along.

At odds with polite society, Satira’s only constant has been the aging weapons inventor who treats her like a daughter. She isn’t going to trust Wilder with Nathaniel’s life, not when the Guild might decide the old man isn’t worth saving. Besides, if there’s one thing she’s learned, it’s that brains are more important than brawn.

As the search stretches far longer than Wilder planned, he finds himself fighting against time. If Satira is still at his side when the new moon comes, nothing will stop him from claiming her. Worse, she seems all too willing. If their passion unlocks the beast inside, no one will be safe. Not even the man they’re fighting to save.

This is my first steampunk read. I haven’t read much from Moira Rogers, but I love the Beyond series by Kit Rocha, who is the same pair of authors under a different pen name.  I downloaded this as a free ebook from Amazon, so I thought I should go ahead and read it.  I really enjoyed this book.  There are vampires and bloodhounds.  It took me a while to figure out the bloodhounds, but they are former humans and while they seem to have some characteristics with werewolves, but yet not. They are affected by the New Moon and their sexual hunger hits its peak at that time.  They are created and work for the Guild.

Satira is an inventor.  Her mentor has been kidnapped by vampires and the Guild has sent the bloodhound, Wilder to help her get him back.  This is an interesting introduction to steampuck.  I loved the combination of old wild west and new inventions. They ride in carriages, but have some pretty interesting technology, especially in weapons.

The romance between Wilder and Satira was great.  Bloodhounds are discouraged from taking mates.  He lives a lonely life and usually goes to a brothel for a woman or maybe two for the night of the new moon, to meet his sexual urges.  He wants to get this mission over with before the new moon starts.  He does not want to be with Satira when new moon rises.  The more he is around her, the more he appreciates her intelligence.

Being a woman in this old wild west, means that Satira’s intelligence goes unnoticed by most.  She tries to hide her beauty, as that would put her back into the “woman” category.  She dresses in men’s clothing.  She just wants to work on her inventions.  She frowns on the fact that her best friend in the sex trade, but everyone has to make a living, right?

This story has everything that I would expect from this writing duo.  The characters are intriguing.  I love the world.  The secondary characters leave you wanting to learn more about each of them.  The bloodhound species is very interesting and I can’t wait to learn more about them.  Even the evil vampires make want to know more.  This is a novella and a shorter story, so the story moves fast, but still has everything you like in a PNR style romance.