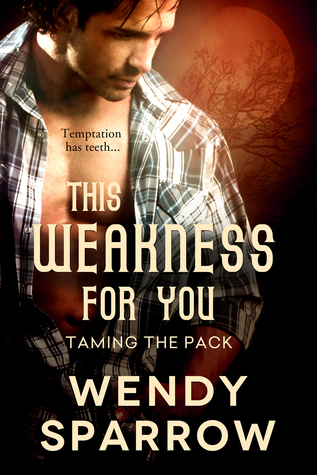 She's exactly what he wants to sink his teeth into...

Jordan Hill is his pack's Alpha. The Big Bad Wolf. And after his last breakup, he's opting to be the lone wolf, too. But then his rival's little sister—a human, of all creatures—comes to his door. And suddenly, what should be a tasty little snack turns out to be something more than Jordan could ever imagine...

Christa Hansen is simply looking for a place to stay. Yet the dark shifter smells irresistibly like forever. But getting involved with the wolf who tried to kill her brother—twice—is lunacy. Besides, in the unforgiving, shadowed world of shifters, there is no room for weakness. And falling for her family's enemy won't just be her downfall... it will be his, too.

I found this author earlier this  year when I read the first book to this series, Past My Defenses.  I saw someone tweet about this author writing about a werewolf that had massive allergies to everything under the sun.  I bought and read that book and really enjoyed it.  I mean, how can you not love a story about a potential alpha werewolf who can be taken out by a house cat or marshmallows? So I jumped at the chance to review book two in this series.

We’ve already met our main characters in the first book, even if their roles weren’t large roles.  Crista is the sister of Dane, book one hero.  She owns the house cat that I previously mentioned.  The cat’s name is Lucifer.  Crista is a very strong individual.  She is a human who knows nothing about werewolves.  She also has MS, multiple sclerosis.  If you are not familiar  with this disease, that can really take a lot out of a person.

Jordan is the alpha of the pack.  He is also the only Lycan in his family.  While both of his parents are full Lycans, neither of his brothers ever shifted.  Then not only is is a Lycan, but he becomes alpha of a pack.  This made for a lot of struggles between him and his brothers.

In this world, a couple will scent match, meaning that they know their mate at first smell.  Jordan fights the scent match because he has not had much luck with women.  He has had several girlfriends who were crazy. So when he scent matches with Crista, he is extremely hesitant.

There is suspense in this story as Jordan helps some former packmates to track some poachers. Poachers are humans who hunt and kill Lycans to sell their organs on the black market.

23 responses to “Review: This Weakness for You by Wendy Sparrow”