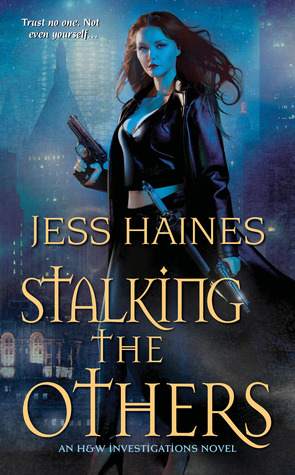 Once, she was one of the good guys–or as close as a New York P.I. can get. Then Shiarra Waynest was drawn into the world of the Others. Every faction has its own loyalties and agenda. And Shia’s recent betrayal by her ex-boyfriend means that she may be on the verge of becoming a rogue werewolf at the next full moon.

Of course, with all the threats against her, Shia’s not sure she’ll live long enough to find out. The enigmatic vampire Royce wants her back in his clutches, as do two powerful werewolf packs, along with the police. Instead of going into hiding, Shia is enlisting the aid of her enchanted hunter’s belt and every dirty P.I. trick she knows. If she’s going down, she’ll take out as many of her enemies as she can–and hope that in the process, she keeps whatever humanity she has left…﻿

After the dramatic exit Shia made in DECEIVED BY THE OTHERS, reading the next installment became my #1 priority, I only wish that I could fly through all series the way I’m guzzling H&W INVESTIGATIONS! The heroine turns into a lean, mean, killing machine in this book, and I just loved watching her serve up a can of Others whoopass. The blurb outs Chaz as a douchebag, so I’m psyched that I no longer have to curb my seething hatred in order to avoid spoilers on that front, and can now full-out own my Team Royce status, doubly-so after that last scene—whoa Nelly! I’m a little nervous as to what the loss of the hunter’s belt, and the capitulation to Alec’s demands might mean for Waynest, but I have confidence in Jess Haines.

I’d suspected that we hadn’t seen the last of the White Hats, even after the falling out in TAKEN BY THE OTHERS, and although Jack isn’t exactly my favourite character, I still enjoyed getting to know him better. Sometimes the devil you know is better than the one you don’t, so when confronted with the possibly of becoming a werewolf, Shia turns to this anti-Others group for help. Now, I use that term loosely because their idea of neighbourly love involves revenge and assisted suicide. That is until some interesting dets about their fearless leader surface, and the line between good & evil becomes blurred. I was taken aback by this latest newsflash because it was wholly unexpected, and quite the twist at that!

STALKING THE OTHERS was mostly about Waynest evening the score with the Sunstrikers, and I liked that the protagonist got the opportunity to show readers what she’s made of, from her nifty P.I. tricks to her ninja moves thanks to Isaac (the belt). One of my blogger peeps made a surprise cameo appearance as a werewolf, and I couldn’t get enough of Shia’s tooth and nail catfight with Kimberly, the homewrecker! I was happy with the way things went down between our girl and Dillon, but her encounter with Chaz was a bit of a letdown. The reasons behind it made sense in a big picture kind of way, however on the flip side I REALLY wanted Waynes to cut her ex-boyfriend’s nuts off, and shove them down his throat. Just saying.

Royce’s part in this story was minuscule, but the scenes he was in were real game changers. I keep expecting him to vamp out on Shia, yet in reality he’s turning out to be one of the most consistent characters in this series. His experience and insight are invaluable, and ended up pulling the heroine’s butt out of the fire. Again. That last chapter was a long time in coming, and thank goodness that there was a preview for the next installment in the final pages of this novel because I needed it as badly as my next breath after that firebomb. The title of book 5 is making me fidgety though, just when Waynest’s love life is beginning to even out, the author has to go and taunt us with FORSAKEN BY THE OTHERS. I’m scared.

For the most part, STALKING THE OTHERS was a 4-star read, but that ending earned an extra .5 from me. Wowzers!

62 responses to “Review: Stalking the Others by Jess Haines”