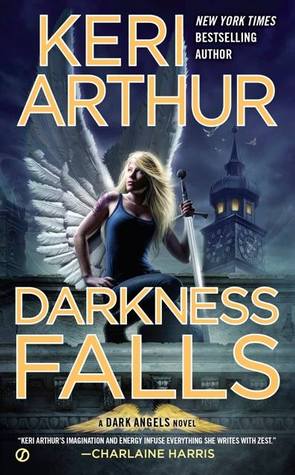 New York Times bestselling author Keri Arthur brings her Dark Angels series to a breathtaking conclusion as half-werewolf, half-Aedh Risa Jones treads a knife’s edge between the salvation of the human race and its total annihilation.

The search for the last key to the gates of hell has begun, and half-werewolf, half-Aedh Risa Jones is in more danger than ever—and one misstep could prove ruinous. It's only a matter of time before Madeleine Hunter, the dangerous head of the vampire council, begins her hunt for complete domination. And for Risa, that comes with an alarming ultimatum: hand over the last key to Hunter or, one by one, her loved ones will die.

Now, it’s a race against time for Risa to save those she loves, and to stop Hunter's apocalyptic plan to open the very gates of hell.

I was on the brink of kissing this series goodbye after the previous installment because the plot became more about character drama than saving the world, and it has taken seven books for Risa to find three keys which was simply unacceptable. Keri Arthur left every single thread unresolved until DARKNESS FALLS, so this closer was an incredibly tall order, and while some arcs were dealt with entirely too neatly (i.e. Tao’s), the author was for the most part successful in concluding DARK ANGELS with a bang. She finally went back to doing what she does best, writing kickass Urban Fantasy.

This novel hit all of the keynotes with its recap, and for that I was grateful because it had become quite the jumbled mess inside my brain what with all of the backstabbing, keeping track of who impregnated who, and the various villains’ motivations. Thankfully, no new plot threads were piled on, and the story was all about defeating the sorceress, stopping Hunter, and locating the last key. Several of the characters from Arthur’s RILEY JENSON GUARDIAN series also contributed to the match point including the heroine, Quinn, Rhoan, and Jack. Oddly enough, my favourite sidekick was Amaya, Risa’s bloodthirsty demonic sword; her running commentary was an absolute riot.

The unexpected turn that Lauren’s story line took caught me completely off-guard; the author sowed the seeds for this reveal in book 1, and I loved how it all unfolded. I was also overjoyed that Azriel was kidnapped in this installment instead of Jones because the reverse has happened far too often in the DARK ANGELS universe. And, I appreciated that Arthur made the concluding chapters all about Hunter; the near insurmountable task of conquering such a formidable foe deserved nothing less. I liked how Risa tapped into every resource, ally, and weapon available in order to come out on top, and the resulting confrontation was indeed series finale worthy.

There was one character death that possibly went unnoticed by most readers; however devotees of Arthur’s above mentioned books surely felt the cataclysmic loss as much as I did. Risa & Azriel made a fab team, and I was happy that they were able to set their differences aside to not only stop the apocalypse, but also for the sake of their unborn child. These two more than deserved to sail off into the sunset, and I really enjoyed the sexually charged banter throughout this tale, although I wish that they’d acted on it a bit more. The ending did leave some room for another potential spin-off, but personally I’m past ready to bid adieu to this world.

DARKNESS FALLS was worth the wait, and the tumultuous path to get there (mostly).