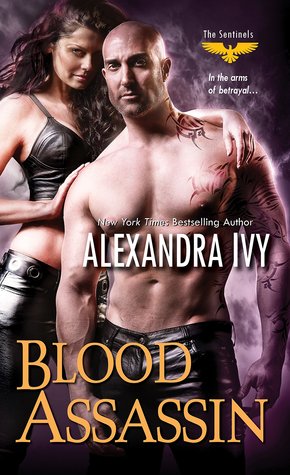 They are the outcasts of humanity. Blessed with power. Cursed by fate. Driven by passion. The Sentinels have returned. . .
Out Of The Shadows

At six-foot-three and two-hundred-fifty pounds, Fane is a natural born guardian. A flawless mix of muscled perfection and steely precision, he has devoted years of his life to protecting a beautiful necromancer. But after she found love in the arms of another, Fane has been a warrior adrift. He swears allegiance only to the Sentinels. And no woman will ever rule his heart again. . .

Not only a powerful psychic, Serra is that rare telepath who can connect to minds through objects. When the daughter of a high-blood businessman is kidnapped, Serra agrees to help. But when she stumbles onto a conspiracy involving secrets sects and ancient relics, her life is in mortal danger--and Fane is her only hope. Is the warrior willing to risk his body, his soul, and his heart, for Serra? Or will one last betrayal destroy them both?

Alexandra Ivy was a new author to me when I stated this series by reading Born in Blood, which I really enjoyed. I read the next story which happened to be a novella(Out of Control), and thought it was good but not great. Blood Assassin fell just a bit short of really liking it, for me.

These books feature what are known as High Bloods, or paranormal creatures. This group lives in a domed complex named Valhalla, and is ruled by the Mave, a powerful witch. The inhabitants are guarded by Sentinels. Sentinels are men with tattoos all over their body that protect them from magic attacks. Serra is a powerful psychic that has loved Fane, a Sentinel from the minute she first saw him years before. He rebuffs her because he doesn’t want her to live worrying about all the danger that he is in on a daily basis. When an incident occurs that isolates them away from Valhalla, and brings them together to work under horrible stress, all bets are off as far as romance.

The premise of this book was good. It had all the elements of romance, danger,and suspense, that I have come to love in paranormal books, and was tied all together with creatures of all different types. The characters were interesting, and even the villains(one in particular) were fully realized, and not just one dimensional as in some books. The romance was sweet, but not in the G rated way, and the sex scenes were extremely hot.

So why wasn’t it as good a read for me as the first one? In a word, slow. And I got bored at times when I really shouldn’t have. Even the sex scenes after awhile, began to seem like filler at times. I kept putting it down, and honestly I thought I would never finish it. In keeping with the honesty, I should mention that I’ve had a lot going on, so maybe if I had read it at a different time, I might have enjoyed it more. I can only go by what my experience with the book was, at this time.

I think(hope) the next one features the Mave, as her character is fascinating, so I will probably be reading that one as well. She, and her love interest, had a lesser role to play in this story so we already pretty much know where it’s heading. And maybe it would be better if we didn’t already know that. The same thing applied to this book as well. Most of the time, I would rather see the couple meet, and then fall in love. Just personal preference for me. So far in this series, all of the couples have known each other before the book starts. Of course there are exceptions to this preference of mine.

I know a lot of people have already given this book good reviews, so even though it wasn’t exactly the best read for me, it could be a five star one for you.