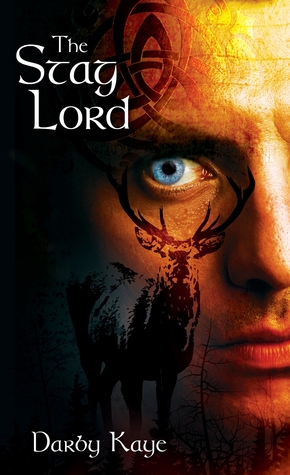 On the run across America from a vengeful shape-shifter, Bannerman “Bann” Boru has only one thing on his mind: keeping himself and his young son, Cor, alive.


Until he meets Shay Doyle, healer and member of a secret group of immortal Celtic warriors, the Tuatha De Danaan, living in modern-day Colorado. When Cor is injured, Bannerman is forced to accept her help. He quickly realizes that the golden-haired Healer is shield-maiden tough and can hold her own on the field of battle with the big boys. And Shay soon discovers that there is more to Bann than meets the eye.

Now, with the shape-shifter Cernunnos teaming up with the local pack of Fir Bolgs (Goth wannabes with a nasty taste for children), Bannerman, Shay, her wolf-dog, Max, and the rest of the Doyle clan must figure out how to battle one insane god.

When I found out that Darby Kaye (Karchut) was making the jump from Young Adult to Urban Fantasy, I was beyond fired up because I loved the father / son bond that was at the center of her GRIFFIN series, and couldn’t wait to see her work her magic on this genre. The relationship between Bann & Cor was indeed wonderful, then the author took her strong character dynamics a step further by tacking on a love interest, and strong family ties with Shay & the Doyle clan. Fae story lines aren’t exactly scarce in paranormal, and yet Kaye still managed to inject originality into their mythology while also spinning a delightful tale filled with action, mystery, and romance.

Children are usually a liability in UF, and have a habit of messing with a novel’s pacing because the protagonist constantly has to bail them out of trouble. That so wasn’t the case here; yes, Cor made a few bad calls, but as a whole he was an asset to THE STAG LORD’s plot, plus he helped make being a father look damn sexy. The interactions between the two Boru males were the high points of this story; I liked how conflicted Bann was at times with balancing being a dad and his own happiness vis-à-vis his growing feelings for Shay. The spunk that the eight year old brought to the dialogue, and his relationship with Max the dog, were stunningly lifelike.

I was happy that Kaye took her time with the romantic aspects of this book; Bann & Shay’s connection flourished gradually over the course of three weeks, and progressed from friendship, to bed buddies, to coupledom at a believable rate given their attraction. I loved how Doyle understood that Boru’s kid would always be #1 in his life, and that she knew when to push, and when to take a step back. My panties were on fire for this series’ tortured hero with his swoon worthy Irish brogue, and beautiful heart (and bod!). Shay was no shrinking violet either; I adored her quiet strength, steadfastness, and that her bravery equaled Bann’s.

The lore surrounding the Tuatha De Danaan, and the origins of Cernunnos’ vendetta against the Boru family made for some compelling world-building, and I enjoyed all of the various monsters that came along with them. There were also a couple of impressive plot twists, although that last one was somewhat upsetting. I did however find that this novel dawdled a bit towards the end; Bann & Cor’s about-face didn’t really add anything to the story other than extra pages, and the set-up for the next installment was overly blatant. I am curious though as to why Cernunnos deviated slightly from his kill Boru agenda. Book 2 awaits!

THE STAG LORD was a fine kick-off to the BANNERMAN BORU series, and a superb Urban Fantasy debut by author, Darby Kaye.

70 responses to “Review: The Stag Lord by Darby Kaye”