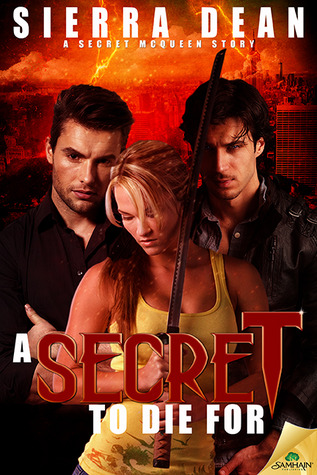 No one is safe.

Secret McQueen thought she’d seen it all, but that was before she, Desmond and Holden came home to find New York City burning and the streets overwhelmed with the walking dead. Now, in a race against time, she must find out who is responsible for unleashing hell on Earth.

For that, she’s going to need a whole new team of vampire wardens to help round up the perpetrators, who turn out to be a gang that makes Sons of Anarchy look like toddlers on tricycles.

Her quest across the city brings old friends and enemies out of the woodwork and reminds Secret once and for all why mercy and forgiveness are not always prudent. Lives will be lost, sacrifices will be made, and when the dust settles, nothing will ever be the same again.

With no time to mourn her losses, the only question remaining is if Secret can survive long enough to stop the apocalypse…or if this is the one challenge that will finally drown her in rivers of undead blood.

Warning: The final book in the Secret McQueen series has it all: hot kisses, unexpected guests, and enough tear-jerking moments to require a whole box of tissues. You’ve been warned.


No character in the history of Urban Fantasy has had to work for their HEA as hard as SECRET MCQUEEN, and still, she’s not quite there yet. There’s the small matter of the zombie apocalypse left to deal with. I knew Sierra Dean was going to go big, but I had no idea the extent of it until I got my grabby hands on A SECRET TO DIE FOR, and read and read until I collapsed in a heap of fan-girl bliss. This is how a heroine of McQueen’s caliber is supposed to go out—in a devastatingly wonderful, blood-soaked supernova of FUCK YEAH! All of this series’ characters are in it to win it, some survive, and some don’t. I devoured this book with a tissue in one hand and a beer in the other, and I strongly advise you to do the same.

First off, let me start by saying that the final Big Bad was SICK, and not just because she was named after one of my favourite blogger peeps. The army of the walking dead that has invaded New York was a surprise in that they aren’t real. You see, zombies don’t exist in this particular paranormal universe, so to defeat them Secret had to dig deep to uncover their source. And, what better way than enlisting the help of her vampire warden bloodhounds? Oh right, she pissed off the council AGAIN, and must hit pause to stand trial while the city is burning. McQueen’s secret is out, so is Juan Carlos’ (Ah, HA!), and the apocalypse wouldn’t be a party without the fae king himself offering up some underhanded help.

When I said that all of this series’ characters make a final stand, I do mean ALL, which is precisely how an end installment should play out. Heck, even Morgan, the conniving werewolf that was exiled to Siberia, drops in to stab Secret in the back for old time sake. I loved this last hoorah with Tyler, O’Brian, Mercedes, Reggie, Clementine, Desmond, Sutherland, Genie, Holden, Sig, Siobbhan, Shane, Keaty, Calliope, Aubrey, aannnd yes, Lucas too. It hurts me to say this, but I can’t justify hating him anymore after his actions in this novel. Multiple characters don’t make it out of this one alive, however there was one death in particular that cut me to the core, and I still haven’t quite forgiven Dean for pulling that trigger.

Last but definitely not least is Secret, her badass-ery somehow managed to reach whole new levels of amazeballs, and that pesky prophecy that’s been riding her coattails for several installments now came true in the most unlikely of ways. I bawled, I cheered, I flailed, and I fan-girled ’til I could fan-girl no more. I was beyond thrilled with how Dean ended things; the way she dotted her i’s, and crossed her t’s was sublime. I felt sorry for the loser in the Secret / Desmond / Holden love triangle, but there’s no arguing the fact that McQueen chose the right man for her. The only thing that’s allowed me to sleep through the night now that this series is over is the knowledge that there’s a spin-off launching next year.

A SECRET TO DIE FOR was the best early Christmas present that Sierra Dean could have possibly given me. Secret McQueen, you will be missed!

74 responses to “Review: A Secret to Die For by Sierra Dean”