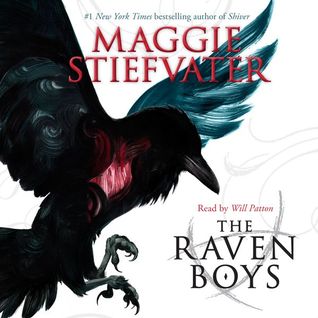 Every year, Blue Sargent stands next to her clairvoyant mother as the soon-to-be dead walk past. Blue never sees them--until this year, when a boy emerges from the dark and speaks to her.

His name is Gansey, a rich student at Aglionby, the local private school. Blue has a policy of staying away from Aglionby boys. Known as Raven Boys, they can only mean trouble.

But Blue is drawn to Gansey, in a way she can't entirely explain. He is on a quest that has encompassed three other Raven Boys: Adam, the scholarship student who resents the privilege around him; Ronan, the fierce soul whose emotions range from anger to despair; and Noah, the taciturn watcher who notices many things but says very little.

For as long as she can remember, Blue has been warned that she will cause her true love to die. She doesn't believe in true love, and never thought this would be a problem. But as her life becomes caught up in the strange and sinister world of the Raven Boys, she's not so sure anymore.


I’m a huge fan of Maggie Stiefvater’s THE WOLVES OF MERCY FALLS trilogy, and I recently listened to SINNER in audio which is what prompted me to give this series a whirl. Well, that and the fact that I won a copy from Loupe at Hot Listens (thank you!!!). The author’s lyrical writing style that I’ve come to know and love was out in full force, I connected remarkably well with all of the characters after only one installment, and I also really liked that this wasn’t your typical paranormal listen in that it doesn’t feature the usual supe suspects. However, I found that the lore was a lot to take in—I had to listen to several chapters more than once in order to grasp all of the intricate details—and, I wasn’t completely sold on the narrator’s delivery. But, I remember not having instantly clicked with SHIVER, so I’m more than willing to give THE DREAM THIEVES a chance, I just won’t be downloading a copy asap.

The first few chapters were kind of meh because all of this series’ players were introduced, but Stiefvater didn’t connect the dots until three hours in which caused THE RAVEN BOYS to have a rather slow start. Then all of the symbology, Tarot aspects, and Welsh lore kicked in, and I was once again swept again by this author’s masterful world-building skills. Readers are left with way more questions than answers, however that’s to be expected from a debut installment, so even though it was frustrating, I was still pleased with the end result. I’m infinitely curious about the corpse road, ley lines, Cabeswater, Glendower, the dreaming tree, and what it all means because at the moment there seems to be many MANY pieces to this puzzle, and I don’t have two clues as to how they fit together.

I took an immediate liking to all of the characters; from Adam the trailer park trash trying to make it on his own, to Gansey the wealthy adventurer that attempts to be middle-class but fails horribly, and Blue the only non-psychic among a family of fortune tellers who just wants to be special too. The prophecy surrounding Sargent’s true love added an extra layer to the intrigue, then there was Whelk & Neeve’s individual motivations, and the whole possibility vs reality angle. And, just when I thought that I was beginning to figure the story arc out, Stiefvater goes and drops the Noah bomb on me, followed by multiple visions of likely outcomes, and a semi cliff hanger ending about a ghost’s dreams and a raven named Chainsaw. Colour me thoroughly confused!

I liked Will Patton’s narration, but I didn’t love it, and there were a few reasons why. The main one being that he whispered a lot, and although I found that it fit this novel’s darker tone, it also made him difficult to understand. The whole time I was listening, I thought that Cabeswater was actually caves water, and this happened for several words that I later had to look-up in order to write an accurate review. This also may have been what caused me to have to re-start several chapters rather than putting all of the blame solely on the author’s complex world-building. I really disliked the voice he used for Persephone, and for the most part, he felt too old for a Young Adult book. However, after eleven+ hours of him streaming through my earbuds, he did grow on me, so I’m not prepared to write him off just yet.

THE RAVEN BOYS made me go WTF way too many times to count, as all good mysteries should, so mission accomplished Maggie Stiefvater. We will meet again in THE DREAM THIEVES!

84 responses to “Audiobook Review: The Raven Boys by Maggie Stiefvater”