Rabid Reads was one of the first blogs to host Laila Blake back in April 2013 when her debut book, BY THE LIGHT OF THE MOON, was released. And, we’re psyched to be able to do it again for A TASTE OF WINTER. The wait was worth it just for the cover re-vamp. So pretty!

It was almost nightfall when they dared to approach the small village at the edge of the forest. It seemed mostly rural much like many in the Rochmond fief but it benefited from the proximity to the excellent hunting grounds the forest offered in the region. Owain had bidden Moira to wrap a scarf around her prominent hair and was gently leading her through the darkening streets towards the small Inn.

He had hoped they would find it all but empty, ready to accept two strangers in the night if they had the coin. When he opened the door however, a flood of chatter came wafting out of the place like a bad smell. Moira stiffened in his arm. There were so many things they had never bothered to think about before they’d run away that night. For a moment, he squeezed her tightly and then led her inside. It wasn’t as dingy as he might have expected and a good number of men were sitting by the bar over a drink sharing exaggerated hunting stories.

“A room for the night?” He asked the bar-maid, who eyed them suspiciously. It was hard not to recognize Owain for what he was. With his stature, he towered over most men and there was a certain slant to Blaidyn features, a sharpness in the cheeks; the nose was large and elegant and they simply moved differently than humans. In completely rural areas he sometimes went unrecognized because the uneducated peasants still believed Blaidyn had claws and muzzles like their dogs, but it took only one glance at the woman behind the counter to know that she knew better. Carefully, she set down the mug she had been polishing with an old rag and her eyes fell on Moira. Anger boiled in Owain’s gut when he saw the hint of disgust she couldn’t hide.

Owain exhaled, his arm fell from around her shoulders and he took a step forward, allowing her to fade a little into the broad shadow he cast.

“I am tasked to accompany this young woman to her relatives in the capital,” he explained quickly, in that way Moira had come to recognize as an attempt to sound more human. It cut most of the growling grumble from the tone and he even managed to hide most of the Blaidyn accent she found so attractive in him.

The innkeeper took one look at their muddy clothes and the huge pack on his shoulders and then raised a brow.

“Yer far off the path, wolf, quickest way to Lauryl is down the river. Everybody knows that.”

A growl rose in his chest but he managed to control it.

“Our travels must remain hidden from certain people,” he finally said quite smoothly, “hence the expense of my protection.”

Again her eyes swept over both of them but when he pulled out their purse, she shrugged. She had a living to make like everybody else. He pulled out two coins and pushed them over the counter, in return she gave him a key. Owain exhaled a well-concealed sigh of relief. Even Moira managed a small smile.

“Oy, wolf-whore,” a voice suddenly sounded from off to the side. It was a drunk voice, slurred and wet. Moira spun around and Owain winced. It would have been better for their cover if she hadn’t reacted but his own anger was quick to rise as well.

“I for one…” the drunk continued loudly and a moment later all eyes were on them. The chatter had died down and Owain exhaled a silent prayer to the moon.

“I for one,” the drunk repeated, “think it’s a bloody disgrace… yer a perfectly adequate maid. I bet lots of real men would have ye.”

“You think if we bring ‘er down to the stables, she’d fuck them horses, too?” another voice could be heard and one of the tables erupted in harsh, loud cackles. Almost too late, Owain took a threatening step between Moira and the men. He could feel her shivering behind him, gasping for air every now and again. Strangers, always strangers. It was hard to believe sometimes that she was genuinely happy to be alone with him in the woods for days and days but in that moment it was easier to fathom.

He pinned them down with his gaze for a few long heartbeats, and then he let his eyes flicker into the wolfish silver. Once they flinched, he turned back to Moira and led her towards the stairs. They didn’t linger to find out whether the innkeeper had changed her mind.

Laila Blake is an author, linguist and translator. She writes character-driven love stories, co-hosts the podcast Lilt and blogs about writing, feminism and society. Her work has been featured in numerous anthologies. Keeping a balance between her different interests, Laila Blake’s body of work encompasses literary erotica, romance, and various fields in speculative fiction (dystopian/post-apocalypse, fantasy, paranormal romance and urban fantasy) and she adores finding ways to mix and match. A self-proclaimed nerd, she lives in Cologne/Germany, harbors a deep fondness for obscure folk singers and plays the guitar. She loves photography, science documentaries and classic literature, as well as Doctor Who, Game of Thrones and The Big Bang Theory. You can find her across the web. To stay up to date with her most recent publications, please consider signing up for her spam-free newsletter. 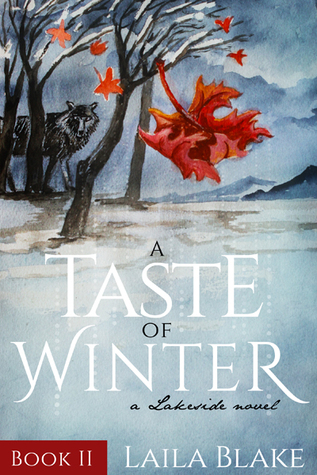 Picking up where BY THE LIGHT OF THE MOON left off, A TASTE OF WINTER is the second book in a romantic paranormal fantasy trilogy, set in alternate history medieval times. It follows the life of young Moira, a half fae noblewoman who fell in love with her shape-shifter guard and ran away from her ancestral home.

Traveling the country, searching for a safe place to stay, the two of them soon realize that life is not as kind to them as they might have hoped. They feel the sting of prejudice and bigotry in each town they visit, and the reality of poverty and winter begin to erode Moira and Owain’s blossoming love.

In the castle they left behind, darker plans are afoot. The fae spy Brody is slowly taking over, and he has no love for humans. He needs to be stopped before he can seize power and trigger another war between the races. But Moira and Owain are long gone, and Brody always seems two steps ahead.

I’ve rarely seen an author stick with the same couple throughout a Paranormal Romance series, and even though Moira & Owain’s HEA wasn’t 100% resolved when BY THE LIGHT OF THE MOON concluded, it had still reached a point that I was satisfied with. In this installment readers reconnect with the love struck duo who are now on the run because of their taboo mating, and although I enjoyed a number of aspects of this story, as a whole I found it somewhat lacking in the excitement department. I liked learning more about the heroine’s origins, the fae elements were fascinating, and Laila Blake’s werewolves are undoubtedly smexy, however three quarters of this novel revolved around the protagonists bumbling their way through the woods which was… boring. As a result, A TASTE OF WINTER didn’t quite live-up to this series’ debut.

Due to publications issues, the time elapsed between the first and second installments was pretty significant, so I was happy that the author gave me ample opportunity to refamiliarize myself with the characters, and her LAKESIDE universe. I liked that we got to peek-in on Maeve, Moira’s mother, and gain a better understanding of her coloured past. She and her daughter have something in common in that they both fell in love with an off-limits male, but that’s where their similarities ended because Maeve’s tale is as far from happily-ever-after as you can get. Her character had to make some really tough decisions, and sacrifice her own romance for her children’s safety; I had previously doubted her motivations, however that’s no longer the case. I was also pleased to discover that not all of Blake’s fae are evil.

The chemistry between Moira & Owain was one of the high points of book 1, and I enjoyed this element even more the second time around. My main complaint about the previous installment was the lack of bedroom action, so I was thrilled that the author poured on the steam in this latest addition. The couple underwent an interesting role reversal too because the Blaidyn gets captured, is severely injured, and the heroine is forced to not only save his werewolf hide, but also nurse him back to health. This showed great character growth on Moira’s part, she’s come a long way from the soft noblewoman she started out as in BY THE LIGHT OF THE MOON. That being said, after a while this shift got old, I missed Owain’s alpha maleness, and the one-the-run story line grew rather tiresome after 150+ pages.

Once the POV shifted to Rochmond’s castle, things got a lot more interesting. I disliked Brock/Brody in the first novel, but in this one I downright hated him! The author succeeded in creating a loathsome villain while also weaving in some gripping fae politics, it’s just too bad that this aspect wasn’t at the center of the plot. I’m sure you’re all familiar with changeling lore, however Blake added a unique twist which was downright freaky. I wasn’t overly fond of Iris in the previous book, but her character definitely redeemed herself in this tale. Niamh’s intentions still remain unclear, and I confess that I’m not exactly sure how this trilogy is going to end. Two babies are born, one of evil and one of light, but unless some major time jumping happens I can’t see how either of them will determine the fate of LAKESIDE.

A TASTE OF WINTER had some pleasing elements, and Laila Blake’s writing continues to delight, but as a whole it was borderline filler.


Was this review helpful? If so, please consider voting for it on Amazon or like it on GoodReads!

32 responses to “Review and Excerpt: A Taste of Winter by Laila Blake”