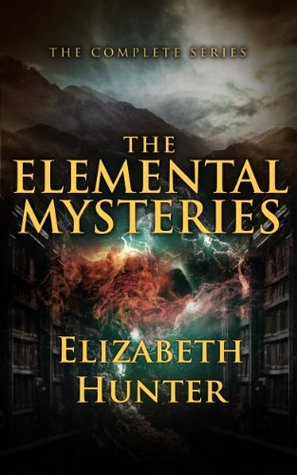 For the first time ever, get all of the best-selling Elemental Mysteries in one limited edition bundle. All four books, along with a brand new novella and other bonus content.

Welcome to the ELEMENTAL MYSTERIES, where history, romance, and the paranormal collide, and where no secret stays hidden forever. Join five hundred year old rare book dealer, Giovanni Vecchio, and librarian, Beatrice De Novo, as they travel the world in search of the mystery that brought them together, the same mystery that could tear everything they love apart.

When I said that Desert Bound (Cambio Springs #2) was so good, that I had to reread Hunter’s other series . . . I was not lying.

When we first meet Beatrice De Novo, she is a college student with a part time job at the library. She likes to wear black and doc martins with skirts. She goes to Tuesday night dinners with her grandmother and several of her grandmother’s elderly friends.

If you’re like me, that’s all you need to know, but there’s MORE. And let’s be honest–there needs to be, b/c every single vampire out there is smokin’ hot, super rich, super powerful, etc., ad nauseam.

Gio walks a fine line between dominant caveman alpha and sophisticated modern male. Beyond that, Hunter has created a world in which vampires are sired to one of the four elements upon awakening from their transformation, and Gio is a (rare) fire elemental.

FIRE. One of only a handful of ways to kill a vampire.

But that’s not all.

Gio is a scholar and a collector and trader of rare books. He meets Beatrice when she takes over the night shift for one of her fellow librarians, but when some valuable letters are donated to B’s university . . . letters that have nothing to do with any of the university’s areas of study . . . letters that belonged to Gio’s personnel collection, thought to have been destroyed in the Bonfire of Vanities . . .

Add to that the death of B’s father, under mysterious circumstances, ten years prior in Italy . . .  and Gio is wise to suspect something is afoot.

By that point, he’s already recruited Beatrice as a research assistant after being forced to reveal his true nature to her—something she handled surprisingly well—and with the revelation that his priceless collection may be intact, we are thrown headlong into a mystery that spans centuries and crosses all ethnic boundaries. A mystery combining lost knowledge, alchemy, bitter rivalries, insatiable greed, and the thirst for power.

And what kind of Big Deal/Save the World mystery would it be if Beatrice and Giovanni could solve it by themselves?

I don’t know, but thankfully, not this one. *grins* Throughout the series, we’re introduced to delightfully complex and entertaining characters. Characters we want to have their own happy ending . . . *winks*

SO. If you didn’t already notice the outrageous page count, know that this is a FOUR BOOK series. Four books, plus a novella, plus a handful of extras. For those of you who hate waiting between installments, the good news is that this is a finished series. ALSO good news is that if you are (rightfully) daunted by the nearly 1500 pages (by my calculation), the first book, A Hidden Fire, is available for FREE every-dang-where. That hyperlink will take you to Amazon, but you can get it from Barnes & Noble, Book Depo, Kobo, etc. In fact, the Kobo link at the top of the post will take you to the first book, b/c the series bundle is only available at B&N and Amazon.

I’ll admit that the first time I read A Hidden Fire, I was a bit frustrated with the ending. Gio was irritatingly stalwart in his decision to not pursue Beatrice romantically despite the A. the combustible chemistry between them, B. the obvious depth of both of their feelings, and C. what we, as readers, recognize as inevitability. I also didn’t get that the sole reason Gio was searching for his lost books was b/c lost books. I kept waiting for this Big Secret about the collection to be revealed, and that didn’t happen. However, it’s entirely possible that that’s either on me, or it was intentional, b/c the first book is FREE.

An author’s got to eat, right?  Can’t eat on the proceeds of FREE books. Gotta hook those readers.

I read them all back-to-back, and then immediately read the first book in the spin-off PNR series, Elemental World.

What can I say? I loved it. Even more this second time, and that rarely happens. Once again, first book is FREE, so get on that. *shoos* I leave you now with my favorite quote:

. . . “I recognized you. Here.” He leaned down and kissed her forehead, then let his finger trail down her nose, over the slight bump and down around her lips. His fingertips danced across her bare skin until they rested lightly over her heart. “And here. I recognized you. Your mind. Your heart. We recognized each other.”

“One soul. Two bodies. My soul recognized its own.”