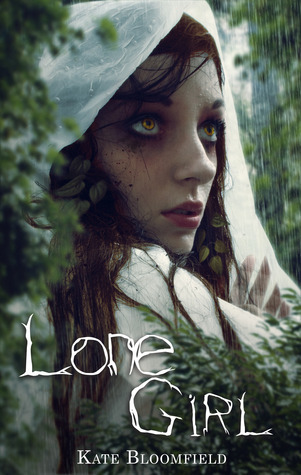 Eighteen year old Rose Goldman is on the run with former teacher Thomas Stone. Heading north towards a rumored Werewolf civilization, they are determined to stay together and make their controversial relationship work despite being hunted by the law. However, Rose soon fears that Tom regrets his decision to run with her as he realizes the danger he has put her in.

Warning: This novel contains material not suitable for persons under 18 years old such as sex scenes and coarse language.

Kate Bloomfield’s werewolves were an unexpected favourite of mine last year, and I was really hoping that this sequel would prove to be just as shockingly wonderful as ALPHA GIRL. Rose now finds herself on the run with Tom, a man who’s not only twice her age, but also a convicted sex offender, and a recent jail escapee. The first couple of chapters were a rush with police chases, car theft, shoot-outs, and helped to further reinforce the taboo-ness of the protagonists’ love story. The plot could have gone in so many directions after that what with Stone having possibly turned a prison guard, and the rumours surrounding an Alaskan pack. Instead, the author decided to split the duo up because of a rookie mistake that any eighteen year old with a smartphone should be aware of, and then a government conspiracy thread surfaced which has become so predictable in this genre that it’s practically a cliché.

Rose and Tom’s student / teacher relationship was disturbingly irresistible in book 1, and readers had to come to terms with its many prohibited facets; however in LONE GIRL Bloomfield pushed things too far in my opinion. I’ve reluctantly accepted the age difference and weird power dynamics, but in this installment Stone mentioned that they have yet to use a condom. I realize that this series isn’t intended for younger audiences, and that the author enjoys pushing all kinds of no-no buttons, but why go there? I was ok with all-of-the-above, yet the blatant disregard of practicing safe sex, especially given the circumstances, was just plain irresponsible and unnecessary. Not to mention both of the characters’ blasé attitude towards teenage pregnancy. It certainly didn’t add anything to the story, and only succeeded in pissing me off.

The cops uncover their whereabouts because Rose ignores Tom’s warning about the authorities being able to track them via her phone, and after the whole condom thing, this pushed the heroine into too stupid to live territory. I understand that she’s young and naive, but what teenager doesn’t know this? Then Stone gets pissed at Goldman for being a kid—newsflash she IS a kid—and then abandons her on the side of the road. Now we have not one, but two TSTL characters. Crappy parental figures is a personal hang-up of mine in the Young / New Adult genres, and Rose’s mom and dad were real winners in book 1, and continued to impress in 2. The poor girl gets into a car crash while hitchhiking home after her lover ditches her, ends up in a coma for sixteen days, and her mother refuses to take her back. So, Goldman moves to California with her father, things go horribly awry during the full moon; her dad buys a one-way plane ticket to Alaska, and wishes her good luck finding the pack. Wow.

I have yet to say anything positive about this novel, and you’re probably wondering why I gave it 2.5 stars. Well, it wasn’t all bad, we learn some interesting things about this universe’s werewolves including that they don’t all share the same abilities, and that heightened senses aren’t necessarily a guarantee. Also, born wolves can’t change others, and only 2% of those bitten actually survive their first shift. So yeah, the mythology’s original, the plot had no major holes, and the writing/editing was good. You’ve most likely already guessed at what awaited Rose in Alaska because as I mentioned, the government angle was foreseeable to a fault. There was however, a couple of curve balls thrown in towards the end, and the story concluded on a cliffhanger. URGH! I’m undecided as to whether I’ll be continuing this series, but if it’s slated to be a trilogy I just might because I’ve made it this far.

LONE GIRL fell victim to the dreaded sequel syndrome, so here’s hoping that WILD GIRL will be the cure.