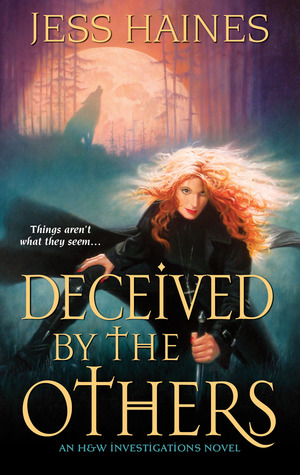 They're here, and they're real. . .werewolves, vampires, mages, and other creatures of the night. For New York P.I. Shiarra Waynest, taking care of Others business started out as a way to stay solvent. But now business is getting very, very complicated. . .

Shiarra's relationship with sexy werewolf Chaz may be somewhat unconventional. Still, after a few bumps, Shia is finally ready to get serious. That means meeting family—or in this case, bringing Chaz's entire werewolf pack along for a rollicking full-moon weekend in the Catskills.

Soon after they arrive, threatening notes appear, warning Chaz to go home. Then their cabin is ransacked. Shia starts digging to find out whether it's the work of upstart teenaged werewolves or something more sinister. Yet as rumors about her vampire connections arouse the pack's hostility, Shia has to contend with other dangers. Not just from an adversary about to make his fatal intentions known, but from a threat that's even closer than she knows. . .

When I first dived into this book, my initial thought was ‘oh great, another heroine takes a vacay story.’ This type of plot line seems to be a requirement in every Urban Fantasy series, and yet rarely turns out well. That is, until Jess Haines got a hold of it, and used it to transform the H&W INVESTIGATIONS universe from pretty good to fan-freaking-tastic! This was no holds barred my favourite installment yet with oodles of intrigue, betrayal, and mettle. You’re probably thinking that the werewolves had something to do with my 5-star rating, what with me being obsessed with them and all, but that actually couldn’t be further from the truth in this particular instance. Weird, I know, however Chaz has rubbed me the wrong way since day one, and in DECEIVED BY THE OTHERS he finally showed his cards.

This novel was more complex than the two previous ones in that there were multiple plot threads, and the overall mystery wasn’t as clear cut. Chaz and Shia’s relationship was at the fore, but there was also dissension within the Sunstriker ranks, and a pack of misfit weres out for revenge. The latter introduced three new supes to the paranormal smorgasbord along with equally wacky characters to match their unusual animals while the former helped put things like shifter hierarchy, and right of ascension into perspective. The second half of this story was brilliantly paced, and succeeded in really grabbing my attention, although I can’t say why without giving anything away, and this particular tale is best experienced blind in order for the FEELS to have their full effect.

Waynest has come a long way since HUNTED BY THE OTHERS both as a character, and as a hunter, but in this installment she was something else! I loved how well she handled everything the pack threw at her from power struggles, to hurtful insults, to rumours. At one point she does have a massive meltdown, although in this particular instance I think that it was justified, and the scorned girlfriend in me couldn’t resist egging her on. I also liked how Shia explored all of her options when confronted with a particularly troublesome problem; however her final decision surprised me even though it was ultimately super badass. Thankfully, I already have STALKING THE OTHERS on my eReader because after that ending I need to read it RIGHT NOW!

I missed Shia’s entourage in this installment; Sara, Arnold, and Royce do make appearances, but their contributions were small. Alec’s actions dumbfounded me, I mean he IS a vampire after all, and granted he probably does have ulterior motives, yet for the time being I’m firmly on his team. I really hope that the whole Dillon thing doesn’t come to pass because even though I fully expect this series to go that route eventually, I think it’s a little premature. We learn some shocking truths about Chaz—I just knew that he was too good to be true—and the riddle surrounding Waynest’s mysterious cabbie is finally solved, oh and his name is Mario!

DECEIVED BY THE OTHERS was superbly written with action out the wazoo; I can’t recommend it enough!

57 responses to “Review: Deceived by the Others by Jess Haines”