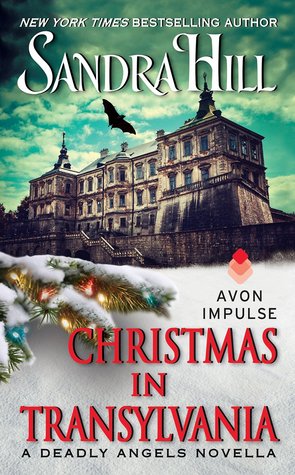 For the first time ever, the leader of the Viking Vampire Angels, Vikar Sigurdsson, has been talked into celebrating a traditional Christmas! The tree has been decorated, the gifts have been wrapped, and the stockings have been hung. And that's mistletoe, not cobwebs, hanging from the ceiling of the creepy castle full of vangels … really!

The icing on the vampire cookie comes when vangel Karl Mortensen rescues Faith Larson, a battered young waitress, from her abusive boyfriend and hides her in the castle amidst the Christmas chaos. But what Karl thought was a frail young teenager is actually a very tempting woman. And she thinks his fangs are sexy!

But a strange "Christmas visitor" at the castle and demon vampires up to their old tricks could threaten the budding romance between Karl and Faith. It's an impossible match—a human and a vangel—but Christmas is a time for magic.

I don’t think I have ever read a Christmas paranormal book or novella until a couple of weeks ago. Christmas and paranormal doesn’t exactly go together. This novella really showed me how it can be done, and done well.

Transylvania, Pennsylvania. Yes, this is the setting of this story. It’s a few weeks before Christmas, and the Viking vangels( immortal vampire angels)have decided to do up Christmas right this year. Since they live in a castle, this includes huge trees, wreaths, presents, and Alvin and the Chipmunks Christmas carols playing. That last one is courtesy of the little children of the household, and was the bane of the adults life. Karl is just one of the many vangels that live in the castle. While out for coffee, he hears that the waitress that usually waits on him is out sick, only the other waitress thinks her boyfriend has beaten her again. Of course Karl goes to find her and decides to take her home with him to the castle, even though she’s human. Faith has been beaten both by her boyfriend, and by life. When she meets Karl, she starts thinking that maybe there is good in life after all. And so what if he’s a vampire angel, her boyfriend was the evil one, not Karl.

This ended up being such a fun read. I had never read any of the other books in this series, but I found myself looking up the books immediately upon finishing this, because I had enjoyed it so much. The characters were amusing, and there was so many in the story that you just know have had their own previous books, or will be getting one. I am sure if you read this series, you will enjoy every minute of seeing the other characters that you have met before. I thought they were all pretty great, including the real Lizzie Borden, now a vangel. That one gave me pause, but ended up being just another fun part of the read.

Okay so, Viking vampire angels? This was a new one for me, but there is some world building as far as explaining how they exist, and some other interesting details as well. For a novella, it was just enough. It was also enough to intrigue me enough to want to try another one by this author.

I found this to be well written, and had plenty of Christmas oriented details to make this a good holiday read. If you are looking for an adult, Christmas read, I can highly recommend this one.

28 responses to “Review: Christmas in Transylvania by Sandra Hill”