The first book in author Lashell Collins’ LUNAR FALLS series, SECRETS OF LUNAR FALLS, hit shelves on Halloween, so I hope you’ll join me in showing this indie author some Rabid love! I have an excerpt, review, and giveaway for you. Shout out to Ingenious Indie Promotions for this wonderful opportunity!

Hidden in the dense brush, he watched as the hybrid ran toward her and followed her back into the house. Then he stayed close by until he felt her fear dissipating. He hadn’t meant to frighten her. He hadn’t meant for her to sense him at all, he only wanted to check on her, make sure she was okay, just as he had done each night from the moment they’d met. And being completely honest with himself, he knew that he’d just wanted to see her. If only for a moment.

He rose from his crouching position and stood on two legs, sniffing the air and catching her delicious scent. Then he drew in a deep breath and let it out in a frustrated huff that sounded more like a growl than a sigh.

Inside the house Carly attempted to let the strange sensation go as she readied herself for bed, but when she slipped between the sheets she had difficulty falling asleep. She tossed and turned for nearly half an hour before finally drifting off. But the memory of her sensual experience in the garden lingered, even in her dreams, and Carly soon found herself in the woods at Wolf Creek, running.

She was wearing a knee-length billowy night gown and running barefoot among the trees, a smile on her face as she relished the tingle on her skin. She looked up at the bright, shining moon as she ran through the woods, and she laughed. The sound echoed all around them.

She wasn’t alone. She smiled at the wolves running all around her, running with her. She was one of them, wild and free, and they ran and ran for what seemed like hours.

Then she was standing in a clearing of the forest, her canine companions milling about around her. One of them, a large black wolf with glowing gray eyes, stepped out from among the others and walked toward her. She reached out to him, staring into his smoky eyes, and suddenly he wasn’t a wolf anymore. He was a man, crouched down before her. She smiled as Gabe Masters slowly stood, completely naked, looming tall and imposing as he stared down into her eyes. She felt his hands running along her now naked body, heating her still tingling skin. Then his hands were in her hair as he gently pulled her head back. He leaned in close, his lips and his nose lightly brushing over her skin as he sniffed her neck, inhaling deeply. An act that caused her body to shiver. Then his tongue retraced the path his nose had just taken, running from the base of her neck all the way up to the back of her ear, and she moaned loudly.

“Shit. What is wrong with me?” she mumbled to herself.

Throwing back the covers, she got out of the bed and pulled her nightshirt over her head, stripping naked, save for the tiger’s eye necklace she rarely took off. She walked over to the armoire and opened the door of the wardrobe and took out a fresh nightgown, slipping it over her head. Then she tossed the damp one into the hamper on her way out of the room.

She walked through the dark house to the kitchen and opened the freezer, reaching in to grab a single cube of ice. Then she ran the frozen sliver of relief across her chest in an effort to cool off as she tried to push the enticing image of Gabe Masters licking her neck from her mind.

Outside, not twenty feet away, he sat at her back door, feeling her nearness. Smelling her arousal as it mingled with her mouth-watering scent and wafted through the open kitchen window. And as he sat there reveling in the essence of her, he wondered what it would feel like to really run his tongue along her beautiful neck. 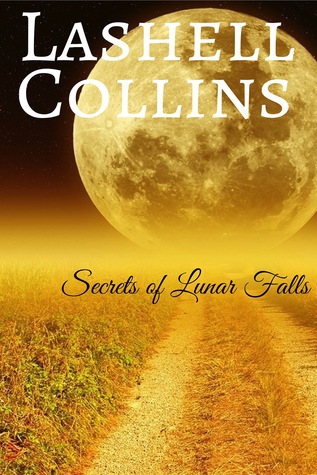 When veterinarian, Dr. Carly Tipton, takes a new job in the tiny farming community of Lunar Falls, she expects to build a new life for herself. She expects to meet new people and have new experiences. Maybe she’s even expecting a little adventure. But what she’s not expecting is to fall head over heels in love – not with the town, and certainly not with its ruggedly sexy sheriff, Gabriel Masters. She’s also not expecting all the secrets Lunar Falls is hiding. Secrets that could destroy everything she ever believed was true about her own heritage and the family she left back home.

Gabe isn’t ready for Carly when she blows into town. That woman has the power to bring him – a man born and raised to be a GrandAlpha – to his knees, and she’s human! That simple fact alone makes her dangerous to Gabe’s position within the pack. But the fact that he can’t seem to stay away from her tells him that this woman is the one. Human or not … she’s his mate. And now Gabe has to find a way to make their bonding complete without sparking a civil war among his people.

Secrets of Lunar Falls is book one of an adult, sexy shifter romance trilogy.


I have been reading way more than my share of werewolf, and shifter books lately, and for the most part, they have all been well written. This book is no exception, not that I needed another series to start reading, but really plan on it after reading this book!

Carly is a veterinarian that has moved from her home, across Ohio, to work for a small practice in Lunar Falls. She brings her wolf-dog hybrid, and moves into a small, charming cottage. It’s not long before she hears about the woman that killed herself outside her cottage. That’s just part of the gossip in this town, because the main gossip here, is all about werewolves. Of course to her, it’s just gossip with no truth to it. Even after a large wolf saves her life one day, it never occurs to her that it might be real. She meets the town sheriff, Gabe, and things start to get really strange. For some reason, she is able to feel him in her skin whenever she comes anywhere near him. For Gage, a werewolf, Carly just means one thing to him-Mate.

World building in this book is rich with legends, history, and intricate details of werewolf life. It’s always interesting to see how an author handles all the world building details, and Ms. Collins definitely didn’t disappoint. In fact I think this book had more world building then a lot of werewolf books that I have read. One of the more interesting aspects dealt with race purity in bonding, no matter who the werewolf’s mate is, or as it’s called here, imprinting. Imprinting is to be ignored, unless it’s with a pure blood werewolf. As you can imagine, it causes major problems, and heartbreak.

For the most part, I liked Carly’s character, although at times she manages to cause problems because she just won’t listen, and does things that she shouldn’t. I know it makes the story move along, but she made me mad at least a couple of times, with these almost(but not quite) too stupid to live moments. It could also be called being headstrong. But it was only a couple of moments, so I can look beyond that. I thought Gage was the perfect Alpha male, or as in this case, he is the Grand Alpha over all five of the packs in Ohio. He’s not all powerful however, and there is a council of elders that keeps him in check. Just more of that world building!

Romance plays a big part in this story, but so do power struggles, lots of unhappy werewolves due to the racial issues, and even jealousy over Gage’s position. And before it’s all over with, a mystery enters into the story, and so does a different kind of shifter. There’s villains in this story of course, and we do find out who is causing the problems, although it was kind of transparent all along, in my opinion.

It was a fast, easy, adult read, and it kept me entertained throughout. I am looking forward to reading the next book, Lies of Lunar Falls, when it comes out this January, because there’s still a lot of story to be told.

18 responses to “Tour Stop and Review: Secrets of Lunar Falls by Lashell Collins”