The charming medieval city of Bruges, Belgium may seem like an unusual setting for an urban fantasy novel. The city is known for its tranquil canals, historic buildings, and romantic vistas. But the moment I saw a picture of Bruges, my mind began populating its cobblestone streets with bloodthirsty vampires, flesh eating ghouls, monstrous fae, and wailing ghosts.

Imagine my surprise when I discovered that there really was something sinister in the city’s bloody history. My research into Bruges began in earnest, and last year I completed my book research with a trip to Belgium. The pictures included with this post are from that research trip. These photos are taken during daylight hours, but I can assure you that the atmosphere becomes decidedly spooky when the sun goes down over West Flanders. Do ghosts walk the streets of Bruges? I will let you decide.


1- The Canals
The canals play an important part in my novel, Hunting in Bruges. Jenna Lehane, a Hunter with a troubled past, arrives in Bruges to discover that something is killing humans and disposing of their bodies in the canals. Not only are the canals filling with corpses, but there are supernatural horrors that call the canals their home. While I was visiting Bruges, the canals were the watery grave for more than one unfortunate creature. Did these ducks, pigeons, and small mammals die from natural causes, or is there something deadly lurking within these dark waters? 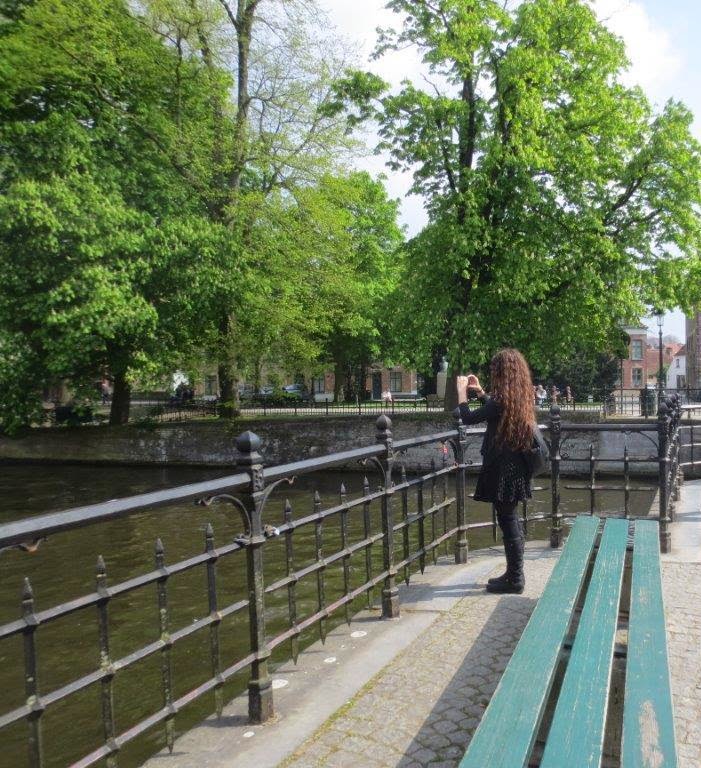 I have to admit that I was completely unprepared for the experience I had within the stone walls of Jerusalem Church. The macabre altarpiece and tomb were ghoulish, but the truly terrifying part of this church lay in a crawlspace in the vaulted chapel in the back. A cloth wrapped body is on display, and though I’ve read that this is a replica of Christ’s tomb, there is something chilling about that small chamber. My travel companion bolted out the door…and I wasn’t far behind. (Note: No pictures came out of the rear tomb. The photos were completely black.) 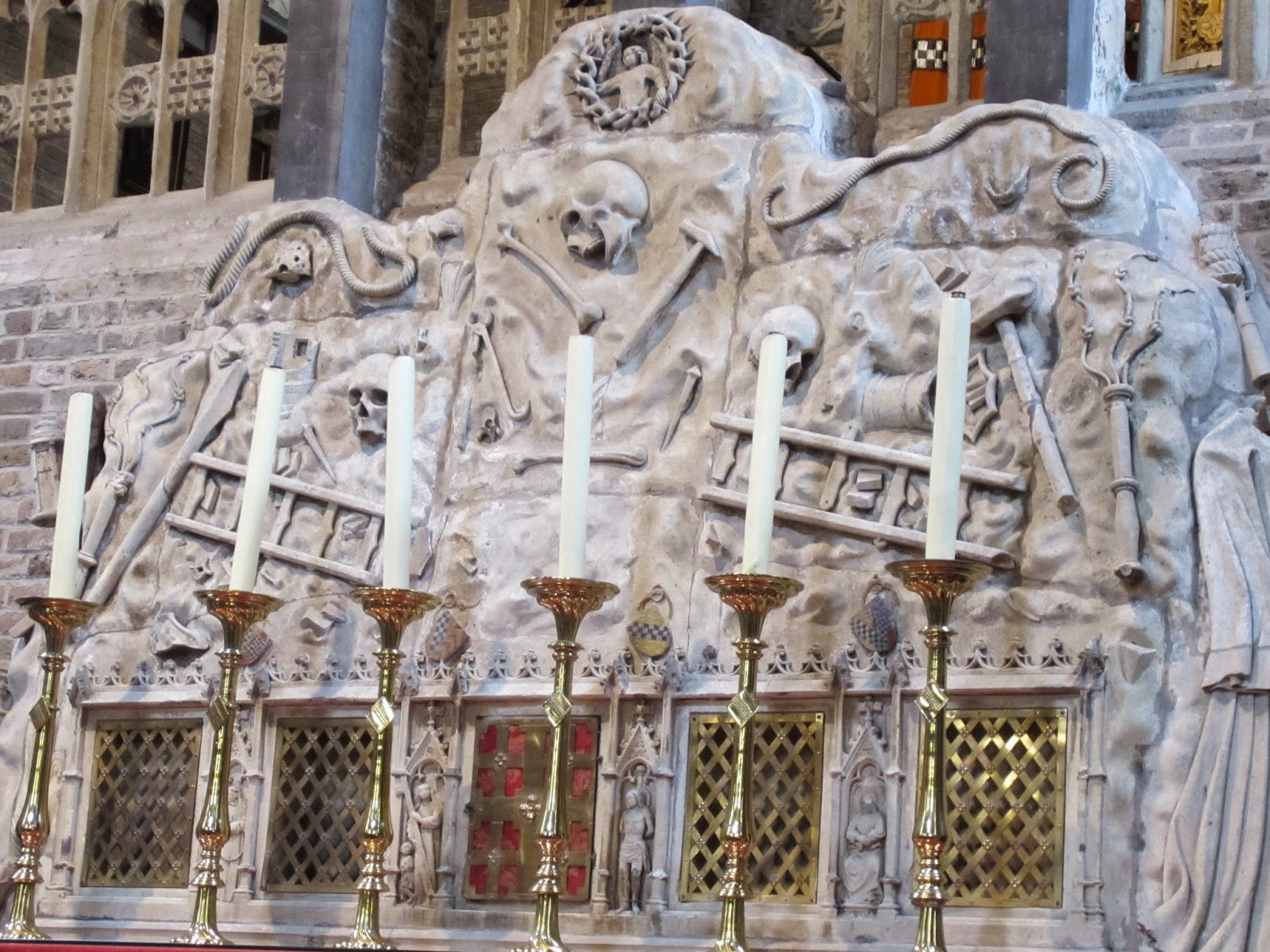 Beguines were lay sisters who lived and dressed as nuns, but did not take vows. The Beguinage continues to be a place of silence within the bustling city–a silence that can seem downright eerie. During my trip, the courtyard was filled with a field of wilting daffodils. Beauty with an edge of decay seemed to be the common theme of this place. One house has been preserved in its original rustic state and visitors can wander the maze of tiny rooms filled with antique furniture and aging lace to see the way in which the Beguines lived. I swear that someone, or something, was watching me during my entire visit. With every creak of the old wooden floors, my unease grew and I made a hasty retreat to Minnewater Park. 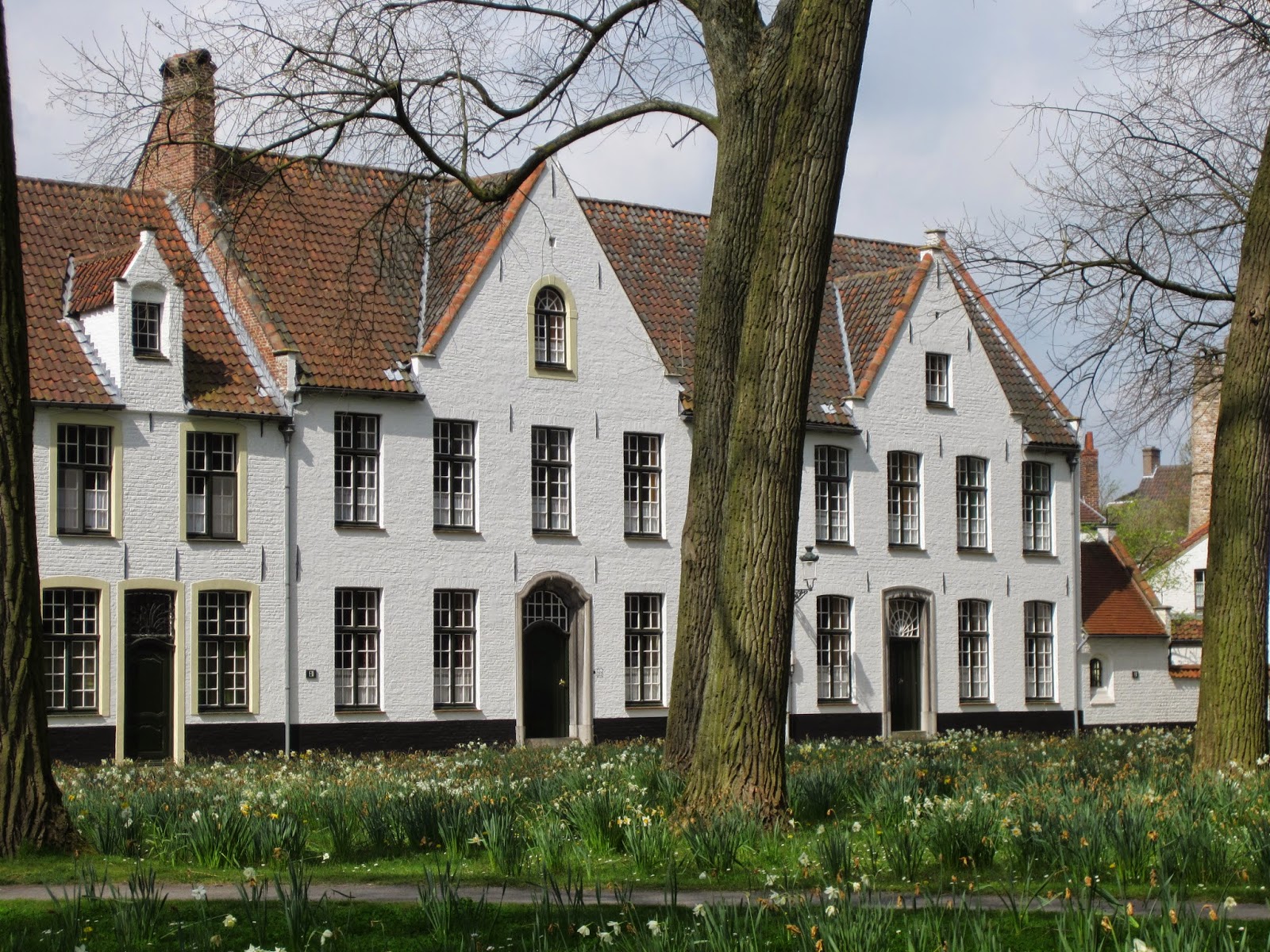 4- Basilica of the Holy Blood (Heilig-Bloedbasiliek) 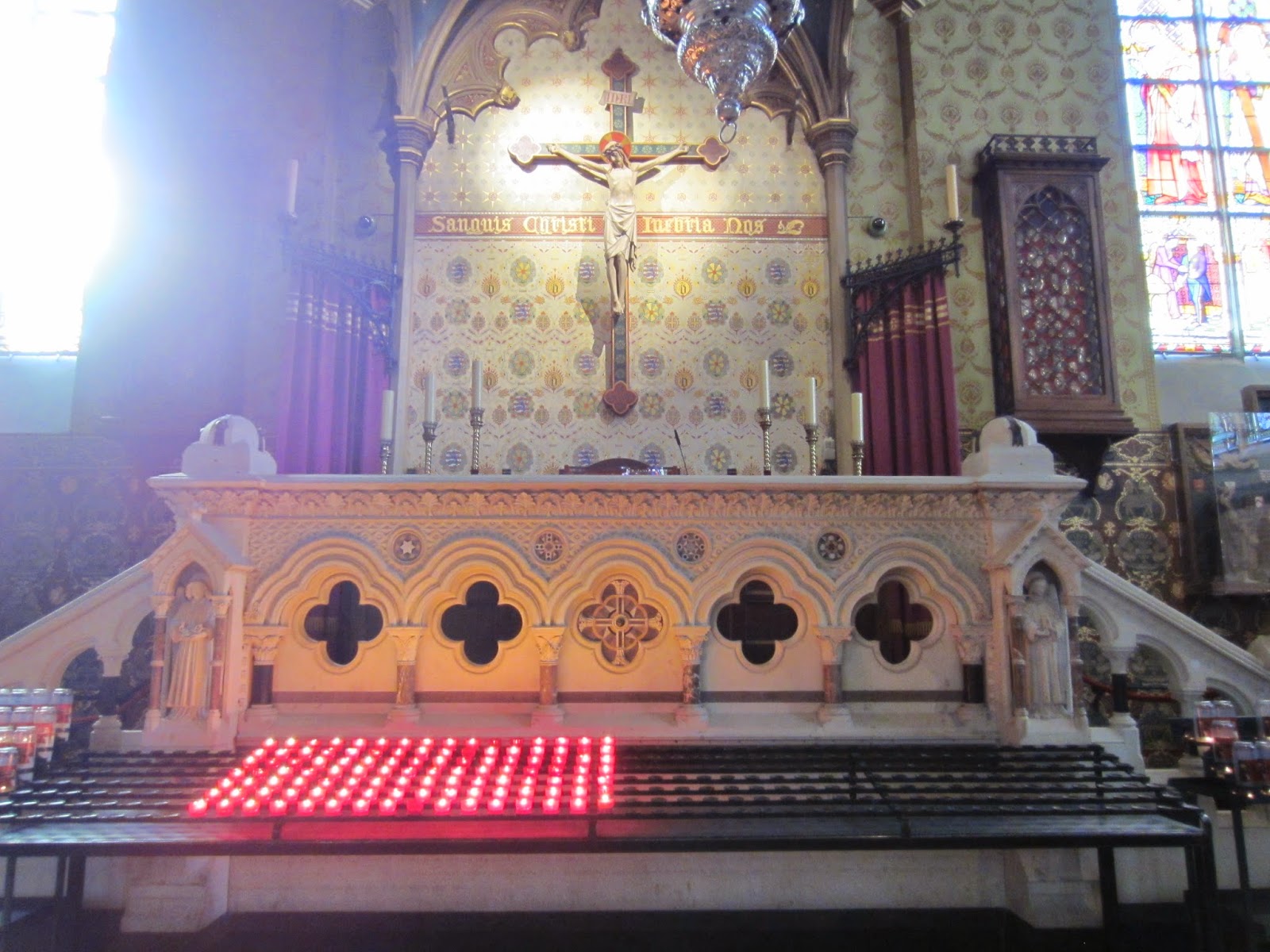 This place is not for the faint of heart. The 11th century hospital is one of the oldest in Europe and contains the often grotesque artwork of Hans Memling, as well as many antique surgical implements. The artwork and objects of torture are absolutely horrifying and the depictions of nuns in their traditional garb had me jumping at my shadow. 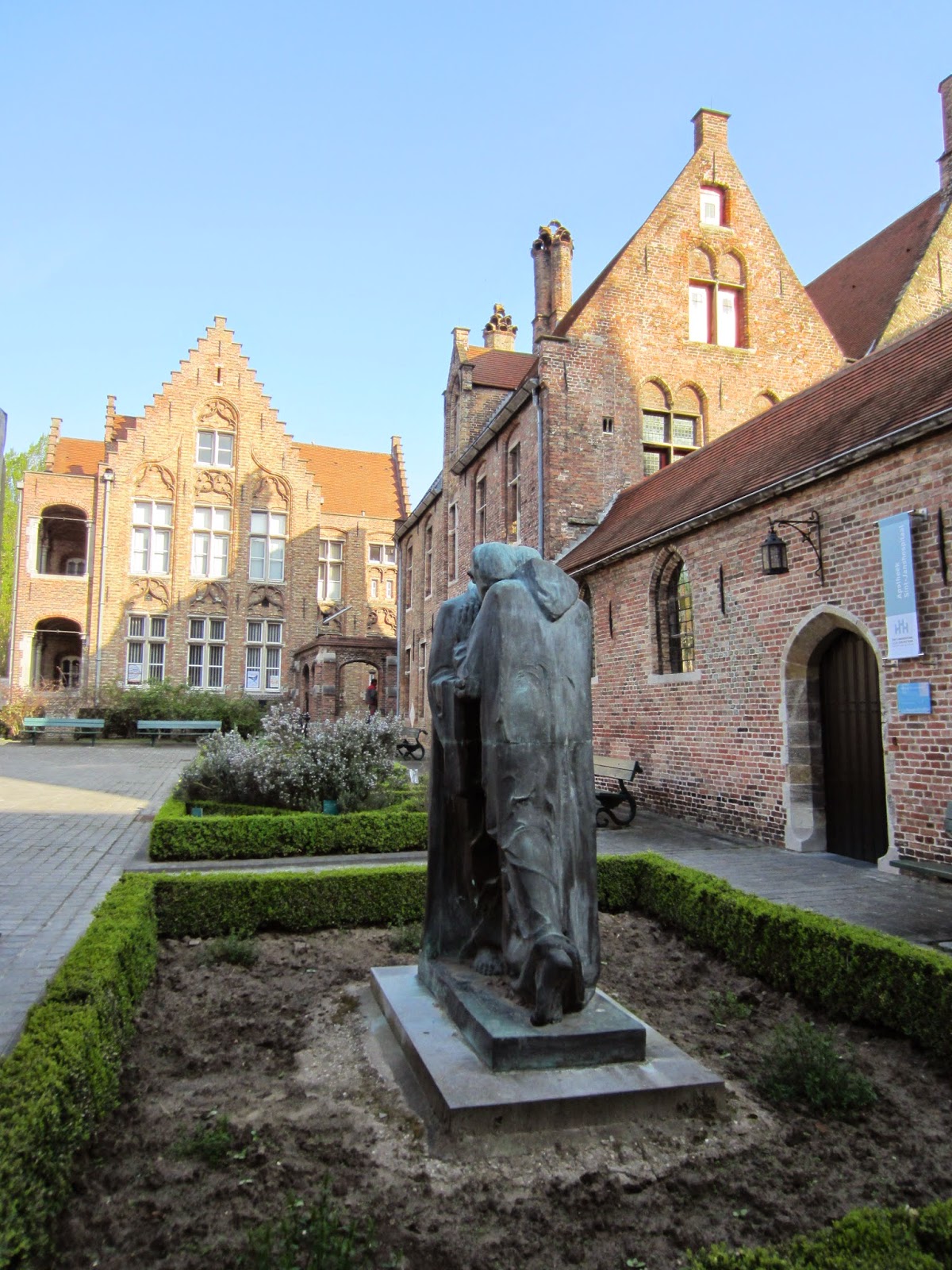 Another five notable places to add to any ghost tour of Bruges are the Spookhuis, Retsin’s Lucifernum, Belfort, Blind Donkey Alley, and a viewing of Heironymous Bosch’s haunting triptych The Last Judgement at the Groeningemuseum.

E.J. Stevens is the author of the Spirit Guide young adult series, the bestselling Ivy Granger urban fantasy series, and the Hunters’ Guild urban fantasy series. When E.J. isn’t at her writing desk she enjoys dancing along seaside cliffs, singing in graveyards, and sleeping in faerie circles. E.J. currently resides in a magical forest on the coast of Maine where she finds daily inspiration for her writing. 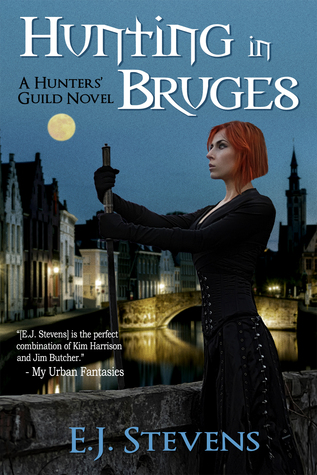 
The only thing worse than being a Hunter in the fae-ridden city of Harborsmouth, is hunting vamps in Bruges.

With a desire to prove herself, protect the innocent, and advance within the ranks of the Hunters’ Guild, Jenna Lehane hits the cobbled streets of Bruges with blades at the ready. Someone, or something, is murdering tourists and dumping their bodies in the city’s scenic canals. With the help of a mysterious stranger, Jenna begins to piece together clues that are dotted throughout the city like blood spatter.

Hunting in Bruges is the first novel in the Hunters’ Guild urban fantasy series set in the world of Ivy Granger.

Readers, was this your first visit to Bruges, Belgium? Have you experienced anything supernatural in and around Bruges? What did you think of E.J. Stevens’ picks for spooky places?